The foreign relations of Orioni are controlled by the Council of Foreign Affairs of Orioni. The country maintains diplomatic relations with all sovereign states unless noted otherwise. Orioni is a regional power in the Orient without possessing regional hegemony. During what is considered the Medieval Period in other regions, Orioni took part in the Pearl Road trade network along the entire southern coast of Europa. The earliest official Orinese foreign relations occurred in the 13th century, when the Orinese Civil War ended. These relations were focused on regaining control over areas in nearby Amutia, Meteorolas and Azania.[citation needed] A former colonial power, Orioni's relative power has decreased since the end of the colonial age.

Orioni's leaders have been frequent visitors to all parts of the Eurth. Relations with the New Wurld have varied considerably over the years. Closer to home, the country has made efforts to reduce tensions by establishing intergovernmental organisations such the Group of Island Nations (1974) and Entente of Oriental States (2006). This has added to stability on the Orient. Orioni is an advocate for regional and international cooperation, and has extradition treaties and defence agreements with other nations in the event of a crisis. Orioni has developed increasingly close ties with other Oriental nations: Tamurin, Miiros, Niederoestereich, and Bainbridge Islands.

“I am honoured to be here with you at the official signing of this grandest alliance. It is the sincere wish of the Orinese peoples that the founding of EOS will bring peace and prosperity to the entire region in general, and the eastern part of Europa in particular. […] This entente serves not only a military purpose. True, one of the strongest pillars of EOS will be its aim for better security, but I know that's something we all wish and strive for. There are so many other benefits besides security. Think, for example, of the benefits people will have when they no longer have to wait for hours to get their passport checked when travelling abroad. And the research into outer space will also receive a major boost, with the allied funding of our very own space program. […] Let us rejoice here and today about this great achievement. […] Long live peace! Long live prosperity! Long live EOS!”

One of the keys of the Orinese foreign policy since 1954 is irredentism, the idea of “Greater Orioni,” justifying the right of territorial expansions in their “historical legitimacy”.[citation needed] This implies the goal of establishing an Orinese state, which would encompassing mostly the former colonial holdings: from the Meteorolas to the west, to the Rosario Sea and San Ba in the east and from Tamurin, Mekabiri and Miiros to the north, to Tahini and Niederoestereich to the south. This new state would have O'polis as its capital.[1] The best examples are the re-integration of Rohini in 2009 and the occupation of Bainbridge Islands since 2019. Orioni has staked its territorial claims in the Oriental Ocean with a continued military presence on Burkini, in the form of a naval base in the large, eastern lagoon.[2] Orinese defence councillor Toren Nabérrie has stated the Orinese government views Burkini “as a long-term strategic partner.”[citation needed] 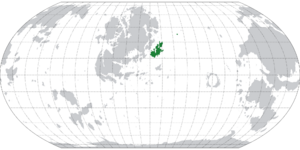 Location of Orioni on Eurth.

Orioni is a founding member of several intergovernmental organizations, trade blocs and cooperative security pacts that influence Orinese politics. It also hosts the headquarters of the Entente of Oriental States on Deseti island. The following is a list of international organisations in which Orioni officially participates or participated.

The following table explains the Orinese government's view towards other nations on the global stage. This is a list also include ambassadors of Orioni to individual nations on Eurth. In the Orioni Empire, ambassadors are envoys of the Imperial government appointed stationed in a foreign capital as the resident representative of their own government or appointed for a special and often temporary diplomatic assignment. Ambassadors are nominated by the Councillor of Foreign Affairs and confirmed by the Sibiseba. Ambassadors serve “at the pleasure of the Empress”, meaning they can be dismissed at any time.

Embassies may only be constructed in the capital city of O'polis in compliance with the policy. Consulates can be established outside the capital city, usually in regional capitals. Only low-grade light personal weapons may be carried by staff (pistols, some submachine guns, assault rifles, melee weapons). Limousines are reserved for heads of state.[4]

All nations are expected to follow the guidelines when establishing embassies and consulates. Any special requests are given consideration if listed in the attached form. Applications will be processed after submission, with full diplomatic operations possible after 6 months to 1 year (1-2 weeks).

The Orioni Empire has submitted the following table to summarise national policies concerning diplomatic immunities. Orioni expects all diplomatic staff to comply with Orioni laws. In compliance with decorum, diplomatic staff can only be prosecuted in their home country's court (expressed by their nationality) except under special circumstances as ordered by the Orioni government. Any legal actions taken against employees will require a warrant from the Imperial Court, where compliance of the guilty party is required. It should be noted that Orinese will communicate with the home nation if their diplomats have violated the law.

If the nation does not take the necessary actions to punish/prevent the offence or if the guilty party refuses summons or searches, the government of Orioni will act upon this breach of diplomatic decorum. All offenders will be given a just and fair trial, and a representative from their home country will be invited to oversee the hearing. Actions taken can be, but are not limited to: closure of diplomatic missions, deportation from Orioni as persona non grata, arrest and imprisonment, etc.

Orioni recognises that the land in which a mission is built upon remains Orinese property, but that Orioni laws are suspended within the compound as the sovereign nation's laws are applied. Permission from the sovereign nation will be requested should authorities need to step inside the embassy or consulate. Crimes committed within the compound by non-Orinese citizens are not under Orioni jurisdiction and are tried by the sovereign nation's court. If the guilty party holds Orinese citizenship, nations are requested to turn over the offenders to local authorities. It should be noted that all crimes occurring outside the compound will be tried in an Orinese court, regardless of the guilty party's nationality.