The Republic of Rohini is an island country located in the North Oriental Ocean on Eurth. Its closest neighbouring countries are Orioni to the southwest, Ide Jima and San Ba to the west, and the Sunset Sea Islands in the southeast.[1] The island is approximately 13,713 km2 (5,295 sq mi) in size and home to a little over 1,69 million people. The capital city Vali is also the country's largest city.

Rohini is a parliamentary democracy and a constitutional monarchy. The country's head of government is the governor, representing the Orinese monarch, who serves as head of state. The current monarch and head of state is Empress Joni I, and the current head of government is governor Hakim Memiri. The relatively unknown island in northern Thalassa has always known a shaky balance between ethnic and religious groups. These tensions culminated in the government topple of 2008. In 2009 the country voted to re-join the Orioni Empire as a semi-independent realm.

Rohini is an old country, yet at the same time also very modern. Since the 1980s, the country has been part of the economically fast-growing "Thalassan Tigers". Rohini has advantageous tax and finance laws. Rohini's long relationship with Orioni has had a significant impact on its economy and culture. Rohini is member of several international and intergovernmental institutions, including the Assembled Nations and Group of Island Nations.

The name Rohini comes from the Old Buranic word Rhûn (east), in relation to its location east of Burania. In Nyburanik the island is sometimes also called Ositäinen. In Oharic the name Kefīli was used until the mid-19th Century.

The Rohinese territory is situated in the Oriental Ocean on the northwestern area of the Thalassan continent. The Rohni River begins in the Kagiu Hills and flows south through Vali, ending in the Oriental Ocean. The highest point on the island is Mount Tofuji at 1,641 metres (5,384 ft). The capital and largest city is Vali (Oharic: Waliye, "to govern"). Major cities include Koli, Sakia, Kagiu and Ningma. The territory of Rohini is currently subdivided into 4 regions and 34 municipalities.

The dramatic landscape of Rohini, with its soaring cliffs, has drawn visitors to this remote island in the North Oriental Ocean for decades. But recent times have seen a sharp acceleration in tourist numbers, with an annual increase of 10% over the past five years. This increase is taking its toll on the island's natural environment. It has led to a recent decision to close popular tourist spots for non-residents while maintenance crews tend to damaged sites. 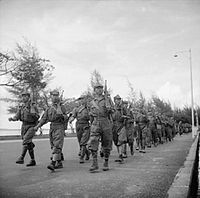 Withdrawal of Orinese troops in 1949.

Governor Memiri on campaign in 2009.

Capitol building and seat of government in Vali.

Rohini stopped being a single-party state in 1982 when Commonist Workers Party (CWP) was allowed to participate in local elections. Political reforms during the 1990s relaxed the NPR's hold on power. During the 2000s the country faced a major political challenge: for the first time since independence in 1949, the ruling NPR party was expelled from power through elections, when a governing coalition was formed between centre-left parties.

Political power lies with the presidency and the branches of government. Their power is based on a system of constitutional monarchy inherited from the Orinese colonisers with a proportional representation system. After it was granted independence from Orioni in the 1940s, Rohini has had 5 elected presidents. Presidents are limited to a maximum of 2 terms, for a duration of 6 years per term.

Red colours in a creek reveal iron oxides and tin.

Nationalisation of the RITZ.

With 1,7 million inhabitants, the Republic of Rohini is not immediately a major power in North Thalassa. Until the 1980s, Rohini was a largely agricultural country with tin mines and limited oil. The financial industry was not yet developed. The fact that most residents spoke Oharic was a major international advantage. But since the 1980s, under the direction of president Uro Cecini, the nation has been part of the economically fast-growing "Thalassan Tigers" such as Andalla, Sunset Sea Islands and Giokto. This is largely thanks to its location on the strategically very important northern archipelago between Europa and Argis. President Cecini, who governed the nation between 1985 and 1997, pushed the country towards great economic development. But he tolerated no criticism, neither domestic nor foreign.

Rohini has advantageous tax and finance laws, and is regarded as a tax haven. Its international financial centre offers amongst other things offshore banking services. It features in systems to use neutral nations with such laws to gain access to valuable foreign currency. The headquarters of RITZ is located in Vali. The Rohinese International Trade Zai or Zaibatsu was nationalised in 1949 when the nation became independent of Orioni. The government globalised its financial powers and expertise to create an economy based on offshore finance. The creation of shell corporations enables the purchase and sale of goods and currency. In 2010, Rohini was blacklisted internationally due to its alleged involvement with money laundering. Until 2011 it also offered passports to foreign nationals for a fee. Under pressure from the EOS, Rohini introduced financial transparency legislation in 2003, after which foreign dark money left the country.

The island is connected by air to major nations in Europa, Thalassa, including Orioni, Sunset Sea Islands, Andalla, Iverica and many more places. Rohini has three stations on the national train line, which connect Rohini East, Rohini West and Vali metro.

As per the 2018 census, Rohini had a total population of 1.691.876 of which 52% were males and 48% were females. The rate of literacy in Rohini was 75.28%. The population is very diverse: around 60% consists of mostly ethnic Rohinese who are culturally and ethnically related to Orinese. The distinction grew during the colonial era when the Orinese took over current Rohini. In addition, Rohini has a very large Orinese minority (more than 22%) that is mainly active in the business world. A third group are immigrants from Thalassa. Like most Orinese peoples, the Rohinese don't fit into the major ethnic categories of Europa or Thalassa. The present day population is thought to have resulted from the fusion of several immigrant groups who moved into the Oriental Ocean from both the Oriental and Thalassan directions in remote antiquity.

Rohinese culture has its roots in Orinese cultural traditions and heritage. In contrast to other Oriental countries, the Rohinese people place relatively great important on their independence and self-sufficiency. The Vali Academy of Arts was founded in 1791 and became a centre of education. The national library has helped many researchers with its rich collection of rare books. The Rohinese dialect is greatly influenced by the Oharic language after the 17th Century colonisation by Orioni. Many of the ancient oral stories and poems were preserved in written form. Rohini cuisine is famous for its various seafood restaurants, particularly cod and haddock but also salmon, with little to no use of fruits or vegetables due to the island's climate. Sport is an important part of Rohinese culture. Rugby is the national sport and draws the most spectators. Around 45% of Rohinese youth take part in sports at school