(Redirected from San)
Jump to navigation Jump to search
For the Portal page, see Portal:Eurth.

The wurld contains a large variety of nations where the people speak many languages, such as Anglish, Laimiaic, Fragran, Adapton Aromance, Suverin, Oharic, and Iverican. They also speak thousands of other languages. According to the latest census data, the Eurth is home to about 5 billion human beings.

The current Anglish word Eurth evolved from an earlier variant of Early Anglish or Old Alemmanisch. The earliest sources mention Erda, Eorðe or Jörð as a translation of Gaia in Occidental Arhoman, and Erta or Eltus in East-Arhoman. In this context, it refers to the ground or dry soil in contrast to the wet sea. In Oharic the word Alemi translates to “wurld.”

In earlier centuries, the name “Europa” was sometimes used interchangeably to refer to the entire planet. However, it only encompasses the northeastern landmass. This was a symptom of old Eurocentric arrogance. As a response to this Eurocentrism, in the 19th century the labels of “Old Wurld” and “New Wurld” were introduced.[a]

The lithosphere is the solid part of the Eurth, consisting of the crust and upper mantle. It is made up of 19 tectonic plates that move and interact with each other in a process known as plate tectonics. These plates are around 125 kilometres (78 mi) thick and can be either oceanic or continental in nature. There are many tectonic plates, and their ages can vary. Some plates may have existed for billions of years, while others may have formed more recently. The major tectonic plates, listed from largest to smallest, include the Antarctic Plate, the Thallasan Plate, and the Arcton Plate.

There is no definitive answer whether some tectonic plates are "fast" or "slow" in their movement, as plate movement can vary depending on the specific location and circumstances. However, generally speaking, plates that are moving more quickly may be more likely to experience more frequent earthquakes, while plates that are moving more slowly may experience fewer earthquakes.

Subduction is a process that occurs when two tectonic plates collide, with one plate being either pushed down or overridden by the other. This process can lead to the formation of mountains, volcanoes, and earthquakes. 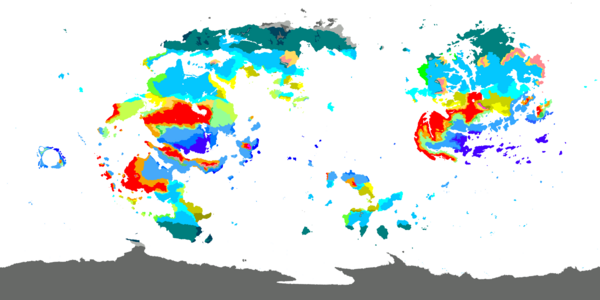 Certain fauna and flora thrive in certain regions due to the local climate, including temperature, precipitation, and humidity. These factors influence which plants and animals thrive and which do not. Understanding this link between climate and plant and animal life helps scientists and conservationists grasp the effects of climate change on ecosystems wurldwide.

Eurth's oceans, seas, and other saltwater bodies host marine habitats, which are home to a range of plant and animal life, including coral reefs, kelp forests, seagrass meadows, and more. These biomes are influenced by temperature, salinity, and nutrient levels, which vary based on location and depth. Coral reefs, for example, are found in shallow, warm waters and are home to coral, fish, and invertebrates. The deep sea is a cold, high-pressure, and low-light environment that supports adapted plant and animal life such as deep-water corals, sponges, and bioluminescent fish. Marine biomes are important for providing habitat and contributing to the global climate system, as well as supporting human activities like fishing, tourism, and pharmaceutical production.

Eurth is the home-wurld of Eumanity, the only known intelligent life in the Euniverse. The earliest eumanoids were the Europithecus afropensis. It appeared about two million years ago and, in several early migrations, it spread throughout southwestern Europa. This region includes such nations as Yuropa, Wajoka, Noble Nykia, Cabarria, and Afropa. It was likely the first euman species to live in a hunter-gatherer society and to control fire. An adaptive and successful species, Europithecus afropensis persisted for more than a million years. They gradually diverged into new species by around 500,000 years ago. Most notable was the Europithecus saharensis, which adapted to live in a savannah-like climate of that time in Abantium.

The history of Eurth has always been at the mercy of its geography. Mountains rise and fall in a cycle of creation and corrosion. Verdant valleys become dry deserts. Rivers flow and flood, or divert and dry up. With time, Eumanity learned to defeat these obstacles. People began to level mountains, terraced slopes with plants, and irrigated the deserts of Amutia or Alharu. Technology allowed the construction of ships to cross the seas, or giant metal birds to climb the skies. But one iceberg can sink the ship, sending a thousand travellers to the bottom of the Adlantic Ocean. And a single hurricane can destroy in one minute a city that took centuries to construct. When rains run too rare, then colossal cities are covered under the sands, as in once-mighty Memopotamia. Or when rain falls too generously, then trees grow to strangle societies, as in Azania. Generations of peoples establish a growing dominance over the Eurth, but their final fate is to become fossils under the fields.

This is a list of countries and dependent territories on Eurth, capital city, population, continent, and government type. The common consensus is that there are 121 countries on Eurth. Except for Antargis, every land area either belongs to or is claimed by one country or another. The list includes sovereign states, inhabited dependent territories and, in some cases, constituent countries of sovereign states. The population figures do not reflect the practice of countries that report significantly different populations of citizens domestically and overall.