Burkini, officially the Republic of Burkini, is a island country located in the North Oriental Ocean on Eurth. Its closest neighbouring countries are the Sunset Sea Islands to the southeast, Niederoestereich to the west and Orioni in the northwest.[1] Cronulla is the capital and largest city; other major towns include Yebahiri and Nech’iēlī. Burkini is approximately 1,077.10 km2 (415.87 sq mi) in size, without the territorial waters. The island is home to 55,786 inhabitants.

Burkini is a unitary parliamentary republic with an executive presidency. The country's head of state is president Aheda Zanetti. The territory that is now Burkini was first settled in the early 200s until Orinese colonization in the 16th century. From the 16th century, it was a colony of Orioni until 1955 when the country gained its independence as a fragile republic. Culturally, Burkini is still considered part of the Orinese diaspora.

The island's wealth comes largely from the service and tourism sectors, with limited contributions from fishing and agriculture. International assistance from Orioni represents a large share of the island's domestic product. Burkini is part of several international and intergovernmental institutions, including the Group of Island Nations.

Female hula dancers depicted by an unknown artist who visited Burkini in the 19th Century.

The earliest known name for Burkini was Purigini (pu·ri·'gi·ni), the combination of 'puri' (clean, pure), 'gi' (not), and 'nin' (lady). In Oharic this means the "(land of) impure women".[2] This is a reference to the traditional topless clothing of the native women. The first explorers to arrive at the island were shocked by this improper display. A similar shocking reference can be found in the capital's name, Cronulla, which comes from the native word Kurranulla meaning "place of the small pink seashell".[3] This 'pink seashell' is a reference to the female genital area. These outrageous exonyms have always been a thorn in the side of native Burkinese.

An alternative discovery myth claims that Burkini was actually named after a now-lost "borgo", a fortress or fortified town, built by post-classical Iberican explorers.[citation needed] The capital city Cronulla is claimed to be a reference to the crenelations of this defensive structure. However, no physical evidence of such a fortification exists to support this claim.[citation needed] Another theory suggests there was originally a small native settlement, which the Ibericans called Coronela as a reference to one of the expedition leaders' local sweethearts.[citation needed]

When in 1529 the explorer Endiriw Ordonato landed on Burkini, he called it the "Isla Amiga". The story goes that when he and his crew arrived at the island, they were met with a warm reception and welcomed on the island with food and celebrations. In his log, Ordonato described his arrival, saying he was welcomed ashore with enthusiastic cheers from an immense crowd of men and women, writing: "Not one of them had so much as a stick in their hands." However, some sources claim that when Ordonato arrived, it was during a native festival on the island, and he was invited along.[citation needed] In Ordonato's mind, this warm welcome with celebrations with plenty of food was put on just for him.

A humpback whale with her calf.

The Burkinese territory is situated in the Oriental Ocean. Burkini sits atop an extinct undersea volcano extending from the ocean floor, created by a volcanic hotspot that underlies the Thalassan Plate. The island was formed as a volcano 2 to 3 million years ago.[4] Because of its eroded height, Burkini is threatened by the possible impact of rising sea levels due to climate change. The total area of Burkini is 1,077.10 square kilometres (415.87 sq mi), with a population density of 55 persons per km². The largest city is Cronulla which is also the country's capital. The highest elevation is Mount Kelayi with a peak height of 694 metres (2,277 ft).

Temperatures in Burkini are stable all year round. Almost half the island is a National Park used for conservation purposes, containing unique species of plants and animals. The nearby UBPSSIF underwater marine sanctuary includes the largest ocean area where whales and sharks are protected. Inside the sanctuary waters, any shark fishing is prohibited. Unfortunately, the actual ability of the small Burkinese coast guard to enforce this ban is very limited.

Burkini lends its name to the legendary 'Burkini Triangle', a treacherous region in the Oriental Ocean where several aeroplanes and ships have disappeared in unexplained circumstances. Most serious scientists reject the claims of any mysterious occurrences along one of the most heavily travelled shipping lanes in the world. The triangular area is bounded by the corners at Niederoestereich, Malindi (fka Tahini) and Burkini.[5]

Depiction of Ordonato being welcomed by natives, from an early 17th Century manuscript.

Not much is understood about the island's ancient history. It is uncertain when Burkini was first settled. Physical remains hint at an early human presence almost two-thousand years ago. The first inhabitants were probably human migrants from Southeast Europa. These journeyed throughout the Oriental Ocean and settled many of its islands. 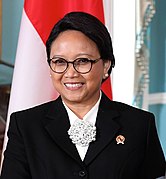 Burkini is a unitary parliamentary republic with an executive presidency. The country's head of state is president Aheda Zanetti.[6] Speaker Miko Laa Laa leads the legislative Assembly of Burkini. Originally colonised by Orioni, Burkini gained its independence in 1955 after the conclusion of the Thalassan War. Previously, the island was administered by the colonial government led by a Vayiresini. A republic was declared, with the first election held in 1956. Laws and regulations were inherited from the Orinese legal system.

Even though officially, the Burkinese have gained their independence from Orioni, there is still an effective military presence of the Orinese navy in the form of a naval base in the large, eastern lagoon.[7] Defence of the island is the responsibility of the Orinese defence forces, primarily supported by a OSRU Detachment in Burkini. It is the smallest operational unit of the Orinese Army. The main role of the detachment is to maintain an Orinese presence in the area, while also enabling the IODF to quickly react to events in the Oriental Ocean and the west coast of Alharu. The country operates a small Burkinese coast guard.[8] The island is strategically important because of its proximity to sea lanes in the Oriental Ocean. Orinese defence councillor Toren Nabérrie has stated the Orinese government views Burkini "as a long-term strategic partner."[citation needed] Military analysts often consider the island as an unsinkable aircraft carrier when it comes to strategical power projection.

Burkini is part of several international and intergovernmental institutions, including the Group of Island Nations.

One of Burkini's pink sand beaches.

Fenijī bombers on Burkini during an EOS exercise.

The island's wealth comes largely from the service and tourism sectors, with limited contributions from fishing and agriculture. The favourable climate allows for two rice crops a year. The ancient inhabitants lived from fishing, collecting shellfish, hunting birds, and gardening. International assistance from Orioni represents a large share of the island's domestic product.

Despite its difficult accessibility, Burkini is visited by many tourists who travel to the island because of its beautiful scenery and pink sand beaches. Famous Alenian explorer Matteo Arlotta said that he regarded it as the most beautiful island on Eurth.[citation needed] Cronulla is generally liked as a place to honeymoon and can frequently be seen promoted in marriage brochures.[citation needed]

Burkini, much like Rohini, has a questionable reputation as offshore financial centre. In recent years, the country has promised to cooperate with EOS regulations and enhance its financial transparency.

There is a single ferry that goes around the island. Several ferry services connect minor coastal settlements to Cronulla, the Burkinese capital.

Cronulla Airport has connections to the international airports in Sunset Sea Islands and Orioni and onward to other countries. The airport is built on the northeast coral atoll, because the terrain of the central cone is too irregular to allow for the construction of a landing strip.

Burkini had a population of 55,786 people in 2015. 34,053 people live in the capital city of Cronulla. Burkinese culture has its roots in Oriental cultural traditions and heritage. The present day population is thought to have resulted from the fusion of several periods of migrations into the Oriental Ocean from both the Oriental and Thalassan directions in remote antiquity. Like most Orinese peoples, the Burkinese don't fit into the major ethnic categories of Europa or Thalassa. In contrast to other Oriental countries, the Burkinese people place relatively great important on their independence and self-sufficiency. Music by the Beach is an annual festival held on 15 October at Cronulla as part of the nation's Independence Day celebrations. The Burkinese dialect is greatly influenced by the Oharic language after the 16th-century colonisation by Orioni.