The Commonwealth of Damak Var is a sovereign nation state within the Meteorolan Archipelago of the South Europan continent on Eurth. It is bordered by Red Iberos and Miiros to the north, Bainbridge Islands to the east, Ayubi to the southwest, and Yien and Norrium to the west. Damak Var has a total population of 15.5 million. The capital and largest city is Avantine. 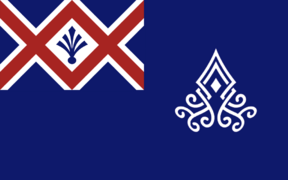 Damak Var is part of the geographical area of south Europa, strongly influenced by Azania, Amutia and the Orient. Damak Var shares no land borders. Damak Var lies along the Equator. The climate has a significant maritime influence. There are two seasons: a wet season and a dry season. There are no extremes of summer or winter. There are a few protected wildlife reserves. When leaving the main cities and passing through the outskirts you will see hundreds of thousands of square kilometers of forest. Evergreen trees dominate the countryside creating a beautiful landscape. The peninsula in the east is the only flat land in Damak Var which serves as its agricultural center. Damak Var's national animal is the Kraken, which teeters on the brink of extinction due to widespread deforestation.

The country is divided into thirteen provinces. Each provinces is named after the largest city which also serve at provincial capitals. Much of the population live in the suburb outskirts and well populated counties outside the city, as well as some large towns and villages in the countryside.[2]

The Grand Council appoints a High Executor to manage day to day affairs and carry out the will of the Grand Council. The High Executor appoints his own Executors to run each government department. Though they have the right to replace him and his cabinet at any moment. The current head of state is Mr Lucas North. Mr Dominic Ustral is the Speaker of the Grand Council of the Thirteen Provinces. There is no government in the normal sense of the word; however, a small group of community-minded, pro-business individuals juggles the competing demands of Commerce, Education, and Public Transport. It meets every day to discuss matters of state in the capital city of Avantine. The country is notable for its keen interest in outer space

Damak Var is a state of corporate opportunists. Varian corporations regularly take interest in armed conflicts around the globe due to their lucrative nature, assessing the need for construction contracting, financing, and any other "reconstruction" needs once the war is over and New Edom needs to rebuild.[3] Crime, especially youth-related, is relatively low. Condemned prisoners spend hours a day sitting in lotus position looking perplexed, cities are engulfed by smog, the nation is ravaged by daily union strikes, and mining is the nation's most dangerous occupation.

Damak Var is a member of the Group of Island Nations (GIN) and an observer of the Entente of Oriental States (EOS).

Damak Var maintains its own currency, the Varian Nitch, controlled by the central bank of Damak Var. The hard-nosed, hard-working, intelligent population billion are either ruled by a sleek, efficient government or a conglomerate of multinational corporations; it's difficult to tell which. Income tax is unheard of. A powerhouse of a private sector is led by the Information Technology, Uranium Mining, and Beef-Based Agriculture industries. (WIP. Energy. Transport. Media. Investment opportunity described in Damak Var, Investment Opportunity (20 September 2012).)

Demak derives its income from trade, exporting rice to neighbouring countries. Avantine is a busy port located along the strait separating Azania and Meteorolas, a major waterway for ships traveling along the coast from Orient to Occident. This strategic location enabled Avantine to become a leading trading center in the Meteorolas.

Varian-Orinese women in the 1970s.

The culture of the islands is a mixture of Azanian (being the largest ethnicity), Orinese (as the former colonial power) and Miirosi (as the source of most tourists). (WIP. Literature. Visual arts. Music. Cuisine. Sport.) Damak Var has an estimated population of 15,500,000. The population are mainly the descendants of Orientals to the west and Azanians to the west. A small portion are also descended from Amutian labourers who came to help develop the recently independent industrial economy in the 1910s. The population is predominantly Salamid. There are also smaller communities with practitioners of traditional religions. The official language of Damak Var is Derrian. Many people speak an Oharic-based creole language as well. According to 2021 estimates, approximately 96% of the adult population are literate.