The Constitution of Orioni (Oharic: Ye’orīyoni Higi) is based on the collection of legal rules based on Statutes of 1709 (Oharic: Higochi) and the Declaration of Citizen Rights as amended in 1922. A lot of times, constitutional monarchies go along with a growing economy, a merchant class, and a shrinking peasant class. Having more skilled workers will lead to a constitutional agreement because a significant class of people are educated and can demand more of a say. The constitutional system draws influences from the Corpus Juris Civilis and Aroman customary law. These are some of the oldest legal texts on Eurth.

The earliest extant texts of Aroman customary law claim to be based on a 7th-century Sahrabic translation Sirr al-Asrar (Sahrabic: كتاب سر الأسرار) of a Suverin translation of the lost Aroman original. The topics in it include questions about how provincial rulers should act, health, justice, and how people should behave. It is one of the most widely studied documents from the Post-Classical Era. The Sahrabic version was eventually translated into Miirosi, Oharic, and even Old Buranic. The 1582 Oharic translation was based on a Miirosi version.

Pertaining to the treatment of citizens:

Pertaining to a monarch's role:

Counsel of the Sea

The Counsel of the Sea (Iverican: Consigli de'l mar) was established in the late Post-Classical period to deal with maritime and commercial law. While these laws were originally created to govern the colonial holdings of Orioni, they later spread throughout much of southern Europa. The Counsel of the Sea was first mentioned in 1285, during a dispute between Orioni and the Sacred Aroman Realm. Orinese merchants were given the right to resolve their commercial disputes on their own, without intervention from the royal courts. In exchange, the monarch received financial support needed for her wars of restoration. 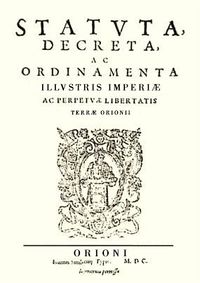 Illustration of the title page.

The current legal system of Orioni started on December 8, 1709. On that day a compendium of Statuti (Oharic: Higochi), written by noted jurisprudence scholar Camila Nobelli (1667-1728), was given binding force by the Empress Ogimachi I. These laws covered the government and justice system of the Orinese empire at that time. It was composed in Aroman and consisted of five books. The title in Aroman is Statuta Decreta ac Ordinamenta Illustris Imperiae ac Perpetuae Libertatis Terrae Orionii.

The new system was an update on the Statuti Comunali (Town Statute), which had been in use in Orioni since about 1023. From this period, existing institutions, such as the Imperial Council, were carried forward. The Statutes are the foundation of all the laws currently in effect in Orioni. It may be one of the oldest constitutions in existence.

There are 26 articles in the first book. It is written in a way that describes the role of the monarch, various councils and courts of Orioni, and the powers that are given to these people. The last two articles explain how the law is to be changed and how the law is to be made known to the public.

The second book, called Jus Civilium, contains 57 articles. The first half of the document deals with civil law procedures, such as how to get a subpoena, what evidence is needed, how to question witnesses, and how much a trial will cost. The second part talks about minors, education, civil service salaries, and wills. The document contains a section that encourages compromise in order to resolve conflict, and another that regulates the salary of lawyers.

The third book is called Jus Criminale and contains 47 articles covering covers criminal law. Prosecution of criminal acts is reserved for the state alone. The laws say that the punishment should be the same size as the crime and describes potential reasons to be lenient. The protection of state assets is given special attention, and efforts are made to regulate weights and measurements.

The fourth book, called De Justitiarum, contains 51 articles. The volume explains how judges are chosen, the different types of sentences, appeals, compensation, and guarantees for appellants. It explains, in particular, that female family heads are liable for the mistakes of their children and any domesti servants.

The fifth book is called Jus Communalis and contains 46 articles on a wide range of topics. The topics covered include sanitation and health, roads, the sale of meat, plant growing, and water reserves. Special attention is given to the maintenance and protection of the fresh water sources.

The trias politica, often used interchangeably with the separation of powers principle, is a model for the government of Orioni. Under this model, the government is made up of different branches with separate powers and responsibilities. This is divided so that the powers of one branch don't conflict with the powers of the other branches. In Orioni, branches are divided into a legislature, an executive, and a judiciary.

To keep one branch from becoming more powerful than the others, protect the "opulent minority" from the majority, and to get the branches to work together, government systems with a separation of powers need a way to balance each branch. Usually, this was done with a system of “checks and balances.” The origin of these, as well as the idea of separation of powers, is usually given to the Lysian Elevation political philosopher Baron de Montesquieu (1689-1755). Checks and balances keep each branch from getting too powerful. For example, the Sibiseba can change the makeup and jurisdiction of the imperial courts.

On 12 July 1874 the Empress Jomi Nabérrie signed a law adopted by the Imperial Council and Sibiseba containing a declaration of citizen rights and the fundamental principles of the juridical order of Orioni. The Declaration starts with a rejection of war. It says that people are in charge of the government, and how the separation of powers doctrine applies to Orioni. Citizens are entitled to certain rights, including equality, inviolability, and freedom. In 1922 the Declaration was amended by Empress Oshita Nabérrie to include universal suffrage.

The Eurth Convention on Human Rights (ECHR) is a treaty that protects human rights and fundamental freedoms on Eurth. Drafted in 1958 by the then newly formed Assembled Nations. The convention went into effect when Empress Owa Nabérrie signed it on 3 September 1958. All members of the Entente of Oriental States are party to the convention, and new members are expected to approve it at the earliest opportunity.