The Reichssenat (Hesurian pronunciation: [ˈʁaɪçsse:na:t], ‘Imperial Senate’) is the federal parliament of the subnational divisions and upper house of the legislature of Mascylla. The Reichsrat is a legislative body that represents the 21 Reichsländer and Freie Städte, consisting of 163 members known as Representatives of the Reichssenat (Repräsentanten des Reichssenats), which are decided through a chosen delegation of the represented state, and or a general election every six years. The composition of the delegation varies from the state's population, political makeup and ruling majority (or coalition) of each state legislature.

Since its foundation in 1789 under the Kingdom of Aldia in Augusthal, it has met in various location, and today sits at the former Elbgau Council building in Königsreh. It is represented by the office of the President of the Reichssenat (Präsident des Reichssenats), currently occupied by Egon Weidmann since 2019, of which its holder is directly voted from the Reichssenat itself. Representatives of the Reichssenat are usually chosen by a state-own delegation, but can be partially subject to popular vote by the state's population as well. The Reichssenat can operate with a minimum number of 160 seats, whith the number of delegation seats per state dependent on its population to achieve proportional representation. An unique occasion where an Election Day can be called earlier than two years after the last election arises when the Prime Minister loses a vote of confidence and asks the President of the Reichssenat to dissolve the parliament in order to allow new state elections afterwards.

During the War of the Five Kings, the Reichssenat was the offical assembly of the sovereigns and elected commoners of the states which were part of the Elbau Confederation (1793–1798). When Mascylla was founded, it became the established, sometimes described, upper house of parliament.

The role of the Reichssenat is described by Article 43 and 44 of the Constitution of Mascylla as follows: "Through the Reichssenat, the states and free cities participate in federal legislation and administration and in matters relating to governmental policy and decisionmaking." The states, represented by their respective governments and legislatures, operate in the Reichssenat and are able to shape and influence the aforementioned fields, while the styles of such participation are not determined and therefore ambiguous.

The National Council (Nationsrat) in 1793 frst proposed the name Länderkammer ('Chamber of States'), in tandem with the also proposed name Volkskammer ('Chamber of the People') for the Reichsrat, but it was later rejected in favor of its current terminology. Today still the Reichssenat is referred to as an "second house" or "Länderkammer" and in some cases as a full fledged upper house of legislature internationally. However, the Reichssenat is described as a sovereign constitutional body according to the constitution and in opposition to most countries "is not a second chamber of a uniform legislative body that would be set equal to the 'first chamber' regarding lawmaking."

The Reichssenat has the valified right of legislative initiative together with the Government of Mascylla and Reichsrat. If the body decides on a law proposal, it will first be forwarded to the government, which is then entitled to comment and suggest changes to it. As a rule, the draft and the opinion regarding it must be submitted to the members of the Reichsrat within six and in certain cases more than nine weeks after the initial proposal. Law proposals of the government are first submitted to the Reichsrat, who also review and state their opinion on it. Here, the deadline of six to nine weeks still applies. The government can also counter a statement of the Reichssenat by a counter remark, before it submits the proposal to the Reichsrat for review.

The involvement of the Reichssenat in the so-called 'second round' differs in terms of whether the law passed by the Reichssenat requires the consent of the Reichsrat in order to be approved. One such law is called the "Zustimmungsgesetz" ('approval-required law'). All other laws can be rejected or called into question by the Reichssenat through a jury of delegates, the Vermittlungsausschuss ("Mediation Committee"). These laws are therefore called "Einspruchsgesetze" ('objection laws').

The necessity of a law to be approved is made apparent by the constitution and names three kinds of laws:

In the case of laws requiring approval, the constitution provides the Reichssenat members with three choices:

In certain exceptional constitutional situations, the Reichssenat has additional tasks, powers and rights that only arise sporadically and have therefore only rarely or not yet been applied.

On the basis of emergency laws, the government has the right to compete with legislation in the event of national defense, including the areas that belong to the sovereignty of the legislative power of the states and free cities and the post-poning of regional elections of the state parliaments. Corresponding laws require the approval of the Reichssenat. The legislative process can be accelerated by jointly deliberating on a draft law by the Reichssenat and Reichsrat.

In the event of an internal emergency, for example in the event of natural disasters or if there is a threat to the existence of a state or the government or their free democratic basic order, thegovernment can deploy armed forces to support the police forces of the state in protecting civilian objects and in fighting organized and militarily armed insurgents. In this case, a country can request police forces from other countries as well as forces and facilities from other administrations and the imperial police. The government can submit the police of one country and the police forces of other countries to their instructions and deploy units of the imperial police if the endangered country is not ready or able to combat the danger itself.

The deployment of armed forces as well as the subordination of the police forces of the states to the authority of the government are to be stopped at any time if the Reichssenat so requests.

Other tasks and responsibilities 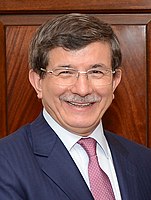 Egon Weidmann
President of the Reichssenat
since 2016

By Article 87 of the Consitution, the President of the Reichssenat assumes the tasks and roles of a Monarch when unable to do so, either by abdication, medical treatment or otherwise. While he or she serves as representative of the Monarch, his office as president remains vacant. For that instance, the vice president temporarily takes over the duties and tasks while the president is unable to do so themself.

Members and distribution of votes to the states

Distribution of votes to the parties 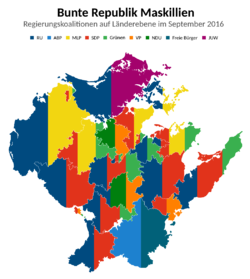 Retrieved from "https://iiwiki.us/mediawiki/index.php?title=Reichssenat&oldid=272962"
Categories:
Hidden category:
This page was last edited on 8 November 2020, at 19:39.
Privacy policy
About IIWiki
Disclaimers