The Mascyllary Air Force (Hesurian: Maskillisches Luftheer, lit. 'air army', Hesurian pronunciation: [ˈlʊftˌveːɐ̯]) is the air force and branch for aerial warfare of the Reichswehr of Mascylla. The commander of the Air Force is Marshal of the Air Force Julius Götzge, and is supervised by the Minister of Defence of the Realm Rüdiger Meißert and Prime Minister Thomas Falkner. As of 2020, the branch had a strength of 23,827 active soldiers and 2,700 reserve personnel, 414 aircraft, operated twelve air bases, and maintained presence at three civil airports. Its size makes it the largest air force within the Erdaran Union. The Mascyllary Air Force was founded in 1919 as part of the military of the Mascyllary Kingdom. There is no organizational and franchise continuity between the current Air Force and its predecessor, which was completely disbanded in 1924.

The Air Force's mission is to support the objectives of the Reichswehr and the Ministry of Defence at large: "to protect the integrity and safety of Mascylla and to promote, sustain, and support peace and security internationally." In comparison to its other branches, it receives more funding and is equiped with more modern technology. Its operational fleet is very varied, but consists largely of fixed-wing aircraft such as fighter and strike aircraft, airbone early warning and control, ISTAR, SIGINT, aerial refueling, and strategic and tactical transport. Though it is specifally for aerial affairs, the other branches of military also maintain air power suited for their maritime, lettoral and land environments respectively.

The Mascyllary Air Force is de facto administered by the Mascyllary Ministry of Defence and thus its executive minister, but retains a ceremonial position under the sitting Monarch as the country's commander-in-chief of all of its armed forces which is in turn exercised by the Prime Minister as head of government. The most senior air force officer is the Marshal of the Air Forces (Marschall der Luftstreitkräfte, MLS) who, though ceremonial in essence and not part of the chain of command in peacetime, reports directly to the Minister of Defence, the Monarch and Prime Minister. The Colonel of the Regiment of the Air Force (Oberst des Luftheerenregiments, OLR) is the main administrative and command position within the Air Force, and is a member of and supported by the Air Force Supreme Command (Oberkommando des Luftheeres). 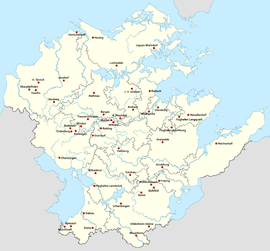 Map of the air bases of the Mascyllary Air Force

Retrieved from "https://iiwiki.us/mediawiki/index.php?title=Mascyllary_Air_Force&oldid=361895"
Categories:
Hidden category:
This page was last edited on 19 June 2021, at 19:12.
Privacy policy
About IIWiki
Disclaimers