Verlois was chosen as the host city for the games during the 2022-2030 Invictus Committee deliberations. It faced competition from fellow Euclean cities Rimso in Scovern, Morwall in Estmere, and Alikianos in Piraea. The Games were a centenary celebration for Verlois, which also hosted them in 1922. They were the third Summer Invictus Games hosted in Gaullica, the second Games hosted in Verlois, and the fourth Games hosted by Gaullica in total.

The games concluded with hosts Gaullica winning the games with 100 total medals and 196 total points, Soravia in second with 144 points and Shangea in third with 117 points. 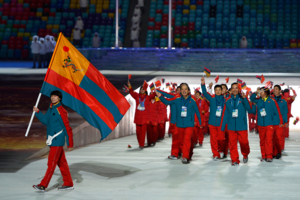 The Shangean team marches in the Parade of Nations 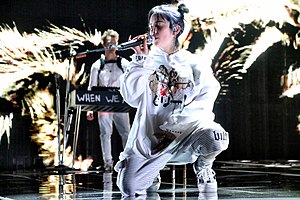 The opening ceremony took place at the Parc de la Terre d'Or in central Verlois beginning at 21:00 local time on 11 July. The ceremony opened with a performance of the Gaullican national anthem, the Chant des Gaullois, by the Verlois Symphony Orchestra as the Gaullican flag was raised. This was followed by musical performances by pop stars Violaine Rousseau and Georges Dior along with a light display and dance performance by Cirque du Clair de Lune. A segment highlighting the 1922 Games included a somber tribute to the sacrifice of prior generations and hopes for future peace.

The ceremony's second act consisted of the Parade of Nations, with Etruria taking its traditional first place as the originator of the modern Invictus Games. Other nations followed in alphabetical order with the host nation, Gaullica, concluding the parade. The Gaullicans were led by flagbearer Thècle Deslys, who had previously won Invictus gold in the long jump.

IIC President Prospero D'Agosta made brief remarks before the President of Gaullica, Monique Degar-Abdulrashid, formally declared the Games open. The Invictus flag was brought into the stadium and raised as the Invictus Hymn was played.

The Invictus Cauldron lighting concluded the ceremony. The last stage of the Invictus Torch relay repeated the route from the 1922 Verlois games; rather than highlight an individual athletes, organizers chose to feature the entire torch relay team to celebrate the inclusive spirit of the Games. Étienne Barre, a two-time gold medalist in the modern pentathlon, lit the cauldron. As a final gesture of peace before the ceremony concluded, a flock of white doves was released above the crowd.

28 sports were played at the games, comprised from 36 disciplines, and with 301 individual medal events. Esports (represented by a single Avatar tournament) was played for the first time as an Invictus medal sport at these games.

In the list below, the number of events in each discipline is noted in parentheses. 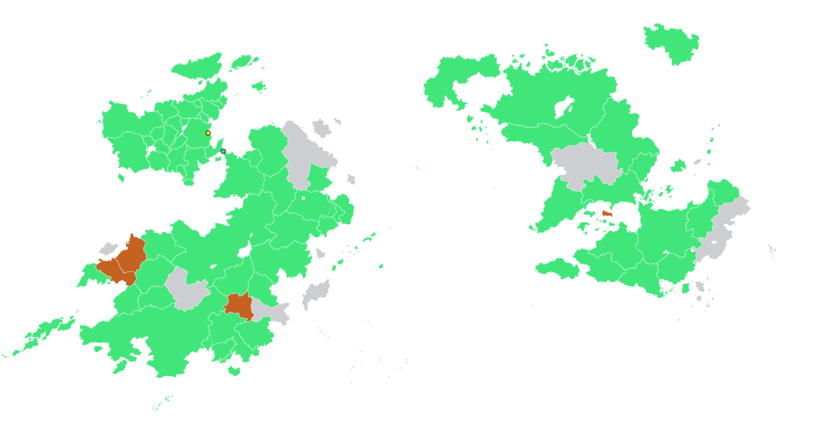 The closing ceremony took place on 1 August beginning at 21:00 local time at the Parc de la Terre d'Or in central Verlois. The closing ceremony, like the opening ceremony, began with a performance of the Gaullican national anthem by the Verlois Symphony Orchestra. President Monique Degar-Abdulrashid made brief remarks congratulating the athletes before International Invictus Committee President Prospero D'Agosta also made a short speech.

The Triumph of Nations Parade followed, with the flagbearers for each country entering the Parc in the order they ranked on the medal table. Gaullica, with 100 medals and 196 points, headed the parade with men's individual épée gold medalist Gustave Kateb carrying the flag. After the flagbearers, all other athletes entered the Parc together, symbolizing the fact that sport crosses national borders and unites all people. The parade concluded with a short video presentation thanking the athletes and fans for their participation.

The Victory Celebrations followed; these consisted of the medal ceremonies for a selection of sports that are most emblematic of the history and traditions of the Invictus Games. Medal ceremonies were held for the marathon, triathlon, pentathlon, decathlon, and heptathlon.

The next segment represented passing the responsibility and honor of hosting the Invictus Games to representatives of the city of Sindae, Ansan, which will host the next Summer games in 2026. The Ansene anthem and Invictus Hymn were played in succession before the Invictus flag was lowered and given to the mayor of Sindae, Park Jae-In, by eight Gaullican gold medalists. Park gave a brief speech before a short video presentation highlighting the preparations that Sindae will make to host the games.

Finally, the Invictus Flame was extinguished, officially concluding the games.

Aerial view of the Parc des Expositions de Verlois, the venue for the Invictus Broadcast Centre.

As with previous Games, the Invictus Broadcasting System (SID; Gaullican: Système invictus de diffusion) will serve as the host broadcaster for the 2022 Games. The SID cooperated with the Gaullican public broadcaster, Gaullice Télévisions, to provide broadcasting facilities, personnel and technology for coverage of the Games. The SID licensed broadcasting rights to broadcasters across the world, providing the base feed of video, audio and standardised graphics, with each local broadcaster able to supplement this with their own commentary, presentation and editing.

More than 30,000 hours of television coverage will be produced and distributed by the SID, with a similar volume of digital content produced for online and multimedia services. The SID has set a minimum quota of 50% of televised coverage to be produced in 4K UHD resolution, similar to its production of coverage for the 2020 Winter Invictus Games. In addition, the SID and Gaullice Télévisions will film the Opening and Closing Ceremonies, as well as a select number of event finals, in 8K HDR resolution.

The Parc des Expositions de Verlois is the venue for the Invictus Broadcasting Centre (CDI). The SID operates all production and broadcasting feed dissemination from the Centre. The CDI also serves at the hub for broadcasters producing content relating to the Games, including journalists from non-rightsholding broadcasters and organisations.

In Hennehouwe, public broadcaster Hennish National Broadcasting (HNO) is the official broadcaster of the Games. HNO will air approximately 36 hours of live, free-to-air content a day across its television and digital networks within Hennehouwe. Primary television coverage will be broadcast on De Tweede, including live primetime events, coverage of events with Hennish participation, daily highlights and studio commentary. Uninterrupted coverage of sports will air on the broadcaster's dedicated sports channel HNO Sport, pop-up channel HNO Sport Extra, and streaming service HNO NU. HNO also launched its first ever 4K channel, HNO UHD, on a temporary basis solely for coverage of the Games. For the first time ever, HNO will sublicense coverage of the Games to a third-party Hennish broadcaster, with full coverage of the esports event being sublicensed to youth-orientated network ONYX.

On 13 July, the second day of the Games, Girolamo Conte, the head coach of Etruria’s female boxing team, was overheard and recorded making homophobic and racist comments about Sarena Sutton, Estmere’s silver winner in women's lightweight boxing. He reportedly questioned why the boxer was representing Estmere and not the men’s refugee team, citing her sexual orientation and ethnicity.[2] He was also overhead and witnessed berating the three Etrurian athletes for failing to progress beyond the Group of 16 stage, publicly questioning their talent, mental capacities and patriotism.

Conte was reported to the Invictus authorities who promptly reviewed the footage of him insulting Sutton and heard evidence from the three Etrurian athletes who reported him for his behaviour. The International Invictus Committee informed the Etrurian Invictus Committee that it would issue fines and bans against it if Conte was not removed from the Games.[3]

Late that night, the EIC announced Conte had been sacked as head coach, expelled from the body, and was ordered to leave Verlois immediately. The Etrurian body also referred his behaviour to the Etrurian boxing authority, who expelled and banned him for life on July 18. The EIC apologised to Sutton and the three athletes, and sent an internal memo to all Etrurian teams with a stern warning that the body would not tolerate any further racial or homophobic incidents.[4]

The Conte incident sparked a bitter debate in Etruria over whether the EIC overreacted.

On 14 July, the third day of the Games, Lubor Rušil, a sports commentator for Bistravská Televize, made racist remarks during his commentary of a sabre fencing match between Irina Stetenko of Bistravia and Elisé Yaoua of Garambura.[5] After the incident, many individuals and private media outlets reported Rušil and called the broadcaster to suspend him from commenting for the duration of the Games. It is estimated that around 800,000 viewers watched the event live on the channel.

The next day, rugby and artistic gymnastics events were commented on by Anna Bakarová, who had previously worked with Lubor Rušil on days 2 and 3. However, swimming events had no live commentary and were only briefly summarized in the special program Invictus Studio. During the program it was announced that B.TV2 employees Martin Houský and Jerohim Kusač would join Rušil and Bakarová in the upcoming events. No statement has been released by the broadcaster or by Rušil himself. It is currently unknown what measures have been taken by Bistravian television against the reporter. The journalist has been working for B.TV since 2003 and faced similar criticism during the 2018 Summer Invictus Games and 2019 IFF Coupe du monde.

The same day, Irina Stetenko issued an apology on Chirpr which also included criticism of Rušil, mentioning his history of objectionable behavior.[6]

After Invictus Athletes from Champania fencer Lûcia Montverd earned a gold medal in the women's individual sabre event, it was reported on 16 July, just two days after the event, that she had tested positive for elevated levels of the banned substance trimetazadine.[7] As of 18 July, neither the fencer nor the International Invictus Committee has confirmed or denied the positive test result or the validity of the articles published by sports journal L'Équipe or newspaper Le Monde. Trimetazadine is used to treat numerous heart conditions and was added to the list of banned substances by the Global Anti-Doping Agency in 2013. In healthy people, the drug increases blood flow and endurance levels, giving athletes and unfair advantage over those not on the drug. The Champanian Invictus Committee is currently banned from participating in the Invictus Games after it was found that Champania engaged in state-sponsored systematic doping since at least the early 2010s.

On 19 July, the International Invictus Committee confirmed the positive results for Montverd, and announced that it would be stripping the fencer of her gold medal [8], effective immediately. The IIC also said that no other actions would be taken against the other Champanian fencers due to poor performance. The disqualification and stripping saw Gaullica and Garambura claim gold and silver respectively, and previously 4th place Bistravia earn the bronze. In the wake of the news, the Scovernois Invictus Committee and Hennish Basketball Association were reported to both be lobbying the Court of Arbitration for Sport (TAS) for the complete ban of Champanian athletes from international competition. [9][10]

Initially, Montverd was given a 3-year suspension for the positive results. This was then successfully appealed and reduced to 2 years. The Global Anti-Doping Agency confirmed it was launching an investigation into the matter. On 6 March 2023, the investigation was concluded, and on 9 March it was released. In the report, it was found that Montverd did not knowingly ingest the drug, and upon further analysis, multivitamins that athlete was taking was found to be the source. The TAS commuted Montverd's ban to one-year from the date of the positive test result, and is set to expire on 16 July, 2023.