The cinema of Gylias comprises films made in Gylias or by Gylians. Gylian cinema has a long and rich history, and has been profoundly influenced by political and social conditions. Gylias has a strongly-developed film industry that benefits from significant government support, and has attained international recognition during the Gylian Invasion.

Gylian cinema began in Alscia. The first film production and distribution companies were set up in 1908–1911, and the first film studio was established in 1910.

The film industry experienced a first boom in the 1910s–1930s, resulting from Alscia's widespread prosperity and rapid development. As a province of the Cacertian Empire, the Alscian film industry was strongly influenced by Cacerta's at first, with Megelan, Kirisaki and Akashi serving as additional significant influences.

The silent film era lasted until the late 1920s. Common subjects of Alscian film included light entertainment, dramas that spoke to Alscian identity of "lucky Gylians", and war films that dramatised Gylian resistance to Xevden, with a focus on the Glorious Rebellion.

Olivia Dafi and the Gish sisters (Lilian and Dorothy) were the first iconic film stars of Gylian cinema, and are recognised as significant contributors to the development of film acting. Olivia was known for musical comedies and portraying brash feminist tomboy characters, reflecting the progressivism of the "hurried province", as well as its androgyny chic. Lilian and Dorothy worked in a variety of genres, and achieved fame for portrayals of resolute sisters living by their wits amid the corruption and injustice of Xevden.

The freedom of the province within the Cacertian Empire spurred experimentation and the development of new genres. Pornographic cinema developed considerably. The first animation was produced and exhibited in 1918. Megelanese influence brought an early infusion of futurism, which influenced the Gylian avant-garde even after its reputation suffered due to the Futurist regime, and the telefoni bianchi genre, which became one of the most influential Megelanese contributions to Gylian cinema.

The Liberation War had a massive impact on Gylian cinema. Film production came to be concentrated in the Free Territories, and ground to a halt in other territories due to the ravages of war.

Cinema benefited from the social revolution and prefigurativism of the Free Territories, which produced a flourishing popular culture. However, it also bore the brunt of the rationing and tough economic circumstances. Guerrilla filmmaking and non-professional actors became mainstays of film production. 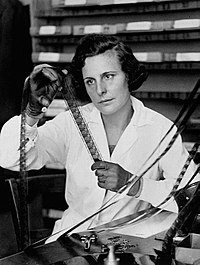 The anarchism of the Free Territories permeated the film industry. The potential of cinema as an art form and a political tool was recognised. Amalia Blumenthal was an important filmmaker of the period, whose expansive aesthetics and innovative techniques were used in the service of anarchist propaganda. She is credited with helping synthesise and disseminate elements from avant-garde filmmakers such as Sergei Eisenstein and Dziga Vertov into a distinctive style.

Similarly influential was Maija Džeriņa, whose experimental black-and-white shorts were groundbreaking in their fusion of surrealist imagery, choreography, and avant-garde editing and camera techniques.

Radicalism and experimentation resulted in the production of numerous documentary films and war films. Romantic, comedy, and pornographic films also became popular as a means to entertain audiences. A famous star of the period was Reda Kazan, who leveraged her sensual persona and bawdy humour into a series of musical comedies, including her celebrated collaborations with Ellen Powell, tailored especially for their dance talents.

The Free Territories were the golden age of Gylian radio, and while some performers such as Niní Marshall were able to sustain film careers, many found that their styles were too verbally-based to successfully translate to the screen.

The length of the Liberation War had a paradoxical effect: it largely isolated the Free Territories, allowing their culture to develop differently than the rest of Tyran, but allowed controlled exposure to foreign imports, mainly through the international battalions of the People's Army. Market isolation and prefigurative politics greatly incentivised the emergence of distinctive takes on existing genres, informed by the radical milieu and ubiquituous experimentation.

As a result, when the war ended and foreign imports could resume, Gylian audiences' tastes had diverged significantly within the region, giving domestic films a stranglehold on the domestic market.

The film industry thrived after the end of the war. During the transition from the Free Territories to Gylias, massive public works for reconstruction gave special emphasis to building cutural and artistic centres. Cinema attendance greatly increased. Gylian film was best positioned to cater to the new audiences' tastes, and enjoyed significant government support.

The booming economy and Golden Revolution influenced tastes and trends. The end of rationing freed films to achieve high production values and use more elaborate sets, while the notion of "applied avant-garde" became popular, steering filmmakers towards an ideal of fusing experimentalism with accessibility.

The influence of Megelanese neorealism and nouvelle vague was absorbed into aesthetic experimentation, which reached new heights during the "psychedelic revolution" of 1966–1968. The era of psychedelia brought greater innovation and surrealism to Gylian cinema, influencing both art films and those for mass audiences. Among the best-remembered films of the era were The Beaties' Magical Mystery Tour (1967), The Monkees' less-successful Head (1968), and the faithful animated adaptation of Alice in Wonderland (1968).

During the Groovy Gylias era, the most successful film stars were Rauna Næsve, Brigitte Nyman, and Alike Demetriou, whose output is considered a pinnacle of Gylian light comedy. Rauna was recognised as a sex symbol for her ebulliently sensual screen presence and comedic talent, exerting a major influence on Gylian depictions of sexuality. Brigitte and Alike played good-natured girls with mischievous sides, presenting an idyllic and subtly utopian socialist worldview that reflected the Golden Revolution. They embodied a Gylian version of the actor-musician ideal, displaying their singing and dancing skills in musical numbers and recording albums as well.

The collaborative works of Carla Miló and Vittorio Marchi provided a distinctive — and proudly Italian — comedic voice during this period, turning a parody of male chauvinism into a profound exploration of gender roles, bridging the gap between orgone films and neorealism and nouvelle vague.

Animation came into its own during the era, gaining a permanent advantage from the creation of the Gylian National Film Institute's animation studio, which produced or assisted nearly every Gylian animated film. Close ties with Kirisaki were a great influence on the animation industry, standardising Miranian-influenced aesthetics that led to the nickname "Gylianime". Alice in Wonderland was the first animated film to gain significant success, and the industry came to operate equally for cinema and television.

Art film gained a well-established role in the film industry. Documentaries, cinematic radicalism, and artistic experimentation thrived among niche audiences, while the principle of "applied avant-garde" allowed their innovations to be adapted and assimilated by works aimed at general audiences. The experimental films of Annemarie Beaulieu, Meiko Kaji's highly stylised honourable-outlaw tales, and Silvana Perriello's career-long exploration of how to infuse seemingly unpleasant loudmouths with playful humour and sex appeal won cult followings.

The innovative and exploratory ethos that came to dominate Gylian filmmaking found an influence abroad during the Gylian Invasion. However, in many cases the gulf between Gylian and foreign audiences proved to large: more experimental or niche Gylian films won cult followings at best.

The 1970s–1980s were a period of transition for the Gylian film industry, as existing trends were consolidated and new influences emerged.

During the wretched decade, there was a growth in films that frankly reflected the crises that beset Gylias under the Aén Ďanez government, or exploring post-revolutionary political stagnation.

Home video spread in popularity during the 1980s, creating a new direct-to-video industry. Much like their Miranian counterparts, Gylian animation seized upon the new distribution format, and original video animation became a mainstay of Gylianime.

The renewed national optimism and confidence of the 1990s marked a rejuvenation of Gylian cinema, and brought new developments. The Chikageki double act played a trailblazing role in popularising action and adventure comedies; their self-parodic and fanciful approach made them one of the most successful stars of the decade.

Chikageki's approach would be refined by Saira Telyn and Dreamwave Productions, who gained recognition for their blockbusters based on polished production values, high-quality scripts, fast pacing, and elaborate stunts and special effects. Dreamwave have established themselves as the leading producer of Gylian blockbusters and media franchises, and their works have achieved wide international recognition.

The spread of the internet in Gylias and creation of the publinet has played a sizeable role in the success of the contemporary film industry, and in increasing Gylian cinema's success abroad through a renewed Gylian Invasion.

Gylian cinema has been shaped by the distinctive economic practices common throughout popular culture, as well as the changes to economy, society, and popular tastes engendered by the Golden Revolution. The film and television industries benefit from significant government support through cultural policies, and high levels of cultural protectionism.

The Gylian film industry is characterised by a collaborative approach to filmmaking and a recognition of each person's contribution to the creative process. Derived from the existing management culture of Gylian companies, the result is a more collective focus, in opposition to the auteur theory's privileging of single artists.

The Gylian star system has also evolved differently, influenced by the economic practices, vibrant media, and absence of a scandal press. Popular stars create a distinctive image that sustains interest through periods out of the public eye, and promotional periods are both stringently regulated and highly reduced, preventing overhype and backlash. Typecasting is common and accepted, with many actors becoming identified with a specific character type and embracing it.

Gylias' vibrant and diverse cinema and the low exchange rate of the þaler have encouraged the growth of international co-productions and the use of Gylian locations for filming.

Retrieved from "https://iiwiki.us/mediawiki/index.php?title=Cinema_of_Gylias&oldid=315615"
Category:
Hidden category:
This page was last edited on 22 February 2021, at 19:17.
Privacy policy
About IIWiki
Disclaimers