The judiciary of Gylias is the system of courts that applies and interprets the law of Gylias. It is an independent component of governance, observing the principle of separation of powers. It is organised as a hierarchical system of courts, with the Court of Cassation of Gylias and Constitutional Court of Gylias at the apex.

Management and operation of the courts is done by National Courts Administration. It has a purely administrative role.

The Gylian Legal Association (French: Association Légale Gylienne) is the professional organisation responsible for regulating the legal profession. It advises the President of Gylias on appointing and dismissing judges.

Gylias uses a nonadversarial system for legal proceedings. Judges conduct trials, with the prosecution and defense assisting in investigating and establishing the facts of the case, and determine the final verdict.

Since the Gylian legal system is heavily codified, the typical verdict or judicial situation is concise, clear, and contains straightforward explanations.

Court proceedings are oral and public, with exceptions stipulated by law in sensitive cases.

The key positions in court proceedings are judges (juges) and advocates (avocats), the equivalent of lawyers. Since the majority of cases in the legal system are not brought to trial, notaries (notaires) and judicial assistants (assistants d'justice) have a significant role among legal professions. There are more notaries and judicial assistants in the legal system than judges and advocates.

Juries are completely absent from the legal system.

Judges are nominated by the Gylian Legal Association and appointed by the President. The qualifications for being a judge include completion of a Master of Laws degree, several years' experience in the legal profession, and a reputation for integrity.

Judges are appointed for life; revocations are only done in case of professional misconduct or other crimes. The Constitution prevents judges from holding any other positions simultaneously apart from academic ones.

Judges are assisted during trial proceedings by assistant judges, who are selected from legal students and graduates beginning their legal careers.

Advocates are legal practitioners who provide legal representation in courts. They are graduates of law schools who have practiced law for at least 5 years and are admitted to the Gylian Legal Association. They may work as prosecutors (procureurs) or defenders (défenseuses).

Public procurators (procureures publiques) are legal professionals working in the public sector who carry out pre-trial investigations into criminal allegations and make recommendations for prosecution.

Judicial assistants are the legal equivalent of law clerks. They assist judges in writing verdicts (together with assistant judges) and conducting legal inquiries and research. 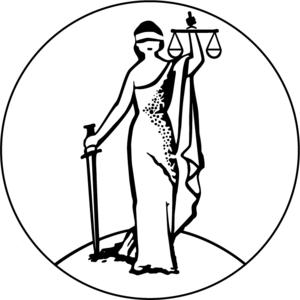 The standard Gylian judicial seal depicts Lady Justice blindfolded and holding scales and a sword. It is used as the standard symbol of courts.

The Constitution prohibits the creation of extraordinary or special courts in Article 35. As a result, courts specialised in a particular area of law, such as tax law or labour law, are legally defined as divisions of general courts.

The court system has three tiers: local, regional, and federal, conforming to the federal structure of governance prescribed by the Constitution.

While theoretically each municipality has its own municipal court, the increase in number of municipalities since independence has led to mergers and consolidations of courts to increase legal efficiency. Currently, there are 758 municipal courts.

Federal courts include 10 appellate courts (cours d'appel or tribunaux d'seconde instance), which hear appeals in cases first heard in municipal or regional courts. Above the appellate courts are the two supreme courts: the Court of Cassation of Gylias and the Constitutional Court of Gylias.

Court of Cassation of Gylias

The Court of Cassation of Gylias (Cour d'Cassation d'Gylias) is the final instance in all civil and criminal cases. It consists of 9 members appointed for a single 9-year term by the President.

The Constitutional Court of Gylias (Cour Constitutionale d'Gylias) is the final instance in administrative and constitutional cases, and scrutinises legislative proposals to ensure compliance with the Constitution. It consists of 9 members appointed for a single 9-year term by the President.

Retrieved from "https://iiwiki.us/mediawiki/index.php?title=Judiciary_of_Gylias&oldid=75536"
Category:
This page was last edited on 4 June 2019, at 10:06.
Privacy policy
About IIWiki
Disclaimers