The Hermes Programme (Hellene reformed: Πʀογʀαμμα Εʀμές, Programma Ermés) is a distributed decision support system used by several Tyranian states to aid the management of their economies. It was first implemented in Gylias beginning in 1962, with Theophania Argyris as its principal architect, and was subsequently adopted by the rest of the Common Sphere.

When it began in Gylias, the project was officially known as the Cyber Network of Coordination and Information (Hellene reformed: Ψεφιακό Δίκτυο Πλεʀοφοʀιόɴ και Συɴτοɴιςμού, Psefiakó Díktyo Pleroforión kai Syntonismoú). Theophania Argyris nicknamed it the "Hermes Programme" for short, after the Hellene god of trade, travel, and thieves, and the nickname quickly superseded the official one.

Hermes' attribute as a god of thieves was appreciated by the Gylian public for adding an impish quality to the name, in line with the cultural wicked–evil distinction.

Theophania Argyris was a self-taught computer scientist and protégé of Aliska Géza. Her research during the National Obligation period led her to propose harnessing cybernetics to improve decentralised planning and self-management of the Gylian economy. She planned a national information network to allow real-time collection and dissemination of data, which would improve coordination among cooperatives and allow federal and local governments to adjust policies to ensure equal development and respond to crises.

The Hermes Programme began implementation in 1962, with 500 telex machines donated by Kirisaki installed in various enterprises. These machines were connected to a custom-built mainframe computer in Mişeyáke, which used Theophania's software to process daily economic reports and turn them into easily-understood variables.

The implementation schedule was very aggressive: roll-out and testing took place simultaneously, and the system achieved an advanced prototype stage within a year. It proved successful in improving management and coordination of Gylias' market socialist economy, and was expanded to cover all aspects of the economy by 1966.

Theophania shared her work with the rest of the Common Sphere. As the CS member states pursued broadly leftist economic policies, Hermes' success in Gylias attracted notice. The CS states began also adopting the Hermes Programme, substituting simpler coding for Theophania's unorthodox techniques. In general, these did not use it as comprehensively as Gylias, and some such as Phonox limited it to information-gathering rather than active economic planning.

Delkora made considerable use of the Hermes Programme throughout the late 1960s and early 1970s during implementation of the New Kingdom program, in particular relying on it to help manage the country's large public sector. Its successful implementation helped contribute to the economic boom of that period.

The spread of the Hermes Programme throughout the CS brought significant benefits to trade, and deepened economic ties between its members. Gina Campanelli, the long-serving Chair of the Economic Commission, was a strong supporter of Hermes' use to improve mutual coordination of economic policies and trade. Hermes' use played a part in the success of the Common Monetary System, by increasing integration of economic and monetary policies.

During the 1980s, Gylias experienced a certain divergence between its Hermes Programme, which remained heavily reliant on Theophania's original code, and the rest of the CS. The loss of Theophania, deterioration of public services, and economic recession all added to the wretched decade. The discrepancy began to be resolved by the Filomena Pinheiro government, when Theophania returned to her old ministry and rewrote and simplified the code, using technical assistance from the rest of the CS.

Meanwhile, the governments of Lars af Vellarand and Ulrik Andersen in Delkora sought to restrict use of the Hermes Programme as part of their effort to reverse the New Kingdom reforms. This resulted in slowed economic growth throughout the 1980s until the Programme was restored to widespread use under Emma Jørgensen.

Megelan's participation was affected by the economic crash of 1987 and subsequent "lost decade", returning to normal in the economic revitalisation of the late 1990s.

The 1990s were marked by consolidation and upgrades for Hermes, taking advantage of the growth of information technology and the internet. Gylias led the way in these developments, implementing the Cybervote system to increase public involvement in planning.

The Hermes Programme is based on a network of computers, each of which collects data from its location and transfers it to a central computer. The central computer processes the information using Cyberstride software — composed of statistical programs, Bayesian filtering and Bayesian control. Daily variations are identified and the significant data requiring decision is presented to operators.

Using the viable system model, Hermes provides four levels of control with algedonic feedback: firm, branch, sector, and total. If a problem is identified and one level of control does not remedy it within a certain interval, the higher level is notified. Results are discussed in the operations room and plans are made at various levels. 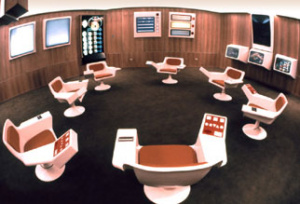 The operations room is the crucial element, and the futuristic aesthetics and designs implemented in Gylias have gained iconic status. The operations room is furnished with seven tulip chairs (which Theophania considered the optimal number for creativity), which control several large screens that project data. Information is presented in iconic form, without figures:

Displays are controlled using large buttons on the chairs, and can highlight different features. Decisions can be tested using computer simulations which show the effects of taking a certain course of action.

Through use of the viable system model, the Hermes Programme gives each unit the freedom to act locally without endangering the viability of the social organism. 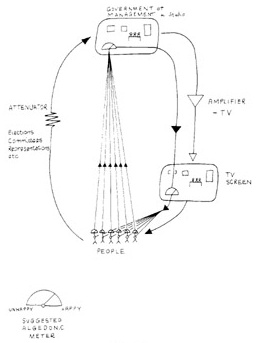 Several countries have used the top level of Hermes to develop applications that model the economy as a whole and simulate future performance, enabling economic forecasting that aids medium- and long-term decisions.

The Cybervote system, first proposed by Theophania in the 1970s, has been successfully implemented in Gylias, taking advantage of the widespread adoption of computers and the Internet. Cybervote is a key component of decentralised planning: it enables direct democratic participation in planning directly through Hermes, complementing the involvement of communal assemblies outside of it.

Implementation and use of the Hermes Programme varies among countries. Gylias has the most comprehensive implementation, being used throughout the entire economy, followed by Megelan, while Phonox makes the least use of it. Other countries use it primarily for the public sector or state-owned enterprises, as in the case of Delkora, to carry out more precise indicative planning, to monitor trade, or simply for information-gathering.

The Hermes Programme has had a tremendous impact on the Gylian economy, by allowing real-time access to information and participatory planning. Its mass acceptance and everyday use are credited with sustaining Gylias' high rate of civic and social engagement, and have left a significant mark on Gylian popular culture, particularly in the science fiction genre.

The CS members have also experienced significant benefits from implementation of the Hermes Programme, and it is considered to have strengthened the bloc's leaning towards left-wing economic policies and trade cooperation.

Hermes is celebrated among Tyranian techno-progressives and has frequently been cited as an inspiration for models of democratic planning by socialists, communists, anarchists, and other anti-capitalists.

Retrieved from "https://iiwiki.us/mediawiki/index.php?title=Hermes_Programme&oldid=214924"
Categories:
Hidden categories:
This page was last edited on 2 June 2020, at 18:59.
Privacy policy
About IIWiki
Disclaimers