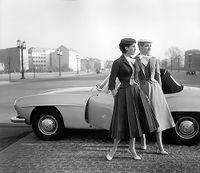 Two georgettes next to their car in Mişeyáke, 1965

Georgette (Gylic transcription: Jorjet) is a term used in Gylias to refer to members of a largely middle class silent majority group with distinctive lifestyle traits, as well as a subculture that displays said traits more conspicuously.

Georgettes emerged from the Golden Revolution and economic boom experienced by Gylias in the 1960s. They are associated with affluent lifestyles and passive progressivism, comparable to bourgeois bohemians, famously described by writer Esua Nadel as "a beloved creature endemic to Gylias and existing nowhere else".

In Gylias, the term is used with multiple meanings: it can refer to the georgette subculture, the post-revolutionary middle class as a whole, or as a generic reference to ordinary Gylians. Georgettes have been frequently depicted in Gylian pop culture, particularly in pairings with more adventurous or unconventional characters.

The term comes from the 1964 film Georgette, depicting scenes from the life of a woman with a bourgeois lifestyle and broadly conformist personality. The film's ambiguous viewpoint made it very successful, and the subject of debates that sustained public interest in it. The title came to be used as a synecdoche to refer to similarly apolitical persons who were not directly involved in the Golden Revolution.

Although the term comes from a female character, it is used in a gender-neutral fashion.

The term gained multiple meanings since its spread, and has been noted for its flexibility and playful ambiguity. Anthropologist Rueda Lasfæ identifies four "significant overlapping definitions" of georgettes:

The term was first used in The Nyretak Times in March 1965, in an article which referred to "georgette-like voters". The term came into widespread use in the 1960s, being shortened to "georgette", and accumulated its commonly accepted definitions. The georgette subculture also emerged during this period.

Significant references to the concept include Ŋéida Vaşad's studies of georgette voting patterns, and Melina Koumantaros' 1973 book New Comfortable Gylians, an influential sociological study of the phenomenon. Melina identified the subculture's tongue-in-cheek consumerism as a result of widespread economic prosperity, and a facet of the ideal of socialised luxury. 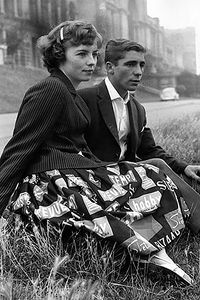 Georgettes are often defined as largely apolitical counterparts to the radical forces that drove the Golden Revolution. Not actively involved in transformation to the same extent as its vanguard, georgettes are calmly accepting of the status quo.

Their use of newfound prosperity to indulge in popular culture and consumption that previous generations had been excluded from represents a less active manifestation of the revolutionary impulse.

The georgette persona is built on a contradiction: outwardly imitating the conformist and unimaginative qualities of the petite bourgeoisie while embracing modernity. The passive absorption of the innovations and experiments of Gylian culture and society serves to infuse the stereotype with colourful and lively qualities — much as Denise Sarrault did with the archetype of the housewife.

The georgette identity has been described as "supportive but playfully ribbing" the Golden Revolution, by using their freedom to jokingly present themselves as apathetic and sedate consumers.

Notable influences on the georgette identity include the sartorial styles of Ðaina Levysti, Rin Tōsaka, and Aliska Géza, and Esua Nadel's persona as a sharp-dressed, wisecracking observer and satirist. The exaggerated, ostentatious presentation of the subculture has been compared to performance art.

Georgettes' appearance is broadly in line with Levystile trends, and heavily emphasises customisation. Common elements include clothes with buttons, full silhouettes, eccentric touches, colourful hats, and jewelry and other accessories. The subculture is famous for its humorous preoccupation with clothes and appearance. 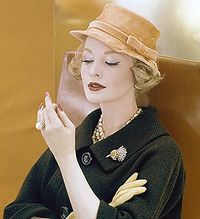 Georgettes lack overt class-based identities and traits, but in practice represent the middle class of Gylians. They are typically highly-educated, hold professional qualifications, and live in cities.

Non-salaried workers tend to be self-employed, independent professionals, or involved in small business. A notable proportion of self-employed georgettes are hétaïres and merchants.

Georgettes primarily live in public housing and housing cooperatives, and decorate their residences in a "space age bachelor pad" style.

Many georgettes drive cars, and car ownership is something of a point of pride. The appeal of cars comes from their association with middle class lifestyles, and the high taxes and public policies that discourage car ownership in favour of public transportation, unexpectedly making cars an attractive luxury good. The SV-1 achieved its iconic status in the Golden Revolution in part due to its popularity among georgettes.

They also use public transport, own a bike or scooter, or small pleasure boats if they live by the sea. Much like clothing, georgettes customise their cars and bikes, and have a utilitarian mentality, carpooling and helping friends with transportation.

Georgettes are generally associated with drinking wine, particularly champagne, largely because of the beverage's "classy" reputation.

Georgettes are known as active and discerning consumers with eclectic tastes. They are strongly represented among the audience of Neo-Gylian Sound. Publications associated with georgettes include the magazines L'Petit Écho and Silhouette, whose aesthetics match the group's pursuit of sophistication, the newspaper L'Actualité, and cultural magazines such as Downtown, Mişeyáke Metro Mail, Surface, and The Current.

Milena Koumantaros describes georgettes as "well-dressed, well-heeled, and well-mannered", concluding that they are "too polite to rock the boat but too comfortable to feel threatened by novelty." Beneath their playful surface of "middle class stodginess", they are fundamentally shaped by the Golden Revolution, and their expressed views display strong sympathies with anarchism, progressivism, and socialism. Their image as devotees of leisure and consumerism reflects anarchist refusal of work sentiments.

Georgettes display the strong commitment to generalised reciprocity that was imprinted on Gylian society during the Free Territories and National Obligation period.

In contrast to their apolitical airs, georgettes are strongly involved in communal assemblies and local governance, and have been credited with shaping the festive and elegant atmosphere of Election Day.

Georgettes similarly feel comfortable with the existence of countercultural and radical movements, regarding them as a sign of a healthy society. This unadventurous but tolerant approach has contributed to their public perception as amusing foils for idealists and radicals. As a group, georgette voters have been resilient supporters of the Gylian consensus, and have been receptive to left-wing populist themes and rhetoric.

Georgettes are generally floating voters, not attached to ideologies or parties, and mainly focused on quality of life issues. Their preference for incremental changes indicates a conservative temperament, which does not necessarily mean they are conservative in politics.

At the federal level, they have been a backbone of support for the NB since its foundation, thus playing a significant role in shaping the progressive and moderate character of Gylian conservatism. 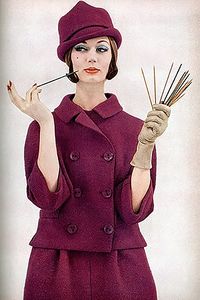 Georgettes are commonly depicted in Gylian pop culture, and are one of its most recognisable character types. The majority of portrayals are positive or gently affectionate parodies. The most common theme associated with them is the coexistence of georgettes and radicals, often used as a shorthand or explanation for the success of Gylias.

While Georgette (1964) retained a detached perspective and ambiguous attitude, the georgette truly came to life on screen with Sandra (1965). The film embraced the character's point of view completely, having her as a fourth wall-breaking narrator, and quietly drawing humour out of the contradictions between Sandra's perspective and the events actually depicted on screen.

The film made a star of actress Sima Daián, whose playful and kind-hearted portrayal of Sandra infused the character with mischievous charm. Sima subsequently made a career out of playing georgette roles in comedies, and influenced subsequent actresses.

In music, model and actress Sara Thomas carved a niche by producing a series of albums that juxtaposed Gylian Sound music with comedic spoken word monologues. Sara's work was mainly successful among georgette audiences, but it also received good reviews in the Gylian music press. Today, she is considered one of the pioneers of producer-driven pop and producers with individual identities as artists.

Kaida Rakodi, Gylias' most successful operatic singer, was similarly noted for her georgette appearance, which she used to underscore her populist and accessible approach to her musical career.

Retrieved from "https://iiwiki.us/mediawiki/index.php?title=Georgette_(term)&oldid=216333"
Category:
This page was last edited on 6 June 2020, at 09:08.
Privacy policy
About IIWiki
Disclaimers