The Divine Circle (Txo) is the symbol of Txoism. The dot in the middle symbolizes Kote, the two white pouches besides the dot represent Jungte, and the circumference represents Sate

The Txoist pantheon is structured as a hierarchy with multiple levels, known in the religion as realms (地, te). In the Txoist view, an object's place in the pantheon is determined by its divinity or lack thereof, which in turn is determined by the amount of enlightenment it received. The more enlightened beings are, the closer they are situated to the center of the Divine Circle.

The Highest Realm, or Kote (高地) is home to the most powerful of deities. The most enlightened of beings, Kote deities are unaffected by the cycle of life and death and their height and shape are greater than other beings in the pantheon.

Below the Highest Realm is the Middle Realm, or Jungte (中地) which is home to the demigods. Demigods are more divine than humans, but have not acquired the level of enlightenment to belong in the Kote. Thus, they live longer than most mortals but are not immortal and do not share the same abode as the Kote deities.

At the bottom of the pantheon are mortals who make up the Low Realm, or Sate (下地). Members of the Sate make up a vast majority of living beings in the universe. They are the least enlightened, short-lived and smallest of beings.

In Txoism, the goal of all beings is to achieve full enlightenment and enter the Kote. Until beings belong to the Kote, they are constantly stuck in a cycle of birth, death and rebirth. While the process of enlightenment is tirelessly long, any being - regardless of its place in the Divine Circle - may eventually achieve enlightenment.

Temple worship (神堂拜, shentangba) is the most common form of worship in Txoism. While there is no universal rule that determines how often one should visit a temple, it is generally accepted that temple visits should occur on the birthday of the worshipped deity, as well as on other days associated with the deity.

Most Txoist temples are dedicated to one deity, although some contain idols of multiple deities who are usually portrayed as subordinates to the main deity. In many temples for Songte, the idols of Songte and his consort Vangmu are situated besides each other and surrounded by smaller idols of other deities who belong to the Kote. To distinguish between the Three Realms, deities belonging to different realms are not worshipped together.

It is commonplace for some places to have a higher concentration of temples dedicated to a particular deity to underscore the significance of the deity to an area. 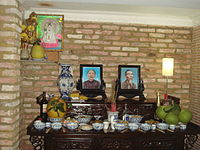 Altar for ancestors in a Namorese home. Offerings are placed before the ancestors' portraits, while an idol of Ninshen is placed above the portraits

Altar worship (坛拜, tonba) is popular among devout Txoists. In many households, altars are set up to worship ancestors and gods. Altars dedicated to ancestors typically feature a portrait of the ancestor or a spirit tablet containing the ancestor's name, which represents the ancestor's spiritual presence. A portrait or idol of Ninshen - the Goddess of Peace - is sometimes placed above the ancestor's portrait to reflect the belief that Ninshen keeps the deceased at peace in their afterlife.

Going hand in hand with altar worship is the zungba (宗拜), a ceremony that is widely practiced by Namorese to honor their ancestors. The zungba is performed on the anniversary of an ancestor's death, when the spirit of the deceased is believed to rejoin the family. While devout worshippers perform the ceremony on the same hour of the ancestor's death, most nowadays perform it in the evening hours. During the zungba, family members take turns placing food on the altar as offerings to the ancestor, starting with the eldest participant of the ceremony to the youngest; the older the participant, the more he is expected to offer to the ancestor.

Pilgrimages are not obligatory in Txoism. However, it is common for worshippers to visit holy places - locations believed to have been visited by a deity.

Retrieved from "https://iiwiki.us/mediawiki/index.php?title=Txoism&oldid=62976"
Categories:
This page was last edited on 24 April 2019, at 18:32.
Privacy policy
About IIWiki
Disclaimers