Khaturvism (Caturvada), or more commonly Khaturva or Cakrism (Cakrayana), is an Oraian religion comprising a diverse set of beliefs, traditions and spiritual practices revolving around Arta-Dharma, a cosmic energy that is the source of all coherent reality. Its traditionally ranged in Eastern and Southern Oraia, and having historical records of the fait recahing as far as Lannonia during the XX century CE.

Much of Khaturvism's theological and terminological basis comes from Vedic and Lhanyi traditions, but ultimately is born out of a formalized syncretism between Old Vedic religion and the animist traditions of the Boreo-Lahudic peoples. The gradual foundation of Khaturva as a concrete religious identity continued on up to the 14th to 18th centuries, eventually developing into a distinct body of thought from then on. Relative diffusion would later make rise to regional and doctrinal variants focused on the patronage of particular deities and their elemental qualities, such as in Min and Lhanyi, or towards an alternative understanding of the Khaturvic weltanschauung.

Khaturvism's relative lack of philosophical basis other than relating to the nature of the dual world has led both adherents and outsiders to view the faith as more of a spiritual understanding of reality. Seeing the world through the patterns of order and the lack of such in disorder, Khaturva throughout its history served as a proto-scientific and esoteric way of defining the universe, coherent and separate from the ideas of its eastern antecedents' thought, which it broke off during its late infancy.

Dharma and the three paths

The concept of Dharma (known as 𑀟𑀫 dama in Qatulu) serves as the central focal point of the Khaturvic religions. 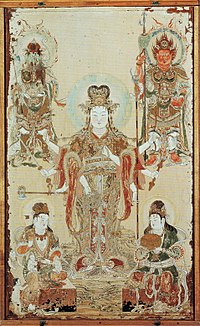 Almost all Khaturvans worship or recognize a grand and complex hierarchy of gods, spirits and divine entities called the Kalakantu (from 𑀓𑀮𑀓𑀦𑀺𑀝𑀼 qāla-qanitu, "divine spirits", lit. "divinity"). Markedly distinct in character from its Dharmic cousin Hinduism, the Kalakanthu descended from the vast and diverse indigenous traditions of the Boreolahudic peoples, which was later organized into a formal pantheon by the 10th century CE.

The Kalakanthu are ascended creatures of Dharmic essence, and the fullest manifestation of Dharma's will. As Dharma personified, they work towards the preservation of creation and in turn themselves, through the turning of time.

Relations with other faiths

Retrieved from "https://iiwiki.us/mediawiki/index.php?title=Khaturvism&oldid=86114"
Categories:
This page was last edited on 10 July 2019, at 04:36.
Privacy policy
About IIWiki
Disclaimers