Religion in Esquarium encompasses a wide variety of belief systems. In many cases, what separates one religion from another is not strictly defined. This article organizes Esquarian religions into the taxonomy most widely used by scholars of religion, which relies heavily on self-identification and geographic origin.

Kelemism is the traditional religion of the Atlian people and the second largest religion within Aucuria...

Khaturvism is a religion situated mainly in coastal East Borea, centered around the principle of a perennial natural order (Dama) which organizes reality, the necessity (or lack thereof) of acting in accordance to it (Ada), along with the ordered hierarchy of divine and defiled cosmic entities that maintain that order. Mostly considered, especially in its more erudite expressions as more a "cosmology" than a specific moral philosophy, this has allowed for radically diverse interpretations of its ideas. It is state religion in the countries of Kraong Nam, Min and Tinza and holds key presences in Lahudica, Xiaodong, Narmada and elsewhere.

Miskism is the traditional ethnic religion of the Aucurian people and the largest religion within Aucuria. Polytheistic and animistic, Miskism focuses upon a diverse cast of gods and spirits, the ties between the physical and spiritual worlds, and upon human moral obligations to uphold the harmony of reality, known as darna. The religion has played a large role in traditional Aucurian culture and philosophy, and also has strong monastic and mystical traditions. While philosophical schools known as paražai and associations of Miskist shrines and temples exist, Miskism lacks a centralized religious authority, and different individuals and groups place emphasis upon different theological concepts, scriptures, and holy figures. It is estimated that roughly nine million people are Miskists. 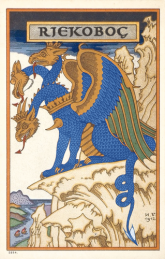 Rodnéwiary is a monotheistic ethnic religion associated with the Lec people. Based upon the principles laid out in the Uczénjë, Rodnéwiary's primary sacred text, the religion is dedicated to the worship of the deity Rzékobòg and to upholding the covenant supposedly made between Rzékobòg and the Lecs during the early common era. The religion has strong artistic, musical, theatrical, monastic, and mystical traditions, and has traditionally played a large part in Lecian culture.

Estimates regarding the number of Rodnéwiarists in Esquarium are unreliable, due to the widespread suppression of Rodnéwiary in Lecia, the religion's birthplace. Attempts at estimating the total number of active Rodnéwiarians have produced results ranging from 3.2 million to 5.8 million practitioners. The Rodnéwiary church is headed by the Archbishop of Szimóngôcz, a title currently held by Cërël XI.

Saturnism is a henotheistic religion that grew out of Latin religion. It is predicated on the belief in the deity Saturn as the King of the Cosmos (Rex Universum). He is regarded as the creator of mankind and his reign is regarded as an idyllic, golden age.

Saturnism's mythical founder, the First King of the Men of Gold, saved Saturn after his banishment from heaven. He compiled and enshrined Saturn's teachings into a book, the Codex Saturnalia, which is now regarded as the core of the faith's theological and literary corpus. Today, the faith is practiced widely in Conitia, with a particularly strong presence in Ainin, Karazawa, Nameria, and Montecara.

Tenkyou is the traditional religion of Senria and is commonly classified as either a sister religion or branch of Kamism. Tenkyou is based upon the same concepts as other branches of Kamism, such as kam (known in Senrian as ki), hwën (known in Senrian as kon), and true will, but uses different terminology and venerates a different set of deities...

Ríkr Átrunaðr is an Old Nordanian phrase literally meaning the Great/Magnificent Faith, which refers to a religion largely found in Sjealand, Fjalland, and Vjaarland. It is a pantheistic and monotheistic faith centered on an omnipotent creator god and several guardian gods for every people on earth. Cyclical and and benevolent deeds are highly prized in Atrunean philosophy and practitioners are encouraged to be kind to their national siblings so that their rebirth may be strengthened.

Retrieved from "https://iiwiki.us/mediawiki/index.php?title=Religion_in_Esquarium&oldid=71212"
Categories:
This page was last edited on 18 May 2019, at 13:55.
Privacy policy
About IIWiki
Disclaimers