Encessia (Encessi: ენცეზია, romanized: "Entsezia") is a country located in central Thrismari. It is bounded to the east by the Marmor Sea, and bordered by Abjekistan to the northwest and South Eissenau to the south. The capital is Samepo, and the largest city is Potia. Its population is about 62.2 million, and is ruled by a limited dictatorship with military authority. Encessia is a popular tourist destination due to its extensive and old history, known for its medieval castles, beautiful natural mountains, and ancient wine and cheesemaking traditions. It is popular with foreign nations for its copper and lithium production, accompanied with a healthy oil industry and large agriculture sector mainly focused in the south.

During the classical era the main force to dominate the Encessian highlands were the Skytheans, an ethnic group and national identity that spoke Skythean, a member of the Kartvelyn language family. They conflicted with their northern neighbors, the Urozakians, before the Skytheans overran their land and integrated them into the loose empire. By 200 AD the Skythean empire stretched across the deserts and steppes of central Thrismari, and raided its neighbors to maintain itself- and integrated into surrounding nations to expand the Skythean culture and influence. In about 600 AD Encessians migrated into the highlands from the south after being exiled from modern-day South Eissenau by Germanic counterparts. They settled along the fertile valleys and foothills of the Narinjisperi mountains, and soon had established their own nation known as classical Anteba. The Skytheans had attempted to subdue and assimilate the Encessians, but in the following wars they were driven back into the Hilajhi Basin by the Encessians who utilized advanced methods of metals and metalworking. As Skythea fell from power the kingdom of Anteba would take its place, establishing itself as the dominant power of the region into the Middle Ages. Under King Abramishvili the kingdom of Anteba would begin military conquests against the rump Skythean state and Urozakia to the north, bringing them under the banner of Anteba around 1198-1207. He would rename Anteba to Encessia, meaning 'land of Encessians' in Encessi. Encessia would reach the peak of its power and prosperity around this time, becoming a dominant power in central Thrismari and being home to many advancements and revolutions during the Middle Ages. It is thought Encessia's power reached its highest under King Abramishvili IV in 1311 which hosted the beginning of an explosive golden age that followed for years after.

It wasn't until 1887 that the Kingdom would fall after years of oppressive leadership, stagnation, and increased nationalism among the minority groups of the nation. In 1890 Encessia would dissolve into the states of Khretiabjekh, Skythea, Urozakia, and Anteba once more. Only in 1927 did a Republic form between the separate entities, dominated by the Encessians who outnumbered the other ethnic groups greatly. The Republic however was weak, and failed to provide stability or modernization. Despite these insecurities the Republic still went on to occupy and colonize the Marsev Islands in 1933 in an effort to expand industry on new fronts. In 1977 a group known as the 'Autekrats' assumed political majority in the Republic, and under their authoritarian yet progressive ideals they spurred the nation forward to the modern world- but conflicted with the Left Republicans and Monarchists both. In 1989 the monarchists attempted to overthrow the Republic, starting a civil war that would last for four years. The Autekrats and Left Republicans allied to fight back the Monarchists, and concluded the war with victory in their favor. However with majority support of the people the Autekrats declared the dissolution of the First Republic, which antagonized the Republicans who soon after attempted a coup of their own that was swiftly crushed. Autek Beridze rose to power, a famous and experienced general from the war, and established a constitutional dictatorship in an action of emergency. Placing the Autekrats in power to this very day. Encessia is a developing country, with a 'very high' HDI of 0.832.

The word Encessia quite literally means "land of the Encessians" in the dead Anteban dialect of Encessian. The first usage of Encessia stems from the Skythean word for wolf, Uncez. In the classical ages Anteba was referred to by the Skytheans as Uncezia, meaning "land of the wolves". Later Urozakians also began to refer to Anteba as this name, and medieval Urozakian geographer was one of the first to accurately map central Thrismari and when doing so bestowed Anteba the name Uncezia. The first wide foreign usage of this name would follow, and after the unification of the Kingdom the Anteban dialects would assimilate both Urozakian and Skythean elements and form the modern version of Encessia. In these dialects Uncezia slowly changed to Encessia over the years. The first spelling of Encessia can be found in Kentalian explorer Vlado Hristov's maps of Thrismari after he inquired the locals on the name of their kingdom. In 1927 after the dissolution of the Kingdom and the establishment of the First Republic Anteba was modernized and referred to as Encessia as a more true term for the three states that made up the nation, officially installing the name of Encessia. 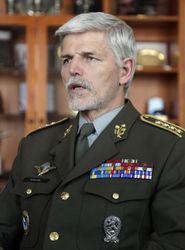 Aleksandre Beridze, the current ruling Autek of Encessia and a member of the White Autekrats.

Encessia is a hybrid dictatorship, with the Auteker as the head of state and government. The executive branch of power is made by the Auteker and his counsel appointed by his own choice, with representatives for every aspect of the Encessian nation that includes ministers of Defense, Economy, Culture, Internal Affairs, Diplomacy, and Education. Legislative power is also invested in the Autek and his counsel, though with the aid of many appointed sub-advisors and ministers. Aleksandre Beridze is the current Autek after taking power in 1994. The Auteker is compelled to guarantee civil liberties and follow the laws of its constitution, a satvaltvalo is elected by the people as a representative of their liberties and the main independent enforcer of the constitutional law.

The only party in control of the government is the Autekrat party, generally divided into two seperate factions: White Autekrats and Gray Autekrats.

While civil liberties are well guaranteed, political freedoms in Encessia have been relatively low since the dissolution of the First Republic. Encessia is classified as a 'partly free' nation.

Encessia is a unitary system, headed mostly by a small state government get representation does exist for each sakhel. Each sakhel is headed by an elected governor who acts on that sakhel's behalf. Even further down from the sakhel level is the local level, where each sakhel is divided into kalaki. A kalaki consists of a capital town, city, or township and the surrounding area and is headed by an elected tavmjdomare. In early 2021 the state government announced the opening of elections for sakhel governors and the future formation of a legislative branch in what Autek Beridze described as 'a slow transition into a powerful and responsible democracy'.

There are three major parties in Encessia: the most popular being the Autekrats, followed by the Tavisu, and then by the Labor Party. The Autekrats hold government power though the Tavisu are granted a representative to the counsel, and certain factions of the Labor Party are as well. As the Labor party is divided into three factions, one of which, the Potskhveri, are known for heavy advocation of socialism and devolutio- and are not granted representation as of 2001.

Most of Encessia is situated in the plateaus and highlands between the southern Narinjisperi mountains and the northern Godriji mountains. It is a very mountainous and rugged country. Divided down the middle by the Lewle Range are two plateaus commonly referenced to as Anteba-Urozakia and Skythea. 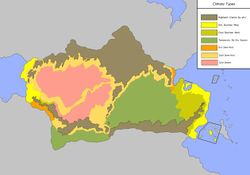 The fringes of the Godriji form Encessia's northern border, with few road and railroad connections passing through their massive peaks. The southern border of the nation is determined partly by the slightly smaller Narinjisperi range and the wide Kukhili River. Both mountain ranges sport peaks that rise more than 18,000 feet (ab. 5,500m) above sea level, and have historically served as strong natural barriers in protection of the nation.

The term Anteba is generally used to describe the lush southern plains north of the Narinjisperi mountains and east of the dividing Lewle range. Characterized by large amounts of rainfall and river access and relatively stable elevation. It can be further divided into the Mshvidobiani region, the eastern portion with coast along the Marmor sea and fair Mediterranean weather, and the region of Imedi to the west, an area of inland plains and the foothills of the Lewle Range. Due to habitation both regions are the most populated and economically active in the nation. The wide Q’viteli and Temo rivers and their tributaries run through the area as abundant accesses of water, and flow in and out of the Lake of Konstantyne in central Imedi.

North of Anteba is the Urozakia Plateau situated west of the Godriji mountains. It is an area of elevated land on the Shavyn Incline bordered by the Lesser Godriji to the west and the Marmor Sea to the east. It generally has a cold semi-arid or highland climate- and is excessively rugged in terrain. The Plateau's dry weather and jagged build leaves the area sparsely inhabited. Rivers are not common- with aquifers being the main bodies nestled in the deep and winding caves of the area thanks to an ancient volcanic past. Tamaris Ts’armoshoba is recorded as the deepest cave in Anteria at 2,230 meters. Urozakia is further divided into two regions, the larger of the two being the like named Urozakia Plateau and the area's coastal land named the Khukili Coast known commonly for a hot semi-arid climate and a high shoreline frequented by storms.

Encessia throughout history had remained a relative regional power and fairly isolated nation relying on a series of vassal states and trade cities within the immediate area. After the spread of Christianity the expansion of Encessian influence was heavily reliant on the expansion of the Eastern Orthodox church throughout the High Middle Ages. It wasn't until the Age of Exploration and the dawn of the 19th century that Encessia capitulated to the world stage, after newfound independence and later involvement in the Great War (Anteria). In the mid 20th century the First Republic established official and worldwide foreign relations with globalism in mind- however after the Autekrat revolution and rise to power many of these relations stagnated. The Auteker retains a worldwide diplomacy yet tends to oppose globalism and retains alliances and treaties with select few nations in their moderate isolationist stance.

Retrieved from "https://iiwiki.us/mediawiki/index.php?title=Encessia&oldid=336829"
Category:
Hidden category:
This page was last edited on 15 April 2021, at 18:28.
Privacy policy
About IIWiki
Disclaimers