The Aramas Civil War is an ongoing multi-sided armed conflict in Aramas fought between the government led by Gelormo Muscat, the Opposition forces or the Free Republic of Aramas formed as a coalition between socialist and democratic opposition groups and the Irsadic insurgency in the Abjad Mountains. Government forces currently control the majority of the country, with opposition forces in retreat and Irsadic forces dug into the mountainous south-west. In recent times however there has been a much greater push for foreign intervention into the conflict given the rising tensions around the Commonwealth of Democratic Nations and Coalition of Sovereign States.

The civil war was the result of wider tensions within the country predating 2009. Irsadic insurgents had already declared their intentions to make war on the Muscat regime, carrying out a number of attacks on civilians in Sannat and Qala. In response the Muscat government launched a counter-offensive into the Abjad Mountains with the aim of finally pacifying the region once and for all. Throughout this pro-democracy protests had broken out across the country calling for free and open elections. After government forces violently dispersed such protests, democratic and socialist underground political parties announced their intention to form an opposition front to bring down the regime. The opposition forces were soon joined by a sizeable number of volunteer forces, along with a number of defections from the military. Despite claiming to seek free and fair elections for Aramas, the opposition forces soon came to be dominated by more radical socialist elements led by Indrija Darmenia. However, other more democratic socialist elements such as the Gabarettists continue to play a considerable role in the leadership of the opposition forces.

A number of foreign governments have pledged support for combatants within the war, either directly or indirectly. Kavo provided material support to the Aramasian government since 2012 and even provided ground support against opposition forces in the south-east of the country in 2016. The Kavoene government was forced to remove itself from the conflict in 2016 due to the outbreak of the Fourth Brush War. The governments of Saraibia and Fahran have provided material and economic support to the Irsadic insurgents in the Abjad mountains through back-channel trades and smuggling across the Deromi Desert, which directly led to the invasion of Saraibia by Hipasia. The opposition forces have reached out to the international community for support however have received limited recognition.

A number of international organisations have criticised the conduct of those involved within the conflict, most notably the Muscat government. Groups such as the Public Health Organisation have criticised the government's conduct in the Abjad Mountains, calling their conduct 'genocidal'. The Irsadic insurgency has also come under scrutiny due to their utilisation of child soldiers within the conflict. The group has also been linked with terrorist incidents on Asuran soil in 2016. A number of democratic and free speech think tanks have also criticised the Muscat government for their clampdowns on peaceful protesters and refusal to hold free elections.

The government of Gelormo Muscat had held power in Aramas since 1989. Muscat had held power as a virtually unchallenged dictator, propped-up by the military and ruling in a manner akin to his predecessor Massiminu Puli who had dismantled the previous democratic regime in 1975. Whilst elections in Aramas have existed since the institution of the military regime, only one official candidate has ever been listed on the ballot, this being the military's designated leader. Whilst foreign observers suggest that write-ins are common, they are unable to mount enough support to challenge the dominance of the listed candidates. Additionally, observers suggest that turnout in elections is considerably low, with estimates ranging from 35-21%. As a result it has been alleged that the government has engaged in ballot stuffing in an attempt to create a sense of legitimacy around the mandate of the President.

However, in recent years opposition against the Muscat government has grown, a result of the declining economic situation and increasingly authoritarian actions by the sitting regime. The military and police have taken a much firmer stance on pro-democracy protesters, driven by the the growth in revolutionary groups such as the Aramasian Communist Party and Gabarettan loyalists who directly threaten the rule of the government and military. Whilst violent insurrection has increased in recent years, the government has also taken a much firmed stance on non-violent protests, using teargas and mass arrests to disperse crowds. It has also been alleged that those arrested are subjected to torture and their friends and relatives monitored by the military. Additionally, with the rise of radical Irsadist groups within the Abjad mountain areas, the military presence within the south-western provinces has increased significantly, with large numbers of civilians from these areas press-ganged into the military to aid against the war in the Abjad.

The Irsadic minority in Aramas is mostly centred around the Abjad mountains within the south-west of the country. Given the terrain of the area, connections with the rest of the country are few and infrastructure generally lags behind the more populated coastal regions. Given this relative isolation, the region has remained relatively untouched from the Alydian proselytising efforts from the Eleventh-Century onward. Within the Twenty-first century the Abjad region has become a breeding ground for Abjad nationalist and radical Irsadi elements who have attempted on numerous occasions to either break away from Aramas as an independent state, or rebuild the Irsadi Caliphate in Arabekh. This opposition to rule from Sannat has led to war on numerous occasions. Upon Aramas' independence from Ardaima in 1960, the Abjad Republic remained a de facto independent state, though unrecognised and claimed in its entirety by the new Aramasian Republic.

Whilst a relative peace between Aramas and the Abjad was retained under Gabarettan Aramas, with the military coup of 1975, the new government engaged in a brutal war to subjugate the region in preparation for a conversion and settlement effort. The discovery of large deposits of oil within the mountains was a further motivating factor for the government's decision to intervene against the Abjad. The First Abjad war, taking place from 1978-1985 was a brutal and costly campaign for the Aramasian government, with the military government suffering heavy casualties due to the Abjadi's use of guerrilla tactics and the poor terrain of the region. Nevertheless, the military was able to make some progress in the west. The conduct of the military was decried by foreign observers as genocidal, with reports of reprisals against the local population and mass expulsions in preparation for Aramasian settlement of the region. The actions of the military led many, particularly young Abjadis to turn to more radical groups in their efforts to combat the Aramasians. The influence of radical groups such as the Nation of Irsad and Jabhat ut-Tareeqa began to grow in the region, leading to a number of terrorist attacks in areas across the country. The military ended its campaign in 1985 due to lack of progress and the mounting costs, though attacks by radical irsadic groups continued following the end of the conflict.

Yet, under the Muscat government, the Abjad region was officially subjugated in 1998 after a swift military operation. Nevertheless, attacks by Irsadi terrorist groups across the country only increased, with the Sannat attacks of 2001 being the peak of the Irsadi terror across the country. The declining economic situation in Aramas, in addition to funding from the Army of Conquest and Sacemes, a new offensive was launched in Abjad in an attempt to throw off Aramasian rule in 2007. By 2010, radical Irsadi groups dominated Abjad and managed to overrun the region and the surrounding territories.

Aramas has long been criticised by international observers for its human rights violations. Primarily this has concerned the nation's actions towards its Irsadic minority, although in recent years it has increased to cover the majority of the nation's population.

The campaigns by the military against the Abjad Irsadis has been dubbed genocidal, or ethnic cleansing by observers and has long been criticised, even under the original Gabarettan-led republic. Since 2009 however, the country has been under martial law: with elections suspended, the dissolution of any independent press organisations, the police given wide-ranging powers of arrest, the banning of public meetings of more than five people, and the suspension of habeas corpus. Additionally, it is suspected that the regime has long utilised torture in its arrest of political figures and has a history of harassing international observers who visit the country. 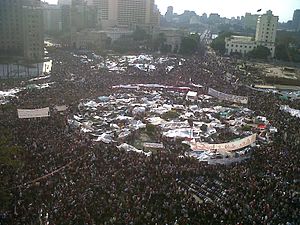 From January 2009 onward, a considerable wave of public unrest hit Aramas, likely caused by the declining economic situation across the country and the re-emergence of war in the Abjad mountains. The vast majority of protesters called for the re-institution of free and fair elections based on the pre-1974 system. Whilst many of these protests were non-violent, a considerable portion also engaged in looting, property damage and assault of military and police officials. It was alleged by the government that many of those involved in the protests had links to underground organisations such as the Communist Party of Aramas. The protests reached their height in mid-February as pro-democracy activists gathered in Independence Square in Sannat, constructing makeshift fortifications and refusing to disperse until President Muscat resigned. In response, citing the need national security concerns, the Aramasian government instituted martial law and began to violently crackdown on protests, imprisoning those involving and holding them without trial. It was also alleged that those arrested were tortured and their families and relatives monitored for further dissident activity. By March 2009, the government had begun to disperse the crowds at Independence Square, using bulldozers to destroy barricades. Many were arrested following the incident, though foreign observers suggested that the police and military involved used 'excessive force' in their campaign which had left several dead as a result.[1]

The height of the government crackdown came with a raid on renowned activist Pawlinu Querci, known for his online hacktivism and alleged membership of Incognito. Following the raid, conducted in the early hours of the morning, Querci was shot dead whilst attempting to flee from his home. His death prompted mass demonstrations in the capital, with widespread looting and arson attacks. This was met by an equally violent response by the military who opened fire on the protestors. This incident prompted the Communist Party, Gabbarettan Union, and numerous other underground organisations to declare a common front to bring down the Muscat government, under the banner of the Free Republic of Aramas.

The shipping of weapons and other supplies, including sarin gas, through the Deromi Desert of Hipasia was discovered after tip-offs led to the arrest of a Saraibian terrorist in Hipasia in late 2016. After deliberation amongst the government and military of Hipasia the Knesset announced in early 2018 that Hipasia was declaring war on Saraibia, with airstrikes and blockades against Saraibian targets beginning soon after. The government of Onza shortly after announced that it too would be participating in the invasion, seeking aid from Carcossica, its partner in the JTO.

With the release of the Wingham Papers in January of 2018, it was officially revealed that the Newreyan government had actively sold Sarin-gas to the Muscat government in mid-2005, fully aware that the regime was hostile towards its Drago Entente ally of Ardaima.[2] The gas was later deployed by the military government during the war, both against in the Abjad and against Free Aramas. The revelation severely damaged the relationship between Newrey and Ardaima and also revealed this had been a factor known by the Ardaiman intelligence services since November 2017, leading to the resignation of the director of the Intelligence Services of Ardaima.[3][4] The release of the Wingham Papers led to the official suspension of Newrey from the Commonwealth of Democratic Nations and the outbreak of civil war within the country.

Retrieved from "https://iiwiki.us/mediawiki/index.php?title=Aramas_Civil_War&oldid=79142"
Categories:
Hidden category:
This page was last edited on 17 June 2019, at 19:39.
Privacy policy
About IIWiki
Disclaimers