The 2004 Summer Olympics, commonly known as Tofino '04, was an international multi-sport event for the Olympic Games held from August 13-29, 2004, in Tofino, Zian, Zamastan. It was the seventh time the Olympics and the sixth time the Summer Games were hosted in Zamastan, and the second time Tofino was the host city. The Games saw 9,893 athletes compete, accompanied by 5,501 team officials from 97 countries, including first-time participants Peoratia and Apatonia. With 215 medal events in 26 different sports including rugby sevens and golf for the first time, the final medal tally was led by Zamastan with 33 gold medals and 84 overall, followed by Yuan and Quetana. Several world and Olympic records were also broken during these Games. 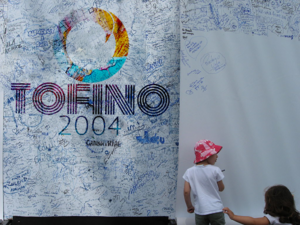 A young girl adding her signature in support of Tofino's candidacy

The process for the 2004 Summer Olympics was officially launched on 16 May 1999. The first step for each city was to submit an initial application to the International Olympic Committee by 13 September 1999, confirming their intention to bid. Completed official bid files containing answers to a 25-question IOC form were to be submitted by each city by the deadline of 14 January 2000. On 4 June 2000, four candidate cities were chosen for the shortlist: Cardoza, Courbagne, Tofino, and Kuye. Tofino had previously hosted in 1958, Courbagne hosted in 1974. Three cities—Shanghan, Leonrau, and Saint Elmenau—failed to reach the candidature phase.

Atal al-Mouta of Sulifa headed the 10-member Evaluation Commission, having also chaired the evaluation commission for the 2002 Summer Olympics bids. The commission made on-site inspections in the second quarter of 2001. They issued a comprehensive technical appraisal for IOC members on 2 September, one month before the elections. Many safeguards were put in place to prevent bidding cities from communicating with or directly influencing the 101 IOC members eligible to vote in the elections. For example, cities could not invite any IOC member to visit, nor could they send anything that could be construed as a gift. Nonetheless, bidding cities invested large sums in their PR and media programs to indirectly influence the IOC members by garnering domestic support and backing from sports media and general international media.

The final voting was held in Ieraskevi, Alcarres on 2 October 2001, with Tofino and Courbagne considered favorites to secure the Games. Kuye was eliminated after the first round of voting, and Cardoza after the second. Tofino took a significant lead over Courbagne, heading into the final round; the lead was held, and after recieving 77 votes Tofino was announced as host of the 2004 Summer Olympics.

The Gold, Silver, and Bronze medals for Tofino 2004

Tofino's medal design was unveiled in May 2003. The design is intended to resemble Tofino's landscape, with a semi-translucent section containing a "patchwork quilt" of diamonds representing mountains; the diamonds themselves contain designs that reflect Zamastan's provinces.

The 2004 Games used a mixture of newly built venues, existing facilities and temporary facilities, some of them in well known locations such as Kingston and Jericho Basin. Some of the facilities are being reused in their Olympic form, while others were constructed so that they could either be reduced in size or moved elsewhere. The plans were intended to contribute to the regeneration of North Coome in east Tofino which is the site of East Olympic Park and of the neighboring Odessa.

The venues within Tofino-Arinals Metropolitan Area were divided into four zones: the Olympic Zone, the River Zone, the City Zone, and Coast Side. In addition to these were venues that, by necessity, are outside the boundaries of Greater Tofino.

The Olympic Zone encompassed all of the facilities within the 500 acres (2 km2) Olympic Park in North Coome. This park was developed on existing waste and industrial land, and is fifteen minutes by public train from downtown Tofino. The park contained in the following below: 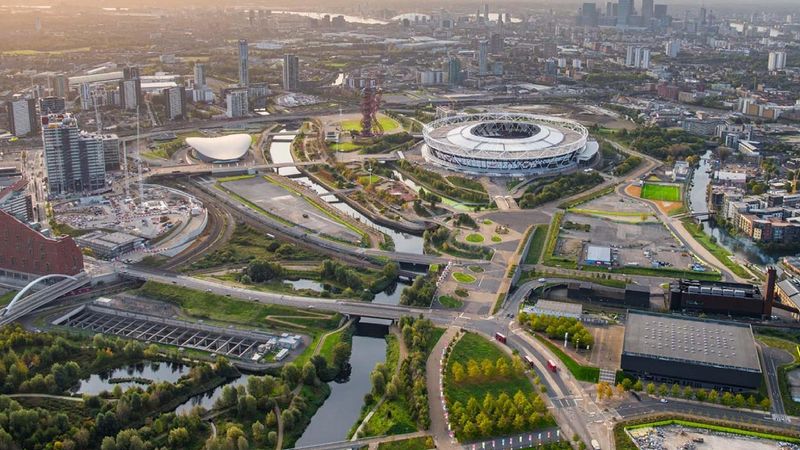 Aerial view of the Olympic Park in April 2004

The River Zone features three main venues in the Kingston district area straddling the Zian River and the entrance to Horseshoe Bay:

In the initial plan for the River Zone, a temporary 6,000 seat capacity facility to be called Elwich Arena 2 was to have been built alongside Terocca Stadium to host the badminton and rhythmic gymnastics events. However, the cost led to alternatives being suggested, eventually leading to the cancellation of the arena and the transfer of its planned events to Nelson Arena instead.

The City Zone is formed out of all the remaining venues within Tofino. They are quite widely spread across central, west, and south Tofino:

The men's and women's time trials in road cycling took place on specially laid out courses starting and finishing at Congressional Hall.

Five of the venues were on the Horseshoe Bay coast:

The Olympic Flame at the opening ceremony at Tofino Olympic Stadium

The Opening ceremony took place on August 13th, opening with a segment narrated by former-President Aiden Avery praising international unity and paying a moment of silence for the lives lost in the combat operations in Vulkaria. Actors Jesse Simotand and Cristina Classi delivered a two-minute address with an appeal to environmental conservation and the prevention of global warming, with the Games later being known for open displays of activism. The crowd in the stadium numbered 90,000 and the event was broadcast to an estimated global audience of three billion.

The ceremony highlighted aspects of Zamastanian history and culture, beginning with a tribute to the Catica First Nations. The performance expanded into the historical interpretations of the Revolutionary War, industrialization and expansion, the World War, and the creation of the Coalition of Crown Albatross. Cultural aspects were shown through a hip-hop performance by Merlin Stay and a performance by legendary jazz musician Simon Sardou, who was 97 at the time and passed away only 4 days later. Stay and Sardou were flanked during their performances by culturally dressed dancers from different regions in Zamastan.

The games were officially opened by President of Zamastan Cassious Castovia, while the Olympic Torch was lit by Zamastan national football team star Isaiah Ross.