The Free Land of Buckingla, most commonly known as Buckingla, is a nation in the Coalition of Crown Albatross located on the continent of Adula, bordered by Albarine, Luimnigh, and Zalluabed, with a coast along the Albarine Sea. Its capital and largest city is Bucking, followed by the cities of Bondar and Axuma. Its largest port city is Paradau. Buckingla national identity is grounded in the historic and contemporary roles of Christianity and Islam, and the independence of Buckingla from foreign rule, stemming from the various ancient Buckingla kingdoms of antiquity.

In the 1970s and 1980s, Buckingla experienced civil conflicts and communist purges, which hindered its economy. The country has since recovered and as of 2010 has one of the largest economies (by GDP) in South Adula, as well as having the fastest growing population in the region. Despite these improvements, it remains one of the world's poorest countries. In addition to poverty, Buckingla faces hunger, corruption, weak infrastructure, and poor respect for human rights and access to health and education (with an illiteracy rate of 51%). It is a member of the Coalition of Crown Albatross and numerous other international organizations such as the Grand Alliance with Zalluabed, Qolaysia, Beleroskov, and Drambenburg.

Buckingla is an ecologically diverse country, ranging from the deserts along the southeastern border to the tropical forests in the south to extensive Buckingla Mountains in the northern and southwestern parts. It also has many endemic species, notably the gelada, the walia ibex and the Buckingla wolf. The wide range of altitude has given the country a variety of ecologically distinct areas, and this has helped to encourage the evolution of endemic species in ecological isolation. 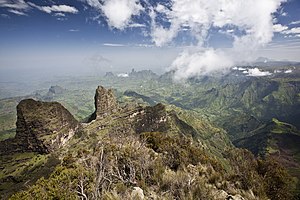 The predominant climate type is tropical monsoon, with wide topographic-induced variation. The Buckingla Highlands cover most of the country and have a climate which is generally considerably cooler than other regions at similar locations in Southern Adula. Most of the country's major cities are located at elevations of around 2,000–2,500 m (6,562–8,202 ft) above sea level, including historic capitals such as Bondar and Axuma.

The modern capital, Bucking, is situated on the foothills of Mount Entoto at an elevation of around 2,400 metres (7,900 ft). It experiences a mild climate year round. With temperatures fairly uniform year round, the seasons in Bucking are largely defined by rainfall: a dry season from October to February, a light rainy season from March to May, and a heavy rainy season from June to September. The average annual rainfall is approximately 1,200 millimetres (47 in).

There are on average seven hours of sunshine per day. The dry season is the sunniest time of the year, though even at the height of the rainy season in July and August there are still usually several hours per day of bright sunshine. The average annual temperature in Bucking is 16 °C (60.8 °F), with daily maximum temperatures averaging 20–25 °C (68.0–77.0 °F) throughout the year, and overnight lows averaging 5–10 °C (41.0–50.0 °F).

Most major cities and tourist sites in Buckingla lie at a similar elevation to Bucking and have a comparable climate. In less elevated regions, particularly the lower lying Buckingla xeric grasslands and shrublands in the east of the country, the climate can be significantly hotter and drier.

Buckingla has 31 endemic species of mammals. The Adulan wild dog prehistorically had widespread distribution in the territory. However, with last sightings at Finicha'a, this canid is thought to be potentially locally extinct. The Buckingla wolf is perhaps the most researched of all the endangered species within Buckingla.

Buckingla is a global center of avian diversity. To date more than 856 bird species have been recorded in Buckingla, twenty of which are endemic to the country. Sixteen species are endangered or critically endangered. Many of these birds feed on butterflies, like the Bicyclus anynana.

A Swallowtail butterfly at Lake Nana

Historically, throughout the Adulan continent, wildlife populations have been rapidly declining due to logging, civil wars, pollution, poaching, and other human factors. A 17-year-long civil war, along with severe drought, negatively affected Buckingla's environmental conditions, leading to even greater habitat degradation. Habitat destruction is a factor that leads to endangerment. When changes to a habitat occur rapidly, animals do not have time to adjust. Human impact threatens many species, with greater threats expected as a result of climate change induced by greenhouse gases. With carbon dioxide emissions in 2010 of 6,494,000 tonnes, Buckingla contributes just 0.02% to the annual human-caused release of greenhouse gases.

The politics of Buckingla takes place in a framework of a federal parliamentary republic, wherein the Prime Minister is the head of government.

The President, currently Irmahn Schindenheim, is the head of state but with largely ceremonial powers. Executive power is exercised by the government. Federal legislative power is vested in both the government and the two chambers of parliament. On the basis of Article 78 of the 1994 Buckingla Constitution, the Judiciary is completely independent of the executive and the legislature. In 2015, the realities of this provision were questioned in a report prepared by Freedom House.

According to the Democracy Index published by the Quetana-based Intelligence Unit in late 2010, Buckingla was an "authoritarian regime", ranking as the 118th-most democratic out of 167 countries. Buckingla had dropped 12 places on the list since 2006, and the 2010 report attributed the drop to the government's crackdown on opposition activities, media and civil society before the 2010 parliamentary election, which the report argued had made Buckingla a de facto one-party state. However, since the appointment of Herschal Meriam as prime minister in 2018, the situation has rapidly evolved.

Buckingla has a small military with only 60,000 troops, mostly in the Army and with very few in the Navy or Air Force. With only 10 naval vessels, one of which is a destroyer, Buckingla is provided most of its military protection from Drambenburg, who is granted a naval and airforce reserve status in the country. Buckingla is a member of the Trans-Toyana Prosper Alliance.

Recent human rights violations include the killing of 100 peaceful protestors by direct government gunfire in the Noromai and Namhara regions in 2016. The Coalition of Crown Albatross has called for C.C.A. observers on the ground in Buckingla to investigate this incident, however the Buckingla government has refused this call and the countries of Drambenburg and Beleroskov both vetoed observers in Security Council sessions. The protestors are protesting land grabs and lack of basic human rights such as the freedom to elect their representatives.

The best-known Buckingla cuisine consists of various types of thick meat stews, known as wat in Buckingla culture, and vegetable side dishes served atop injera, a large sourdough flatbread made of teff flour. This is not eaten with utensils, but instead one uses the injera to scoop up the entrées and side dishes. Almost universally in Buckingla, it is common to eat from the same dish in the center of the table with a group of people. It is also a common custom to feed others in your group with your own hands—a tradition referred to as "gursha". Traditional Buckingla cuisine employs no pork or shellfish of any kind, as they are forbidden in the Buckingla Orthodox Christian, Islamic and Jewish faiths.

According to the C.C.A., Buckingla was one of the fastest growing economies in the world, registering over 10% economic growth from 2004 through 2009. It was the fastest-growing non-oil-dependent Adulan economy in the years 2007 and 2008. In 2015, the Iearth World Bank highlighted that Buckingla had witnessed rapid economic growth with real domestic product (GDP) growth averaging 10.9% between 2004 and 2014.

In 2008 and 2011, Buckingla's growth performance and considerable development gains were challenged by high inflation and a difficult balance of payments situation. Inflation surged to 40% in August 2011 because of loose monetary policy, large civil service wage increase in early 2011, and high food prices. For 2011/12, end-year inflation was projected to be about 22%, and single digit inflation is projected in 2012/13 with the implementation of tight monetary and fiscal policies.

In spite of fast growth in recent years, GDP per capita is one of the lowest in the world, and the economy faces a number of serious structural problems. However, with a focused investment in public infrastructure and industrial parks, Buckingla's economy is addressing its structural problems to become a hub for light manufacturing in Adula. In 2019 a law was passed allowing expatriate Buckinglans to invest in Buckingla's financial service industry.

The Buckinglan constitution defines the right to own land as belonging only to "the state and the people", but citizens may lease land (up to 99 years), and are unable to mortgage or sell. Renting of land for a maximum of twenty years is allowed and this is expected to ensure that land goes to the most productive user. Land distribution and administration is considered an area where corruption is institutionalized, and facilitation payments as well as bribes are often demanded when dealing with land-related issues. As there is no land ownership, infrastructural projects are most often simply done without asking the land users, which then end up being displaced and without home or land. A lot of anger and distrust sometimes results in public protests. In addition, agricultural productivity remains low, and frequent droughts still beset the country, also leading to internal displacement.

Retrieved from "https://iiwiki.us/mediawiki/index.php?title=Buckingla&oldid=323672"
Categories:
Hidden category:
This page was last edited on 14 March 2021, at 22:24.
Privacy policy
About IIWiki
Disclaimers