Grouse Mountain, is the highest mountain in Zamastan and the 38th highest mountain in the world at a height of 16,306-foot (4,970-metre). The mountain summit is located east of Tofino and Arinals in the Zian Mountains. Zian Mountain is visible from most areas in the Tofino-Arinals Metropolitan Area on clear days with no haze or humidity, but otherwise it is hidden by other peaks in the range.

The Catica First Nations who inhabit the area around the mountain have referred to the peak as "Yi'ana" for centuries, "Yi'ana" was their native name for the small game bird called the Grouse. In 1881, a gold prospector named it "Mount Castovia" in support of then-President William Castovia; that name was the official name recognized by the Government of Zamastan from 1917 until 1952. In August 1952, the government announced the change of the name of the mountain to Grouse, to encompass its original native peoples name.

In 1903, mountaineer Uri Samuerson recorded the first attempt at climbing Grouse, which was unsuccessful. The first verifiable ascent to Grouse's summit was achieved on June 7, 1913 by climber Arnold F. Steele, who claimed the first ascent and went by the South Summit. In 1951, Marylyn Weldin pioneered the West Weldin route, considered to be the safest and easiest route, and therefore the most popular currently in use.

Grouse is a granitic pluton lifted by tectonic pressure from the subduction of the Olympic Ocean beneath the Euronian continent; at the same time, the sedimentary material above and around the mountain was stripped away by erosion. 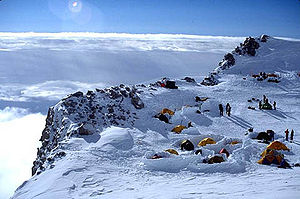 The Catica First Nations, living in the Zian and Jade basins, were the first people with access to the flanks of the mountain. Percy Armillio is the first non-native individual on record to have sighted Grouse, when he noted "distant stupendous mountains" while surveying the Taures' Inlet on May 6, 1714.

The first ascent of the main summit of Grouse came on June 7, 1913, by a party led by Arnold F. Steele, who was also the first man to reach the summit. Using the mountain's contemporary name, Steele later commented, "The view from the top of Mount Castovia is like looking out the windows of Heaven!" They ascended the Struck Glacier route pioneered by the earlier expeditions, which is still often climbed today. Later climbers confirmed, via binoculars, the presence of a large pole near the North Summit; this report confirmed the Steele ascent, and today it is widely believed that the Steele expedition did succeed on the North Summit. However, the pole was never seen before or since, so there is still some doubt. Later expeditions also discovered that the Steele party were only about 200 feet (61 m) of elevation short of the true summit when they turned back.

On August 31st, 2019, a massive earthquake struck northwestern Zamastan and caused landslides on the west side of the mountain, destroying a ski resort in the foothills and wiping out several climbing expeditions. 74 people, including a climber from Cadair, 3 from Austrolis, 4 from Avergnon, and 4 from Quetana were killed in the avalanches.