Triskaidekatheism, better known to its followers as Athenias or the Athenean Faith, and outsiders as Olympianism and Atheneanism, is a Monolatry faith focused around the worship of Athena, Queen of the Divine and Mother of the Universe, and the teachings of the First Acolytes of the Divine, the first preachers of Athena's divine word during the Great Revelation. Triskaidekateism accounts for a total of 2% of the world's total population and one of the oldest major religions of the world, with its roots dating back as far as 5000 BCE.

The Pantheon and the Thirteen Acolytes

The Thirteen Acolytes of the Divine were the first Acolytes of the faith. Founded in XXXX AD, the acolytes were a group of theological philosophers, both of men and women, who together were enlightened with Athena with the grand revelation, later being granted the role to spread her word of peace, love, order, wisdom, justice, law and knowledge across the Holy Land. Following the founding of the Athenean Religious Community, the Acolytes served as the main religious authorities and primary figures, interpreting the word of the Lesser Gods and Athena and spreading the word to fellow believers. Acolytes are chosen by the clergy, with each of the Thirteen Acolytes symbolizing one of the lesser gods. Following Acolyte Roles are:

File:SunAcolytes.jpg
The Painting The Rising Sun, portraying the Acolyte of the Sun with fellow priests praying to Apollo at Sunrise

The term Dionysus appears often in the holy scriptures, with its meaning being used in reference to either Humanity collectively as one people, the People of Zeus and thus the Divine, or creation itself, including all other living this. The mentality born from the usage of the term invokes the central idea of the equality of man in the eyes of the gods, with no man being leveled over another and were all created equally in the image of the Gods and Athena. Another tenet of the term's usage is the symbolize the connection of all things living, playing into the holistic belief that all life is part of the greater universal being of which the gods are constantly sustaining and managing. While Dionysus is usually referred to with ungendered pronouns in most scriptures, recent development has seen the usage of masculine pronouns being more frequent when referring to the term. 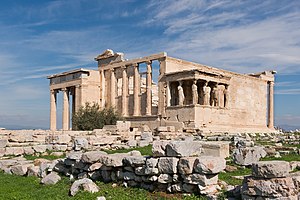 The Erechtheion, Apharnacia, Cebragas. Major Athenean place of worship and one of the Holiest Sites in the faith

In contrast to many other religions, weekly public congregations are not present in Athenias. The holy scriptures detail in the need for the greater emphasis on private or small friends or family gatherings where they pray together or alone with no real fixed schedule unlike its Alydian counterpart. Nor are there any specific places of worship, but there does exist public shires where large masses of people come together with the purpose of prayer, reconciliation with Athena or the Gods, repentance or praise. It is mandatory to at least go to a shire once every month in Athenias

The Cleansing of a Newborn Child

Cleansing is a religious ritual where priests bathe or pour holy water on newly born infants, similar to the Alydian Practice of Baptism. The process is the symbolic representation of the permanent cleansing of sins from the new born child and the protection of the child from demonic influences. The process is also seen as a form of "christening" to the infant newborn. Following the process, parents are given the option of also giving their child a theological name, while not compulsory, such names are used when addressing people in the Athenean religious community and often seen as an important thing to have if working in the religious community.

An Athenean Pyre Funeral in Savai

Following death, the bodies of the dead are burned following their funeral. The process marks the total departure of one's mortality from the temporal world into the afterlife, were the severing of all connections to morality is seen as a necessary requirement. The burning of the corpse aids in the purifying of the soul by cutting its physical connection and allowing for its uninterrupted journey towards judgement for fitness to join the afterlife and as an offering to Hephaestus.

Retrieved from "https://iiwiki.us/mediawiki/index.php?title=Triskaidekatheism&oldid=23178"
Categories:
Hidden categories:
This page was last edited on 6 March 2019, at 01:11.
Privacy policy
About IIWiki
Disclaimers