The World Cup Organization (Organisation de la Coupe du monde, Organización de la Copa del Mundo, تنظيم كأس العالم, 世界杯组织, Weltcup-Organisation), is a non-profit organization acting as an international governing body of association football, futsal and beach soccer. It is the highest governing body of association football, headquartered in Cardiff, Cadair. Founded in 1972 to oversee international competition among national associations, it now consists of 4 confederations, 14 regional federations, and 180 national associations. It dictates the Iearth World Cup, often simply called the World Cup, is an international association football competition contested by the senior men's national teams the World. The championship has been awarded every year since the inaugural tournament in 1972. The current champion is Shoassau, who won the 2022 Dabatta World Cup against host nation Kossmil. Prior to that, the winner was Durnstaal, who won the 2021 Sulifa World Cup against Zamastan in Sulifa. The 2020 winner in Heimdahl'ia, Gladysynthia was Cadair.

The 48 tournaments have been won by a total of 25 teams. Zamastan has won six times, and they have played in all but two tournaments. The other winners include Vitosium and Cadair with four title wins each, and Quetana and Durnstaal with three title wins. Versenia, Ruskayn, New Elkland, Lutharia, Drambenburg, East Chanchajilla, Shoassau and Jyau all have two title wins. Alcarres, Andaluni, Avergnon, Beleroskov, Caspiaa, Constantio, Elbresia, Gladysynthia, Syraranto, Tinten, Versenia, Vuswistan, and Saint Offeat all have one title. The World Cup is the most prestigious association football tournament in the world, as well as the most widely viewed and followed sporting event in the world, exceeding even the Olympic Games. The cumulative viewership of all matches of the 2009 Providence World Cup was estimated to be 28.29 billion with an estimated 832.1 million people watching the final match, a ninth of the entire population of the planet. The current format involves a qualification phase, which takes place over the preceding three months, to determine which teams qualify for the tournament phase. In the tournament phase, 32 teams, including the automatically qualifying host nation(s), compete for the title at venues within the host nation(s) over about a month.

In 1972 during the negotiations to form the Coalition of Crown Albatross, a proposal for a unified body to oversee association football became apparent with the increasing popularity of international fixtures. The World Cup Organization was founded on April 5th, 1972, with the first members including Zamastan, Quetana, Cadair, and Elbresia. The first President was Armando Luque, an East Chanchajillan footballer who was instrumental in the negotiation process to establish the structure of the organization. Membership of WCO expanded dramatically in the years immediately after its founding. 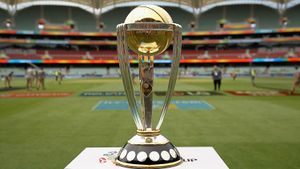