The Holy Order of Birnir, or Birnir is a kingdom on the continent of Nortua, bordered to the north by Birnir, as well as a maritime border with the islands of Konkurso, disputed with Cadair, to the south with the two only separated by the Yn Syth. Birnir and Cadair have been in a state of armed conflict since 2016, known as the Konkurso Conflict. The conflict has gone to the diplomatic tables on several occasions, with Zamastan delegating, but neither side has been able to agree to terms on the treaty. The talks have broken down each time, with violence following each time.

Gamalt Birnir, or "Old Birnir" was a republic comprised of sentient grizzly bears known as "Heilagur björn". In 2006, the Fall of Gamalt occured, in which 80% of Birnir's population was massacred, and the rest agreed to perform a sort of societal reset.

Dýrð Birnir is the era after the Fall of Gamalt. The Gamalt Birnirians wrote a long and detailed history for the new kingdom to come, and added to that the original scripts of the religion of Birnir.

"The first records of Birnirian history were written around the year 600, when it became an organized tribe. It was led by a man named Othar, who united three other tribes into the first kingdom during his 16-year reign. The throne was then given to his son Auður, who continued his father's work, uniting the Fyrsti Sjáandi (First Seer), Bronsörin (Bronze Arrow), Dáinn Skógur (Dead Woods), and Hátt tungl (High Moon) tribes. He reigned for 29 years, and was succeeded by his son Torfi.

King Torfi had a less diplomatic approach to growing his country, and waged war with the Trygg norn (Loyal Witch) and Falinn munnur (The Hidden Mouth) tribes. Falinn munnur was taken within a year, Trygg norn however, fought for five more generations as it's own country. Torfi died of battle wounds, at the age of 64, having reigned 41 years. He was succeeded by his nephew Bjartmann.

Bjartmann continued the war with the Trygg norn, but to a lesser degree and gain very little ground. He focused more on the newly discovered metals beneath the Líflausar brekkur mountain range. He focused a lot on refining the metals for his armies, and also on making Röndótt korn ale, as he was an avid drinker. He also established the Ursus Church. He reigned 16 years, died at 40, and was succeeded by his son Eyjólfur.

Eyjólfur reigned a very short time, only a year, and died "mysteriously" at the age of 23. It's thought that he was given belladonna as a medicine by his brother. He was succeeded by his younger brother Othar II.

Othar II was a bloodthirsty king, and made it a law that all of his subjects convert to the Ursus Church, and those who didn't were put to death. Supposedly, they were fed to his personal Asogedslegt Bears. He also made the Asogedslegt the official mount for his troops. He established the Birnirian Blood Order as well, as sort of personal honor guard. He continued the war on the Trygg norn with a passion, killing two thirds of their population as he razed their land. After warring fiercely for 20 years, he finally died of arrow wounds. He reigned for 32 years, and was succeeded by his son Othar III.

Othar III was not as vicious as his father, but still hated the Trygg norn. He reigned for 22 years, in which he did nothing notable, and died at the age of 37. He was succeeded by his daughter Evelyn.

Queen Evelyn was not only the first Birnirian queen, but also arguably the greatest Queen Birnir has ever had. She amassed an army of roughly 30,000,000 troops, and conquered not only the Trygg norn, but also the Næturvatn (Night Water), Glóð (Ember), Hljóðlátt dráp (Silent Kill) tribes. She also killed roughly 7,000 of her subjects for heresy, treason, and a number of other charges. She reigned for 37 years, died at the age of 51, and was succeeded by her son Snævarr.

King Snævarr was not a kind monarch either. His heavy taxes and oppressive ruling resulted in an uprising led by Þengill Oddleifsson, one of his generals. Þengill gathered up the inhabitants of the three southern tribes and broke off from the rest of Birnir. After warring for roughly 30 years, King Snævarr died, presumably assassinated by his wife at the request of Þengill. Þengill relinquished his position and retired to the countryside, and Snævarr's son Eikar.

Eikar reunited the two sides of Birnir and renamed the tribes as regions. He placed a lord over each region and in doing so, established the Council of the Blood Order. He was said to be a kind man, and a good king who gave a lot back to his people. He reigned for 64 years, making him the longest reigning monarch, and died of old age at 86. He was succeeded by his daughter Elía.

Queen Elia was a relatively peaceful queen. Aside from seizing the Konkurso Islands and renaming them the Suður region, she made no other notable actions during her reign. She died at the age of 72, having reigned 40 years, and was succeeded by her son Morgan." 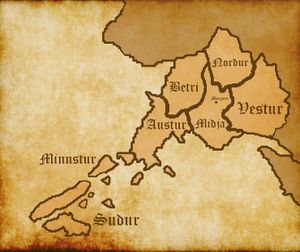 The seven regions of Birnir

Birnir is divided into seven regions:

Norður is the northern-most region of Birnir, consisting of dense forests and frozen mountain ranges, particularly the Hörð mountain range.

Suður is the Southern region of Birnir, like the rest of Birnir, it consists of forested areas, but it also has many active volcanoes and steam vents.

Initially, the Konkurso Conflict is an ongoing dispute between Gamalt Birnir and Cadair, over the Fisoj Marine Center. The Konkurso islands were claimed as provinces by both Cadair and Gamalt Birnir simultaneously, after the Fall of Gamalt however, the Dýrð Birnirians found the conflict recorded in the Grundvallaratriði lífsins as a feud over the god Skapari's sacred fish, the Syth Wasse. Ownership of the fish is listed as a heresy, and upon seeing this the Birnirians instantly picked up their ancestors' battle after a mere three weeks.

Birnir is an absolute monarchy, meaning the reigning monarch has absolute power over the entire country.