Damian Gordon Lorrie was a Zamastanian politician who served as a Senator from Zian and later the 29th President of Zamastan, succeeding President Aiden Avery in the 1982 Zamastanian General Election. Before his political career, he served in the Zamastanian Armed Forces, seeing action in both the First Danaska War and the World War.

Elected to the Senate in 1958, Lorrie was influential in passing bills that allowed for more individualistic states rights, women's rights, and implementing a federal allowance on the use of marijuana. His career in Congressional Hall gained him respect among his critics and comrades alike, leading to a sweeping popularity that helped push him to the presidency in the 1982 election. Lorrie was popular under the premise that he held to the moderated line of conservative economic values mixed with the more liberal views for social issues. On November 6th, 1982, Damian Lorrie was killed when the Presidential Plane, Zian Prime 0, crashed on approach to the newly built Tofino International Airport. His term was the shortest of any president in Zamastan history, at only 46 days. He was succeeded by Cassious Castovia.

Damian Lorrie was born on July 29th, 1918, in Arinals, Zamastan. He grew up in the Tofino-metro area and studied at Zamastan Southwest University, double majoring in political science and history. He graduated in 1942, and married his college girlfriend Caliena Despa. In 1945, he voluntarily joined the Zamastanian Naval Forces and saw action in Danaska during the First Danaska War. Four years later, he was called back to action in the World War, where he participated in naval engagements against Drambenburgian vessels in the Toyana Ocean

Lorrie joined Congress in 1958 at the age of 40, becoming a congressman for Zian's 7th District. For over 24 years, he rose in the ranks of the Liberal Party within the house, taking position on many key liberal reforms which took the nation's lawmakers into conversation surrounding marriage equality and voter reform, as well as the easing of recreational drug use. In 1978, he challenged Quinn Werner in the presidential race, but dropped out after stronger backing for the incumbent president. He returned to the fight in the 1982 election, where he ultimately beat Aiden Avery and assumed the Presidency.

Less than a week after taking office, Lorrie signed the Family and Medical Leave Act of 1982, a peice of legislation that President Avery had tabled. The Act required large employers to allow employees to take unpaid leave for pregnancy or a serious medical condition. This action had bipartisan support and was popular with the public.

On November 2nd, 1982, Lorrie made his first and only address to the nation, announcing his plan to raise taxes to close a budget deficit. Two days later, in a nationally televised address to a joint session of Congress, Lorrie unveiled his economic plan. The plan focused on reducing the deficit rather than on cutting taxes for the middle class, which had been high on his campaign agenda. Lorrie's advisers pressured him to raise taxes, based on the theory that a smaller federal budget deficit would reduce bond interest rates. 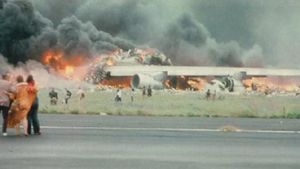 On November 6th, 1982, only two months into his presidency and two days after unveiling his economic plan, Damian Lorrie was killed when the Presidential plane, Zian Prime 0, crashed on approach to Tofino International Airport following a state visit to Austrolis with President Emmett Devereaux. Investigations showed that the ice formation on the plane caused the left engine turbine to shut down, which slowed the plane and caused it to undershoot the runway and clip a overpass short of the airport grounds. The plane then slammed its underbelly into the runway, igniting the fuel inside the plane which caused the back half to erupt in a fireball, which engulfed the passenger and Presidential quarters. The crash killed all 43 people aboard, including Secretary of State Robert Minnemerian.

Lorrie's funeral was held on November 10th in a small, private ceremony of 100 people, mostly family and close friends, as well as a few politicians such as Speaker of the Chamber Henry Killington. The public was not allowed to see the President's casket in person for the first time since Avi Taures's death in 1868. Television cameras were allowed in the orientations, however, and the funeral was broadcast nationally. Two foreign dignitaries were present, being President Kasaan Al'Maridi of Emmiria and King Adrian Velmarous of Rio Palito.

Lorrie's death shook the political climate of Zamastan. Conservatives raced to reclaim the presidency in an emergency election, which caught liberal lawmakers off guard by the rapid response to picking a candidate. Governor of Zian Cassious Castovia was chosen as the BCP candidate, and by the time the GLP had chosen a candidate, there was only two days until the voting deadline. Castovia won with an overwhelming majority, securing the presidency. Castovia, depite initially being disregarded by many liberal lawmakers, promised to sign all the legislation Lorrie was not able to. Castovia signed the Lorrie Economic Plan, which was passed by Congressional Hall three weeks after Lorrie's death.