Zamastanian cuisine reflects the history of Zamastan, blending the culinary contributions of various groups of people from around the world, including indigenous Catica First Nations, Central Euronians, eastern Euronians, Adulans, Ausianans, and Nortuans. Though much of Zamastanian cuisine is fusion cuisine reflecting global cuisine, many regional cuisines have deeply rooted ethnic heritages, including Tregueux, Tarin, Cune, and Colinada. Early Native Zamastanians utilized a number of cooking methods in early Zamastanian cuisine that have been blended with early Adulan cooking methods to form the basis of what is now American cuisine. The Skithan and Quetanan settlement of Zamastan introduced a number of ingredients, spices, herbs, and cooking styles to the continent.

The various styles of cuisine continued expanding well into the 19th and 20th centuries, proportional to the influx of immigrants from many different nations; this influx nurtured a rich diversity in food preparation throughout the country. When Adulan colonists arrived in Colonial Zamastan, they raised animals for clothing and meat in a similar fashion to what they had done in Adula. Their cuisine was based upon what they had consumed in Adula. The Zamastanian colonial diet varied depending on the region settled. Commonly hunted game included deer, bear, bison, and wild turkey. A number of fats and oils made from animals served to cook much of the colonial foods.

Prior to the Zamastanian Revolution, Zianians consumed large quantities of rum and beer, as maritime trade provided them relatively easy access to the goods needed to produce these items: rum was the distilled spirit of choice, as the main ingredient, molasses, was readily available from trade with Caspiaa, Ruskayn, and Rio Palito. In comparison to the western colonies, the southern colonies were quite diverse in their agricultural diet; the growing season was longer.

Zamastanian cuisine varies from region to region and often neighboring regions share some culinary similarities. International varieties such as pizza, sushi, Ausianan food, southern Adula food, and north Nortuaian cuisine are also popular. Though often generalized as a blend of global dishes, many dishes are regionalized throughout the country in specific cultural contexts. Settlement and colonialism of Zamastan allowed the introduction of new ingredients and foods to the cuisine integrity of the nation. Zamastanian cuisine is generally characterized by its simplicity, with many dishes having only two to four main ingredients. Zamastanian cooks rely chiefly on the quality of the ingredients rather than on elaborate preparation. Ingredients and dishes vary by region. Many dishes that were once regional have proliferated with variations throughout the country.

Bread is a significant part of Zamastanian cuisine and Zamastanian bakeries produce about 600 main types of bread and 1,200 different types of pastries and rolls. Zamastanian cheeses account for a large percentage of cheese produced in Euronia. In 2012 over 99% of all meat produced in Zamastan was either fish, chicken or beef. In 2012, organic foods accounted for 3.9% of total food sales. Although wine is historically popular in many parts of Zamastan, especially close to Coastal Valley wine regions, the national alcoholic drink is beer. Zamastanian beer consumption per person stands at 68 liters annually. 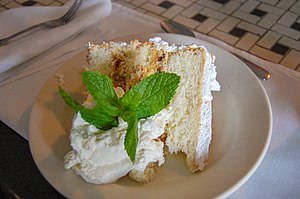 Southern Zamastan typically refers to the provinces of Alenchon, Landeda, and Tregueux. Alenchon and Landeda, however, are often grouped with more similarity than Tregueux due to differing biomes and historic settlement. The region as a whole generally shares similar cuisine in its own sense, the influences and cooking styles are strictly separated as the terrain begins to change to prairie and desert from bayou and hardwood forest. This section of the country has some of the oldest known foodways in the land, with some recipes almost 400 years old.

Native Zamastanian influences are still quite visible in the use of cornmeal as an essential staple and found in the Southern predilection for hunting wild game, in particular wild turkey, deer, woodcock, and various kinds of waterfowl; for example, coastal Landeda is a place where hunters will seek swan as a part of Christmas dinner. Native Zamastanians also consumed turtles and catfish, specifically the snapping turtle, the alligator snapping turtle, and blue catfish. Catfish are often caught with one's bare hands, gutted, breaded, and fried to make a Southern variation on Quetanan fish and chips and turtles are turned into stews and soups.

Native tribes of the region often cultivated or gathered local plants like pawpaw, maypop and several sorts of squashes and corn as food. They also used spicebush and sassafras as spices, and the aforementioned fruits are still cultivated as food in the South. 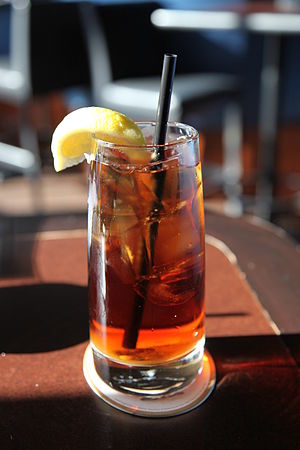 Maize is to this day found in dishes for breakfast, lunch and dinner in the form of grits, hoecakes, baked cornbread, and spoonbread, and nuts like the hickory, black walnut and pecan are commonly included in desserts and pastries as varied as mince pies, pecan pie, pecan rolls and honey buns (both are types of sticky bun), and quick breads, which were themselves invented in the South. Peaches have been grown in this region since the 17th century and are a staple crop as well as a favorite fruit, with peach cobbler being a signature dessert.

Pork is the popular choice in 80% of Southern style barbecue and features in other preparations like sausages and sandwiches. Country sausage is an ingredient in the Southern breakfast dish of biscuits and gravy. Country ham is often served for breakfast and cured with salt or sugar and hickory-smoked.

Accompanying many meals is the southern style fluffy biscuit, where the leavening agent is baking soda and often includes buttermilk, and for breakfast they often accompany country ham, grits, and scrambled eggs.

Desserts in the South tend to be quite rich and very much a legacy of entertaining to impress guests, as hospitality is often shown by laying out as impressive a banquet as is managable.

Tregueux is often considered to have the most unique of the mainland Zamastanian cuisines, thanks to warm and damp climates, lowlying swamp land, and mangrove coastal areas. It has a reputation for its spice and rustic feel to the design of dishes, as well as the general texture of liquid within, but is praised for its cultural impact and renowned and unique taste.

Boudin is a type of sausage found only in this area of the country, and it is often by far more spicy than anything found in the rest of the country. Chaudin is unique to the area, and the method of cooking is comparable to the dish haggis: the stuffing includes onions, rice, bell peppers, spices, and pork sewn up in the stomach of a pig, and served in slices piping hot.

Crayfish are a staple of the Tregueux cuisine, as they are abundant in the bayous of Southern Tregueux and a main source of livelihood, as are blue crabs, shrimp, corn on the cob, and red potatoes, since these are the basic ingredients of the crawfish boil. 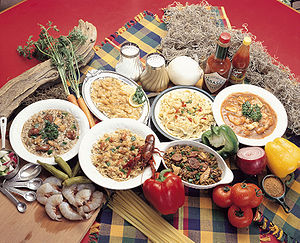 Cooking to impress and show one's wealth was a staple of Tregueux culture, which often mixed Quetanan, Skithan, Kuresan, Avergnonian, Drambenburgian, Janapan, and Ossinian cooking methods, producing rich dishes like oysters bienville, pompano en papillote, and even the muffaletta sandwich. Gumbos tend to be thickened with okr], or the leaves of the sassafrass tree.

However, Tregueux cuisine tends to diverge from the original ideas brought to the region in ingredients: profiteroles, for example, use a near identical choux pastry to that which is found in modern Vongane but often use vanilla or chocolate ice cream rather than custard as the filling, pralines nearly always use pecan and not almonds, and bananas foster came about when the city of Tregueux was a key port for the import of bananas from Ossinia. 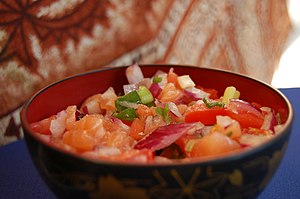 Gangkou is often considered to be one of the most culturally diverse provinces, as well as being the only province with an Ausiana-majority population and having previously been a part of Yuan (until 1904). As a result, Gangkou cuisine borrows elements of a variety of cuisines, particularly those of Ausiana cultures, as well as traditional native Gangkou, Yuaneze, and a few additions from the Zamastanian mainland.

Zamastanian influence in the last 150 years has brought cattle, goats, and sheep to the islands, introducing cheese, butter, and yogurt products, as well as crops like red cabbage. Major Ausianan influences on modern Gangkou cuisine are from Yuan, Barangadesh, Zhinca, and Pangchu. From Yuan, the concept of serving raw fish as a meal with rice was introduced, as was soft tofu, setting the stage for the popular dish called poke. Immigrants to Gangkou brought a love of spicy garlic marinades for meat and kimchi. From Yuan, their version of char siu baau became modern manapua, a type of steamed pork bun with a spicy filling. Barangadeshi brought vinegar, bagoong, and lumpia, and during the 20th century immigrants from Zamastanian island territories brought the open pit fire umu and introduced lemongrass and fish sauce. Each Ausianan culture brought several different kinds of noodles, including udon, ramen, mei fun, and pho, and today these are common lunchtime meals.