The Zian Presidential Mansion, also known as the "President's Palace", the "President's House", and the "Executive Mansion", serves as the official residence of the President of Zamastan. The site was originally the home of the Skithan Imperial Governor of the Zamastan colony and was selected by the first President, Tomias Hapson, as the official residence. The building went through extensive expansions, beginning in 1815. The building was finished in 1837. Every president since Hapson has lived there. Tyler Kordia officially gave the Zian Presidential Mansion its current name in 1939. Facilities that are available to the president include access to the Mansion's staff, medical care, recreation, housekeeping, and security services. The federal government pays for state dinners and other official functions, but the president pays for personal, family, and guest dry cleaning and food.

The modern-day Presidential Mansion complex includes the Executive Residence, North Wing, South Wing (containing the Gaviria Office), the Debois Executive Office Building—the former State Department, which now houses offices for the president's staff, and Saneau House, a guest residence. The Executive Residence is made up of six stories—the Ground Floor, State Floor, Second Floor, and Third Floor, as well as a two-story basement. In 2017, it was ranked second on the Zamastanian Institute of Architects list of "Zamastan's Favorite Architecture", narrowly beaten by the Congressional Hall Capitol Building. 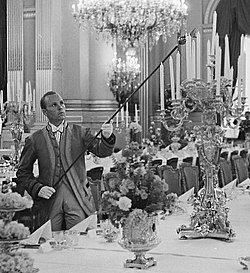 The palace is used for state occasions at court.

Retrieved from "https://iiwiki.us/mediawiki/index.php?title=Zian_Presidential_Mansion&oldid=289561"
Categories:
Hidden categories:
This page was last edited on 22 December 2020, at 05:31.
Privacy policy
About IIWiki
Disclaimers