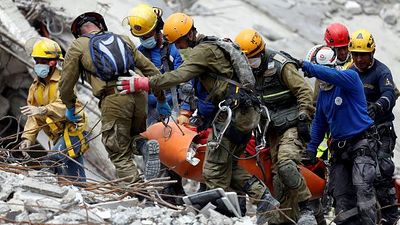 Rescue teams attempt to pull a survivor out of a collapsed building in Kelowna, Zian.

The 2019 Coastal Valley earthquake (also known as the August 2019 Zian earthquake or the Horseshoe Bay Quake) was a massive earthquake which killed nearly 4,300 people and injured nearly 20,000 on 31 August 2019, with a magnitude of 8.3Mw and and a maximum Mercalli Intensity of VIII (Severe). Its epicenter was in Horseshoe Bay, fed by the Olympic Ocean, west of Providence, Northern Isle, Zamastan, and its hypo-center was at a depth of approximately 8.2 km (5.1 mi). It was the worst natural disaster to strike Zamastan since the 1919 Tofino Earthquake, and one of the deadliest natural disasters to hit the continent of Euronia since the 2006 West Chanchajilla Earthquake. The ground motion recorded in the capital of Tofino and the Coastal Valley region to the north was of high frequency, which, along with its occurrence at an hour where many people in urban areas were working indoors, increased the loss of property and human lives.

Hundreds of thousands of people were made homeless with entire towns along the coastal valley flattened, across many districts of the coastal country. Centuries-old buildings were destroyed at World Heritage Sites in Zasi Old Town. Geophysicists and other experts had warned for decades that Zamastan was vulnerable to a deadly earthquake, particularly because of its geology and urbanization. The measures for earthquake prone architecture failed in many cases, leading to thousands of building collapses. The city of Kelowna, Zian, which sits directly on a fault that shifted during the quake, was one of the hardest hit cities.

Continued aftershocks occurred throughout the Coastal Valley at the intervals of 15–20 minutes, with one shock reaching a magnitude of 6.7 on September 1st. The country also had a continued risk of landslides.

The earthquake occurred on August 31st, 2019 at 2:08 pm at a depth of approximately 15 km (9.3 mi) (which is considered shallow and therefore more damaging than quakes that originate deeper in the ground), with its epicenter approximately 83 km (21 mi) west of Providence in the Olympic Ocean, lasting approximately fifty seconds. The earthquake was initially reported as 7.5 Mw by the Zamastan Geological Service (ZGS) before it was quickly upgraded to 8.3 Mw. A second earthquake was somewhat less powerful at 6.6 Mw. It occurred 65 km (40 mi) west of Providence and its seismic focus lay at a depth of 10 km (6.2 mi) below the earth's surface. Over thirty-eight aftershocks of magnitude 4.5 Mw or greater occurred in the day following the initial earthquake, including the one of magnitude 6.8 Mw.

According to the ZGS, the earthquake was caused by a sudden thrust, or release of built-up stress, along the major fault line where the Olympic Plate, carrying the Olympic Ocean, is slowly diving underneath the Western Euronia Plate, carrying much of Euronia. Kelowna, situated on a block of crust approximately 120 km (74 miles) wide and 60 km (37 miles) long, rapidly shifted 3 m (10 ft) to the south in a matter of just 30 seconds.

The risk of a large earthquake was well known beforehand. In 2013, in an interview with seismologist Fin Hammers, The Tofino Times quoted him as saying, "Calculations show that there is sufficient accumulated energy in the Main Frontal Thrust, now to produce an 8 magnitude earthquake. I cannot say when. It may not happen tomorrow, but it could possibly happen sometime this century, or wait longer to produce a much larger one." Some government officials had expressed confidence that an earthquake with the magnitude of the 1919 Tofino Tremor would not occur again.

Zamastan lies towards the southern limit of the diffuse collisional boundary where the Agrimai Plate underthrusts the Catica Plate, occupying the central sector of the Zian arc, nearly one-third of the 1,400 km (870 mi) long West Catican range. Geologically, the Zian Mountains are sub-divided into five tectonic zones from north to south and, east to west and almost parallel to sub-parallel. These five distinct morpho-geotectonic zones are: (1) Valliu Plain, (2) Sub Ziani (Zian Mountains), (3) Lesser Ziani (Forrester Range and mid valleys), (4) Higher Ziani, and (5) Inner Ziani (Catican Tethys). Each of these zones is clearly identified by their morphological, geological, and tectonic features.

The convergence rate between the plates in west central Zamastan is about 45 mm (1.8 in) per year. The location, magnitude, and focal mechanism of the earthquake suggest that it was caused by a slip along the Main Frontal Thrust.

The earthquake's effects were amplified in Kelowna as it sits on the Kelowna Basin, which contains up to 600 m (2,000 ft) of sedimentary rocks, representing the infilling of a lake.

Based on a study published in 2014, of the Main Frontal Thrust, on average a great earthquake occurs every 750 ± 140 and 870 ± 350 years in the coastal Zamastan region. A study from 2017 found a 700-year delay between earthquakes in the region. The study also suggests that because of tectonic stress buildup, the earthquake from 1919 in Tofino and the 2019 quake are connected, following a historic earthquake pattern. A 2016 study on historical great earthquake pairs and cycles found that associated great earthquakes are likely to occur in the West Catica region through the 2020s.

According to the ZGS website, the maximum intensity was VIII (Severe). In most of Kelowna the intensity was VI, as evidenced by the numerous undamaged water towers installed on top of undamaged multi story buildings. Tremors were felt in the neighboring country of Gladysynthia, and a minor, non-damaging tsunami hit the coasts of Baytonia, Caspia, and Rio Palito. Damage was extensive in the Coastal Valley. Shaking was felt in high-rise buildings as far as Jade Harbor.

A series of aftershocks began immediately after the mainshock, at intervals of 15–30 minutes, with one aftershock reaching 6.6Mw within 34 minutes of the initial quake. A major aftershock of magnitude 6.9 Mw occurred on 1 September in the same region at 12:54, with an epicenter located about 17 km (11 mi) west of Providence. The aftershock caused fresh avalanches on Mount Kira and was felt in many places in northern Zamastan, specifically the Northern Isle region. The aftershock caused a landslide on the Coastal Highway, which blocked the section of the road between Providence and Lower Tariel.

A tsunami warning was issued following the quake, prompting evacuations. The tsunami reached a peak height of 4 meters, and caused minimal destruction as compared to the quake. Several marinas and boat launches were destroyed, though the waves never reached farther than 100 meters inland. Water volume inland was lower than a half meter, and velocity was only about 10 km per hour, keeping most objects in its path stationary. A small tsunami also impacted the coast of Gladysynthia near Danaska, but it did not result in any major damage.

The earthquake killed more than 4,300 people in Zamastan and injured nearly three times as many. The urban death toll may have been amplified by the fact that most people were indoors working when the quake hit.

The example of this earthquake shows that loss calculations for hypothetical likely future earthquakes can be reasonably reliable. In 2005, the expected numbers of fatalities due to a hypothetical scenario earthquake near Tofino for M8.1 was published. The fatalities at that time were estimated between 21,000 and 42,000. The M8.3 earthquake of August 31st, 2019, killed about 4,300 people. Because it occurred on a Saturday and so many buildings that collapsed, such as schools and municipal buildings, were empty, it is possible that reduced the death toll.

Thousands of houses were destroyed across many districts of the country, with entire villages flattened, especially those near the epicenter.

The Tofino International Airport serving Tofino was closed immediately after the earthquake, but was re-opened later in the day for relief operations and, later, for some commercial flights. It subsequently shut down operations sporadically due to aftershocks. Kelowna's Kelly Ellis International Airport was closed temporarily to the largest planes for fear of runway damage. During strong aftershocks, the airport opened all boarding-lounge exit doors onto the tarmac, allowing travelers who were waiting post security and immigration to flee to the open spaces of the runway tarmac. Many travelers remained outside as planes were delayed and the airport swelled to capacity. The airport facilities suffered damage and there was no running water or operating toilets for travelers waiting in the airport lounges. Few airport workers were at their posts; most were killed in the earthquake or had to deal with its aftereffects.

All of Zamastan's Western-most ports were briefly shut down after the earthquake, though the ones in Tofino and southwards soon re-opened. Fifteen ports were located in the disaster zone.

45,700 buildings were destroyed and 144,300 were damaged by the quake and subsequently minor tsunami. Three hundred hospitals with 20 beds or more were damaged by the disaster, with 11 being completely destroyed. The earthquake and tsunami created an estimated 24–25 million tons of rubble and debris in Zamastan.

According to the trade department, around 4.4 million households served by Electric Power in northwestern Zamastan were left without electricity.

A 220,000-barrel (35,000 m3)-per-day oil refinery of Blackwater Energy, owned by then-Presidential candidate Cain Blackwater, was set on fire by the quake in Arinals. It was extinguished after two days, injuring six people, and destroying storage tanks. Other oil and natural gas storage facilities halted production due to safety checks and power loss.

Kelowna Air Field of the Zamastanian Armed Forces was struck hard by the quake, resulting in damage to all 18 Z1 fighter jets of the 13th Fighter Training Squadron. 6 of the aircraft were scrapped, while the remaining 12 were slated for repair at a cost of Z$1 billion, exceeding the original cost of the aircraft.

With hundreds of foreign fatalities, leaders across the Coalition of Crown Albatross offered condolences and support for the Zamastanian government and its people. Among the reactions of the global community, President Gideon Boer of the Federation of East Chanchajilla was one of the first to respond, stating "Chanchajillans were deeply saddened to hear of today’s earthquake in Zamastan. We mourn the deaths of the many victims who were taken by this sudden tragedy, and our hearts go out to the grieving survivors. We are ready to provide monetary and medical aid wherever it is needed."

Premiere Seswitch LaFlaunce of Gladysynthia posted on social media stating that he was "wholeheartedly saddened to hear of (the) earthquake off the coast of Zamastan." He also stated that her "thoughts ae with the victims and their families," as well as that "President Bishop and the government" could "count on Gladysynthian assistance". The Premiere convened an emergency cabinet meeting on Saturday morning to discuss the disaster, and the Minister of Foreign Affairs, Hermina Renaga, announced that he would meet with the relief organization GladysynthiaAid to discuss emergency deployment of aid workers. The government of Gladysynthia also worked to establish how many Gladysynthians were affected by the quake, as a minor tsunami reached Danaska.

President Farhen Brooks of Vulkaria stated in a social media post that "The thoughts and prayers of our nation go out to all of the individuals effected by the horrible earthquake that has struck Zamastan. I cannot stress enough how upsetting this is to watch. The Zamastanians are resilient people and I wish them all the best in rebuilding. God Bless."

The Zamastanian government stayed in cooperation with all foreign governments to get accurate and up to date statements on how many foreign nationals were affected by the quake.

Retrieved from "https://iiwiki.us/mediawiki/index.php?title=2019_Coastal_Valley_Earthquake&oldid=258018"
Categories:
Hidden categories:
This page was last edited on 7 October 2020, at 05:54.
Privacy policy
About IIWiki
Disclaimers