Jessiah Albertan Vallotis is a Zamastanian politician and diplomat who served as the 54th Secretary of State of Zamastan, succeeding Avi Tremblan following the election of Atticus Moreau to the presidency on September 22nd, 2020, until his resignation on April 13th, 2022. His position makes him one of the commanding figures in the administrative cabinet. Prior to serving in the Moreau administration, he served as the senator for Pahl's 21st district from 2008 to 2018.

The Sakzi administration in Zamastan, along with the successive Atticus Moreau administration following the conclusion of the 2020 Zamastan presidential election, both promised not to send ground forces into the region. However, President Moreau met with W.E.D.A. leaders in private on September 25th in Vongane, Quetana, to discuss possible intervention covertly to support the rebels, trying to avoid the overt risk of drawing an expanded conflict into Syraranto while also stopping any possible humanitarian disaster from evolving out of control. President Callum MacTavish of Ruskayn had urged Moreau to assemble routine relief supply missions to Syraranto to be airdropped into heavily affected rebel areas. Moreau and Secretary of State Jessiah Vallotis arranged a meeting with North Icadanian Chancellor Gianni Roussilis and Vuswistani President Panagiotakis Nicolalis to use their airspace to fly sorties into Syraranto. From September 30th to October 6th, Zamastanian crews aboard Vuswistani planes flew over Syraranto from North Icadania and dropped over 400,000 tons of supplies; mostly food and medical, into Western Syraranto. 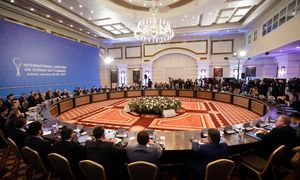 On October 7th, 2020, delegates from regional countries and observer nations gathered in Tyrnatini, Vuswistan, for the Tyrnatini I Peace Talks. The aim of the C.C.A.-backed talks were to find a discernable peace settlement between the Syraranto government and the rebel forces. Civilian casualties had reached over 30,000 dead by October, making the war one of the most devestating modern conflicts for the rate of casualties among civilians. Delegates agreed to suspend trade and diplomatic relations fully with Syraranto, while the C.C.A. suspended Syraranto and Great Epsilon's seats indefinitely or until Tasoulas stepped down from office and ended the military campaign. At this stage, De Yuan's Xi Jingyi decided to end their support of the Tasoulas government at the risk of sanctions. Three days after the Peace Talks in Vuswistan, a gunman linked to Tasoulas' government envoy in East Chanchajilla attempted to assassinate Zamastanian Secretary of Defense Camille Boffrand while in Vilanja. While the assassination attempt failed and Boffrand escaped unharmed, two of his aides were killed.

On October 25th, the Zamastanian Intelligence Service announced two major developments in Syraranto. The first was that the death toll from the conflict had reached 100,000 people: approximately 30,000 government fighters, 60,000 rebel fighters, and over 45,000 civilians had been killed. The second was the infiltration and rise of terrorist and extremist groups in the conflict zone, specifically that of Al-Fijar and remenants of the Malvarian Liberation Front. 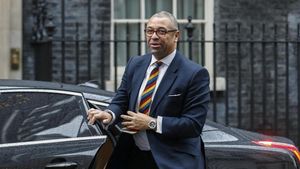 On October 29th, 2020, the pro-secessionist Bettencourt Protests erupted across Mayotte and Aunistria as the independence parties such as Bloc Mayotte and the Separatist Alliance Party seized on the opportunity of Moreau's presidency to further their cause for independence. Moreau, who during the presidential campaign had promised not to endorse secession, prompted the governors of each province (Thomas Braitwhite, MA; Moses Ezekan, AN; Stephanie Mortez, AL) to hold their own referendums. This move, although popular in the provinces seeking independence, caused widespread outrage across the rest of the country. Vallotis tried to convince Moreau to backstep on his endorsement of the governors according to special reports from the Tofino Times and the Jade Tribune, though the President refused. On December 4th, Mayotte overwhelmingly voted to secede from the republic, followed on December 6th by Alutia and Aunistria. Congressional Hall attempted to block their referendums, declaring them unconstitutional, but the Supreme Court of Zamastan intervened and ruled in favor of the provinces in a 7-2 vote on December 12th, with Chief Justice Roosevelt Dunn citing "provincial rights and priviledge" as the reason for upholding the referendums.

The provinces, now headed for fully autonomous governments, remained Zamastanian dependencies for the remainder of the year. Vallotis worked to make sure there were contingency plans and direct state department connections between the provinces and the republic for future cooperation once their independence was secured. On January 1st, 2021, the three provinces formally became independent forming three new nations of Mayotte, Auraine, and Alutiana.