Aurivizh, officially the Aurivizht State (Aurivizht: Riez Aurivizh) is a nation located in Eastern Argis in the Yeetland region. It is bordered by Ebrary in the east, the partially recognised state of Bouenezenn and the Strait of Budoc in the south and Gotneska in the west on the river Shannon. Covering an area of 192,013 km² (74,136 mi²) on the mainland and the island of Byghanenezenn. Aurivizh has a population of 13.5 million, with most of the people living in the southern part of the nation. It is subdivided into 14 Regional States, and it varies from humid continental in the south to a boreal climate in the north. Alivezh is the capital and the largest city, followed by Galivizh and Pulezh.

Aurivizh has long been inhabited, first by neanderthals, before Homo Sapiens settled in 8000 BCE. The first written records originate from around 700 BCE, written by proto-Gelts who had settled in the area. From 200 AD to 832 AD, Aurivizht city-states and kingdoms were the only nations which had resisted occupation by the Yetlandi empire in the area. In 832, the Duchy of Galivizh was formed and united a large part of the Aurivizht city-states under one banner. The Kingdom of Alivezh replaced the duchy in 894 AD, and for a long time dominated Aurivizh, as well as making Christianity its state religion. The Kingdom of Aurivizh-Izel from 1494 is often considered the Aurivizht Peak, with its territorial, extend being the largest of any Aurivizht nation in 1634 AD. After an era of political turmoil, revolts, and wars, Aurivizh-Izel retreated into the core nation behind the Shannon river. King Saliou reformed Aurivizh-Izel into the Kingdom of Aurivizh in 1744, followed by a war conquering Bouenezenn island in its entirety in 1762.

For a long time, the Kingdom stagnated under an absolute monarchy. The absolute monarchy was turned into a constitutional monarchy in 1854 with the foundation of the Council of Advice. However, the Monarchy still held major power, and after an attempt to limit the power of the Council, a revolution overthrew the monarchy in a short civil war, founding the Aurivizht Republic in 1933. The Republic did not last long, as it itself was overthrown in a coup d'etat in 1964 by the Nationalist Party of Turien Rouault. The Republic was replaced by the Aurivizht State, a nationalist authoritarian state. Using irredentist and nationalist claims, it fought a war against Gotneska over the Ghassouned area, as well as a war with Ebrary over Bouenezenn, which ended up dividing the island. In the 21st century, Aurivizh has undertaken economic reform, causing it to become one of the fastest growing economies of Eurth.

Aurivizh is recognised as a developing country with an upper-middle income, having been one of the fastest-growing economies of the 21st century. It is a member of the Assembled Nations. It is often called one of Eurths last Fascist states, with the strong Authoritarian properties playing an effect in it. It has very harsh censorship laws, combined with a bad civil rights record. Religious and cultural minorities are repressed, and Aurivizh still has the death penalty as a legal punishment, though it has not been carried out since 2011.

What today is Aurivizh was first inhabited by Geltic groups around 700 BCE. These Geltic groups, today known as the "Aurivizht Proto-Gelts", are responsible for the majority of Aurivizh's Megalithic sites, of which it has many. These Proto-Gelts eventually settled down, and the first farming communities of Aurivizh were created in the area of modern-day Galivizh.

The first real state was established in 832 CE when king Tivanou of Aurivizh (born-died), also known as the "Tad ar vro" (Father of the Nation) formed the Duchy of Galivizh near the coast. Galivizh took over multiple bordering communes, extending into an area making up a third of the modern-day borders. Tivanou passed away in 856, and with him, his nation went. Galivizh collapsed into multiple smaller states, of which the largest was the Kingdom of Alivezh. During this time, Christianity was introduced into Aurivizh.

By 1300, the situation in Aurivizh has stabilised, and a single nation was once more in control over the majority of the land, the Kingdom of Alivezh. Alivezh quickly proved to be the most important city in Aurivizh, as its location near the sea, and fertile land made it perfect for trade between the Aurivizht nation-states. Alivezh, and its monarchy led by King Budac (born-died), had great aspirations for Alivezh, which, for Budac meant the unification of Aurivizh. Budac would not live to see that dream come true, but his successor's successor, King Baglan, made it come true, and in 1494 the Kingdom of Aurivizh-Izel, the first true Aurivizht nation was formed, with Baglan on its throne. In 1502, the largest church in the nation and the most famous Aurivizht building, Kouent a Sant Meriasek, finished its construction period, which had lasted for almost 200 years.

Aurivizh-Izel looked beyond its borders for territory, moving into neighbouring Aurivizht nations which did not give in to his hegemony, and then into completely different nations of Gelts. Airivizh-Izel assimilated most of them in brutal ways, which often included the torching of entire villages. However, after two hundred years of conquering, Aurivizh-Izel reached its peak, and in 1630 the nation was the largest any Aurivizht nation ever was, almost double the size of the modern nation. Yet, the nation could not stay, and after the death of king Baglan III, large sections of the nation which had been conquered from other Gelts revolted, resulting in Aurivizh-Izel collapsing into the centre nation, just slightly smaller than the modern borders.

Aurivizh-Izel required reforming, which happened. King Saliou (born-died) reformed the kingdom of Aurivizh-Izel into just the kingdom of Aurivizh. He also reconquered the region of Tousaeg in a short war, giving Aurivizh its current borders. From 1744 to 1871 the monarchy reigned supreme. But in 1871, the Council of Advice was established, essentially turning Aurivizh from an absolute into a constitutional monarchy. Aurivizh began its process of industrialisation in 1891, with its first textile company opening in June of that year.

Aurivizh has had a turbulent twentieth century. The main two turning points were the 1943 revolution against the monarchy. The monarchy had become unpopular with the majority of the people, and a democratic union took power in the Council of Advice and turned the entire nation into a pure democracy. The second major event was the 1967 "Great" coup, which saw the democratic government, which had become weak due to factional infighting, being replaced by the Authoritarian government of Turien Rouault (born-1991). Rouault shaped Aurivizh into his vision, a strong, authoritarian state with a strong economy. This came at the expense of civil liberties, and the democratic rights which Aurivizh had enjoyed for a mere 20 years. Between 1977 and 1979, a war between Aurivizh and Ebrary was fought.

Turien Rouault passed away in 1991 and was succeeded by Madenig Moigne. Moigne himself worked to make Aurivizh a more militarized nation, still continuing the strong government Rouault had imagined, but he passed away before his great military dream for Aurivizh was achieved. Moigne was replaced with Tudig Gwernig, the current leader of Aurivizh. Gwernig is, much like his two predecessors, interested in continuing a strong regime for Aurivizh, and has worked to achieve that. Ever since he took power in 2002, he has instigated plans to modernise his nation's economy, moving away from agriculture and moving into manufacturing and mining. Gwernig has also put reforms into infrastructure, modernising the antiquated railways and refurbishing the roads. 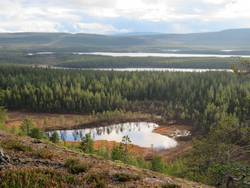 A pine forest in Northern Aurivizh.

An iron mine in northern Aurivizh, near Kêr a Baglan

Aurivizh is categorised as an upper-midle income country with a mixed market economy, categorised by heavy government involvement. It's HDI is 0.813, and median income per capita is $14,890 (ȡ60,332). The Nominal GDP of Aurivizh is $206.4 Billion (ȡ836.3 Billion). For the most part, the Aurivizht economy is reliant on its mining and manufacturing sectors. Especially the mountains in the north are rich with Iron, Magnesium, Tungsten and other rare-earth minerals. It is believed Aurivizh has among the highest iron reserves on Eurth. Off-shore Gas platforms are used in the gas fields south of Aurivizh, both for energy prouction and gas retrieval. Furthermore, Aurivizh has a large manufacturing sector, mainly centred on the refining and usage of the minerals mined. Aurivizh is a large producer of Rolling Stock, both for the national and international rail markets, mainly for Argic nations. Forestry is another large sector of Aurivizh's economy, around 40% of Aurivizh's area is forested.

Besides the heavy industry, agriculture makes up a large part of Aurivizh's anual income. Especially in the south there are many agricultural areas, as the soil is more fertile. Wheat, rapeseed, other oil plants, and sugar beet are common in the south, while cereals like oats and barleys are found further in the north. Domesticated livestock mainly consists of cows and poultry. Fishing is also undertaken in the waters south of Aurivizh, especially salmon is fished for. Aurivizht fruit wine is made in the south.

As Aurivizh's internal market was almost completely closed to foreign investments before the Tudig Gwernig government, it has seen notable growth since the further opening and economic reforms of Gwernig, starting from 2009. Aurivizh's Gross Domestic Product, between 2010 and 2019, was one of the fastest growing GDPs of Eurth, growing 2.4% in 2018. Between 2018 and 2021, the GDP still has faced growth, but at a slower rate compared to the years before it. 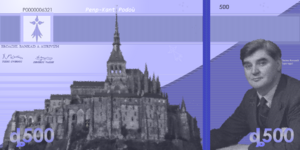 Following the economic reforms of 2009, Aurivizh has opened up further to international investments. Aurivizh itself had already been investing into eastern Bouenezenn island before the reforms, but after the reforms the investments continued on a larger scale. The Pod, the currency of Aurivizh, is worth around a quarter of the International Currency, with $1 being worth ȡ4.052. The port of Alivezh is the main and largest port of Aurivizh, and one of its trading hubs. Aurivizh does not have reduced tariffs with any nation except for Bouenezenn. 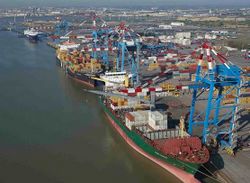 The Port of Alivezh is the largest port of Aurivizh 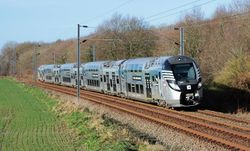 A Double-Decker train on the Galivizh-Alivezh Mainline. The line was upgraded in early 2018 to support higher speeds.

Gourhentioù are the names of the Highways in Aurivizh. The H-30 towards Tousaeg is pictured here.

Aurivizh has 6,730 kilometres of railroad track, with more than half of it being dual track routes. Though there are no per-definition High-Speed high speed lines, Aurivizh has one upgraded Higher-speed route, the Galivizh-Alivezh Mainline, where trains are able to reach more than 220 km/h on a route that it 214 kilometres. The rail network is centred around Alivezh, with branches going to other large cities and both the Gotneskan and Ebrarian borders. A bridge connects mainland Aurivizh to the country of Bouenezenn, crossing the strait of Budoc.

The total road network extends more than 350,000 kilometres, but there are only 8,032 kilometres of highways, or Gourhentioù. The highway network is once again centred around Alivezh, but branches further than the rail network. Highways are called H-Roads, and limited access roads are called N-roads. There are orbital higways around many large cities, together with a few highways going international, such as the H-2 connecting onto an Ebrarian highway, the H-8 onto a Gotneskan one and the H-17 crossing the strait of Budoc and connecting onto the H-3 of Bouenezenn. Many rural roads are in disrepair, with the Aurivizht government having pledged to repair them before 2030.

Aurivizh's largest port is the Port of Alivezh, serving both cargo and passengers.

Most of Aurivizh's energy comes from fossile sources, especially natural gas and coal. There is one nuclear power plant in operation, the Pulezh Nuclear Power Station, and a hydroelectric dam on the river Tathuned. 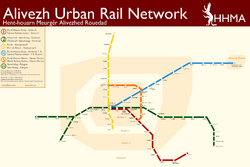 The Alivezh Urban Rail Network is the largest mass-transit system in Aurivizh, covering the entire metropolitan area of Alivezh