Yuropa, officially the Himaya of Yuropa, natively known as Yuropa Apapoba, is a nation in the west of Europa on Eurth. It rose through the outstanding administrative and organisational skills of the Yuropa people. The Europa Empire was the most politically important state in the region from the early 4th Century to the late 9th Century, holding power not only over most of the other kingdoms in Yuropaland, but also over nearby nations.

Native language: Yuropa (Europa), and Apapoba from apapo (federation) and oba (empire).Cite error: Invalid <ref> tag; refs with no name must have content

Located in Northern Azania, this region has been Yuropa's backyard throughout history. The first states were formed around the broad and fertile Drift Valley, enclosed by great mountains. It was inhabited by a band of primitive people, who were distant relatives to the Wajokans. There was an advanced agricultural system. The Drift Valley is considered to be the birthplace of humanity. The capital is Centridge City.

Yuropa has only recently been given the independence they desire. However, most of these countries have just replaced one imperial oppressor with a national one.[1] 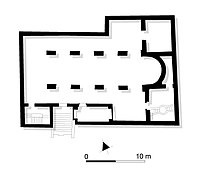 Ground plan of the “Old Church” in Tarshish, founded in the mid-5th century.

Pretty much the exact same. However, the use of a modified version of Hadza and the expansion of their history into modern day through the rise of the Yuropa Himaya in the early modern period, and it's dissolution in the mid 1900s. Yuropa would also be well known for selling entire villages of people from their tributaries in Mandenica and Namica to aspiring colonies in the New Wurld.[1]

The key to Yuropa politics is a strong military and centralized government. The Yuropa Empire developed a highly sophisticated political structure to govern its subnational states. The influence of an aggressive Yuropa culture is exemplified in the standards placed on the Emperor and the roles of his council. While the Emperor is the supreme authority, he is not without checks on his power.

The population is concentrated in metropolitan Centridge City. With imperial expansion, Yuropa is divided into regions to better manage its vast holdings within and outside Yuropaland. It is divided into four states, defined by relation to the core of the empire. These states are Centridge City, southern Yuropaland, the Drift Valley, and Awonabule.

One version of the Yuropan creation myth explains that long, long ago, when the Eurth was new, the great river goddess Yuropa sent her daughter Arabambi to marry a handsome Eurth chief in the Land of Shinar. At first, Arabambi was happy, but soon she started to long for the cool shadows of her motherland. So her husband asked Crocodile and Hippopotamus to bring Arabambi a sackful of Night. As they carried it back, the animals heard strange noises coming from the sack, and curiosity finally got the better of them.

The Yuropans are a very expressive people who celebrate their cultural events with colourful festivals and celebrations.