The Tricontinental Defence Treaty Organisation (TRIDENT), is an intergovernmental military alliance between select Argic, Alharun, Thalassan and Marenesian nations. The alliance is based on the Tricontentental Defence Treaty that was signed on 25 January 2018.[1] TRIDENT constitutes a system of collective defence whereby its independent member states agree to mutual defence in response to an attack by any external party. TRIDENT maintains no central headquarters; division headquarters are located in Manille (Iverica), Bromwich (Gallambria), Ferrefaaierhafen (Variota). Instead, the TRIDENT leadership convenes via a remote link or at the Manille Headquarters.

The organisation was founded on the principles of (1) Deterring potential imperialism by Europan great powers, (2) maintaining mutual security against rogue states or extremist groups, (3) mutual security of each member's sovreignty against foreign conquest or annexation. Based on these principles, first-generation members of TRIDENT (2017) were typically described as democratic with a free market, and with a proactive outlook on regional security.

Membership is strictly limited, requiring that no current member oppose the entry of a state that has officially expressed interest. Consensus voting is almost universally applied to regulations regarding membership. Originally membership was limited to nations with sovereign territory in the "Tricontinental Area" of Argis, Alharu, Thalassa. However, in 2018, the Treaty Council created a special dispensation for states in the continent of Marenesia, allowing the states of Gallambria and Salvia to enter the organisation as full members on 2018 and 2020 respectively.

Member states are expected to abide by the terms of the Tricontinental Treaty.[1] A members recognised soverign area is protected by Article 5 of the Treaty, a mutual defence clause that obligates members to come to the military aid of another member which is facing the threat of foreign annexation or conquest.

During the Marenesia Conference[2], members of the Treaty Council discussed shifting trends in regional security and the direction of the organisation as it moved into a new decade. Among the motions was a proposal to establish an associate role to the treaty. This role, dubbed "Partner(s) for Peace" (PFP) was to include states with similar interests, ethical frameworks, and geostrategic objectives but where for one reason or another, unable to committ to a military alliance.

At the newly opened, General Sir Sebastian Martin-Powell Theatre at the Gallambrian Command and Staff College in Bromwich, Coronel Jean-Eric Guy of the Exersito Iverica described the PFP role:

A Partner for Peace is indeed similar to an observer status. However, unlike a regular observer—say of ATARA or other IGOs, a Partner with TRIDENT must be a sovereign state which has aligned interests and aligned foreign or defence policies. The council expressed its understanding that some states may be unable to join TRIDENT formally, because of many political reasons. In effect, the PFP would grant them a channel to cooperate with the treaty without serious defensive commitments."

As of 2020, partners for peace include the Greater Holy Empire of Tagmatium and the Kingdom of Seylos. In 2022, the Second Kingdom of Gotneska applied for PFP status[3]. The application was accepted by the Tricontinental Treaty Council in the weeks following. The Goutian application had been prefaced by increased Haru presence in the North Adlantic and Geltic. Following the deployment of Haru Ballistic Missile submarines in the region, Goutian Navy units participated in Joint Exercise Fian in the Geltic Sea. Public concerns over the Haru actions have been cited by the Treaty Council as a key factor in the partner status of Gotneska.

The organisation conducted its first military intervention in the Verde Sea, specifically within the northern and southern Altarian Straits to prevent the increase in military disparity in the connected Mediargic Sea.

The Verde Blockade was a joint operation to blockade the Verde Sea from penetration by Ahranaian Naval forces. The operation was justified under the international protest against the expansion of Ahranaian military forces in the connected Mediargic Sea, specifically in the region of Xara, which had been annexed by Ahranaian forces much to the protest of Ahrana's northern neighbour, the United States of Prymont. When protests and warnings from TRIDENT member states were ignored, the blockade was executed by a TRIDENT task force and forced the Ahranaians to halt their fleet. In response, the Ahranaian government enlisted the aid of the now rouge state of Asgeirria resulting in what some deemed to be a false flag operation.

This conflict was resolved later during peace agreements, to the satisfaction of TRIDENT and Ahranaian parties. TRIDENT officials from Iverica & Gallambria co-authored the Xara Accords[4], a treaty to resolve the heated situation of Ahranaian naval expansion. The Accords presented a sustainable solution by proposing a balance of strength in the Mediargic Sea and specifying the conduct necessary for forces to maintain the peaceful posture between both parties. 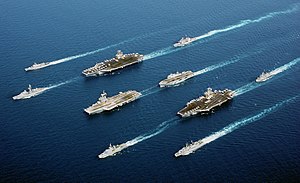 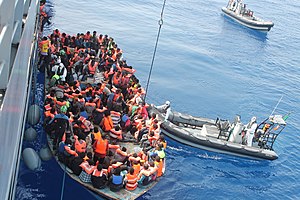 Cussian Refugees being taken aboard a ship of Task Force Tagmatium.

During the 2019 Haru Invasion of Beautancus, the belligerent Haru forces prosecuted and incarcerated Cussian Christians, many of which were Gerenian Christians. A joint operation led by the Republic of Iverica resulted in the relief and evacuation of an estimated 300,000 (?) Cussian Christians and Haru conscessions to open its occupied territories to foreign observation. The event is partially credited by spokespersons of the treaty organisation for contributing to the eventual geopolitical alignment of existing TRIDENT members with the governements of Salvia, Seylos, and Tagmatium. It is also a direct cause of the formation of several Cussian diaspora groups, including 2 sovereign diaspora states—notably the Cussian Protectorate of Monarch Island, or "New Beautancus"[6] and the state of "New Cussia" in Seylos.

Though the criticism on Haru actions had been noted as early as July, 2019 by Orionese media service Roiters [7], TRIDENT did not ackowledge or address the issues until prompted by the Iverican Executive Ministry.

On October 20th, 2019, the Iverican Foreign Minister Desdemona Tomas-Morra issued an ultimatum to the Haru government declaring that Cussian sovereignty should be opened to international observers and humanitarian efforts in the face of human rights abuse allegations. The Haru government were reportedly incarcerating Cussians without fair trial and enforcing mandatory "re-education" of Cussian Christians. The state-owned Imperium News Night broadcast stated in a report that:[8]

"Executed with compassion and the promise of resettlement, it [refugee camp] can facilitate shelter, social services and a quick transition. Done badly, when anti-refugee sentiment is high, a military base can become prison-like – a place where refugees are confined behind barbed wire, with unknown release dates. The Eighth Circle continues to circulate that any individual identified as a Christian will be housed there, if but temporarily and apart of the mass deportation of this religious minority to Arhomaneian holdings."

The next day, on October 21st, the Haru government complied, responding and opening channels with the international community. However, relations with the Kingdom of Gallambria detriorated during these proceedings and the Haru cut ties with the Gallambrian state. Negotiations were then conducted primarily between Iverican Foreign Minister Desdemona Tomas-Morra and a representative of the Haru government. Nevertheless, the Haru response permitted aid workers, observers, and military personnel acting in a refugee-relief capacity to enter the annexed territory of Beautancus through the port of Ulusk.[9]

Prior to discussions of the ultimatum, The Iverican Executive Ministry used TRIDENT channels to rally a coaltion of nations named "The Cussian Humanitarian Coalition" (CHC). The CHC had the goal of carrying out "Operation Deliverance" a humanitarian mission conducted jointly by cooperating government, military, and private participants. The operation's goal was to evacuate as many of Beatancus' Christian population (numbering approx. 911,900 Cussian citizens). The operation is recognised as a TRIDENT-led operation, sanctioned by Secretary General Ferran Arnau Macharius. Coalition members participating the operation include: Gallambria, Iverica, Salvia, Seylos, Tagmatium, and Variota. Of the 6 states in the coalition, 3 were TRIDENT member states with the remaining three eventually becoming aligned with TRIDENT in 2020.

Operation Deliverance is credited for being the single largest exodus event since Iberic Diaspora's Gran Viatge and the largest coordinated humanitarian effort in terms of aided refugees.

The organisation has occasionally been criticised for percieved elitism demonstrated by its resistance towards admitting new member states. Other New Wurld nations that had expressed an interest joining the organisation reported that their attempts at reaching out to the organisation were not taken seriously by the Treaty Council. TRIDENT spokespersons have never directly engaged related questions, typically dismissing such criticisms. In one interview, Secretary General Ferran Arnau Macharius mentioned that TRIDENT's responsiveness to critical flashpoints and issues was hinged on keeping it as a "lean organisation", unhindered by the compounding of many members' social or diplomatic conflicts.

Pundits and online discussion on popular domains like Wittier, Accord, and State of Nations sometimes refer to TRIDENT as an imperialistic organisation or as oppressive in a multitude of undetermined ways. Thus far, no media narrative has been able to provide a single concrete instance of the organisation's antagonism in glubal events.