The North Adlantic Union (NAU) is a political and economic union of 10 member states that is primarily located in Southeast Argis. The NAU has a total geographic area of 326,897 sq km and an estimated population of around 60 million people. The NAU currently has a single market between member states, though full freedom of movement has not been fully realized due to the effects of the Sentist War and displaced populations.

Since the first settling of Ceris by Great Anglia and Geltic descendant peoples in the early 1600s, there has always been a unique connection between Ceris and Seylos. From that point onward, the populations had begun to mix extensively in the center of the island, creating an offshoot culture of Anglian and Dolch, known as the Ceriser. Constant struggles between its own people, as well as the constant Dolchlander and Seylosian presence, gave rise to the first concepts of unifying Ceris.

The first attempt at unifying Ceris in a large scale was by the Hodrean Kingdom, which was founded in 1694, after several minor Ceriser states joined together to form the country. Over the course of the next half century the Hodreans made significant inroads both diplomatically and militarily in unifying the disparate states of Ceris. By the mid 1700s, all of Ceris except the east was under the control of the Hodrean Kingdom. For the next two hundred years the state would stand, with occasional border conflicts in the east with states protected by Seylos and engaging in frequent naval combat against Dolch raiders.

By the mid 1940s, the Hodrean Kingdom was experiencing decline and had become internally unstable. At the same time, the monarchy of Seylos had been removed in a coup and replaced with the Seylosian Mandate, which eyed the island for itself. After securing nearby Eire and Galahinda, the Mandate declared war on the Hodrean Kingdom and invaded the island. By 1948 the Hodrean Kingdom had collapsed and the entire island of Ceris was occupied by the Mandate. This would be the first time Ceris and Seylos would be fully unified under one government. However this state of affairs would not last long as with the conclusion of the Great Alharun War the Kingdom of Seylos was restored and all Seylosian forces would be pulled out of Ceris, effectively releasing the Hodrean Kingdom into freedom again. With no military resources, the Kingdom quickly collapsed into civil wars splitting up the island amongst the various states pre-Sentist War

In 2019, this Sentists began their attacks across the entire island. While the most violent view of Sentism focused on war and population control, the southern Sentist faction has hoped to acheive a unification of Ceris under the Sentist banner. However another unification movement had sprung up against the Sentists. The Ceris Coalition was an ad-hoc group of nations formed together to fight back the Sentist tide where the first talks reagarding a larger organization for security began. By the closing months of the Sentist War Seylos, and several eastern Ceris states began talks of a union. These nations included two large Ceriser majority states. Just weeks before the capture of the High Priest, the Treaty of Selbourne was signed formally bringing the North Adlantic Union into existence.

In April of 2021, Seylos engaged in a stand-off with Haruspex over the island of Corinium, which is considered a major stepping stone from Europa to Argis. Unwilling to allow the entire island to fall into Haru hands, Seylos dispatched forces, also supported by Iverican naval assets, to arrive at the same time as a massive Haru task force. What followed was a partition of the island between North Korinon and the Republic of Corinium. Korinon was made a protectorate of Haruspex, while Corinium was offered membership into the NAU.

As of 2021 the population of the NAU numbered 60,858,000. Population growth is variable between the states, and official immigration numbers have been difficult to tabulate following the Sentist War. The birth rate of the NAU is estimated to be 11 per 1000, which can be split more deeply between the member states. Both Egris and Ostros have a birth rate around 16 per 1000 and Seylos experiences around 9 per 1000.

Immigration into the NAU has been massive after the end of the Sentist War, with estimates up to half a million individuals fleeing central Ceris into NAU held territories. Countries such as Seylos or more eastern Anglian states have experienced varying degrees of international immigration from outside the islands due to their economic stability.

Seylos also posseses territories outside of the mainland and Ceris. These territories include Llalta, and Kaseka. On top of this the Republic of Corinium in the far north exists at the edge of the Europan continental shelf. 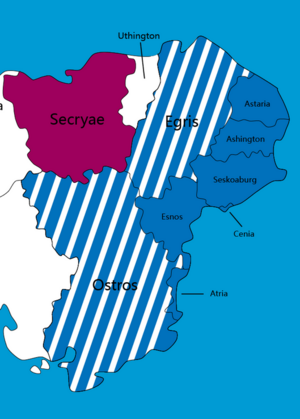 A view of NAU territory in Ceris (Temporary). 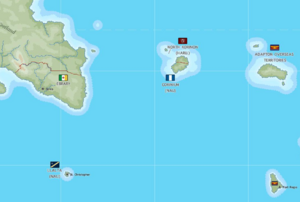 A view of Corinium and Llalta (Temporary).