San Giorgio, officially known as the Republic of San Giorgio, is a sovereign state in Marenesia on Eurth. Its closest neighbouring country is is San Jorge in the east. Sabato is the capital city. San Giorgio is approximately 7,975.25 km2 (3,079.26 sq mi) in size, without the territorial waters. The island is home to $number inhabitants.

The country of San Giorgio was named after Saint George. Also known as Joris of Lukia, Geórgios (Laimaic: Γεώργιος), or Georgius (East-Aroman). According to oral tradition, he was a Lysian soldier in the Aroman army of the 4th century CE. As an early follower of Christianity, he was ordered to reject his religious beliefs. When George refused to do so, he was sentenced to death. Because of his inextinguishable faith, Saint George went on to become one of the most revered Christian saints, especially in military circles.

The actual name “George” comes from γεωργός (geōrgós). This means “earth worker” or “farmer”. It is a combination of γῆ (gê, “earth”) and ἔργον (érgon, “work”). This name was evidently quite common in the rural areas of Occidental antiquity. 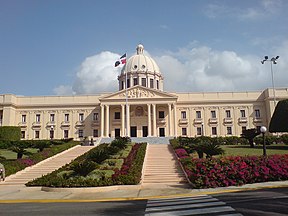 The National Palace in Sabato.

Every 5 years there is a general election for the Presidency. At the time of the country's foundation, there were no term limits. However, in the 1960s a two-term term limit was established.

(WIP. List of presidents, as hinted elsewhere. Must have elections every 5 years. Must also count the correct number of members from each political family. Include D'Aprile who didn't finish her second term. After running the maths, this proposal seems to fit the proposed lore. San Giorgio, although calls itself a republic, is more-so the stomping grounds of the Barbato, Mediuci, and Salvadori houses. The people themselves are well treated under the pretence that healthy and content employees are better than the sick and dying.)

Of the 19 elections and 13 presidencies, 12 of them have come from only 3 families: the House of Barbato (5 presidents), the House of Mediuci (4), and the House of Salvadori (3). The current president, Celso Salvadori, was publicly tutored under Alvise Barbato who was the 10th president of San Giorgio and now Celso Salvadori's own Vice President. San Giorgio's only king, Andrea the First, was from both the Houses of Mediuci and Odell via his father and mother, respectfully. The only president not to come from one of the three presidential dynasties was Diana D'Aprile the 9th President of San Giorgio who held office for 9 years, forgoing her final year in office due to the death of her husband.