Great Anglia, or formally the Kingdom of Great Anglia, is a country largely located on the Anglian peninsula in Western Europa (continent) on Eurth. It is bordered by Adaptus to the north and Suverina to the east. Great Anglia lies on the coast of both the Ram Sea and the Amnalos Sea, as well as the Adlantic Ocean. Great Anglia is a monarchy, with its capital in the city of Godstone. King Creighton III reigns as monarch since 1997.

The name Anglia likely came from the Proto-Argic-Europan root *h₂enǵʰ- ("narrow"), meaning here "the Narrow [Water]", in reference to Widdeby Sound, the long inlet which runs between the Anglian isthmus and the Amnalos Sea. The root would be *angh- ("tight"). There is also a theory that Anglia meant "hook" (as in: angling for fish), in reference to the shape of the peninsula. It is also possible that the Anglians may have been called such because they were a fishing people or were originally descended from such.

Widdeby Sound roughly divides the country in half. 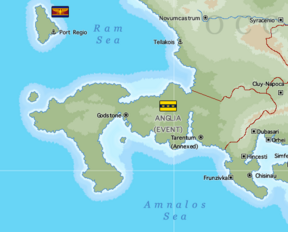 Great Anglia is a peninsula, bordered by the Ram Sea to the north, the Adlantic Ocean to the west and the Amnalos Sea to the south. Its land borders consist of Suverina to the east and Adaptus to the north. Great Anglia's border with Suverina is roughly delineated by the ($MOUNTAINS), save for the Suverin possession of Cluy-Napoca, which lies on the Anglian side of the same mountain range. Great Anglia's border with Adaptus is altogether less defined, with a portion of the border comprising a straight line from the eastern Anglian highlands to the Ram Sea coast.

Great Anglia is roughly divided in half by Widdeby Sound, a long inlet which separates the peninsula of Anglia-proper from the eastern Anglian regions. West of the Sound, the landscape of Anglia is very flat, with the tallest hill on the peninsula being Hybarrow, standing at 368 metres (1207 feet) above sea level. The eastern regions, however, have a far greater variation in height, roughly sloping from Tarentum in the southwest to the highest points of the ($MOUNTAINS).

(WIP. Links with !Alexandrian and Aroman Empires? Did the area have a different foreign name? What happens during the Aroman disintegration?)

Anglia as an independent power has existed for almost a thousand years. After the collapse of the Aroman Empire in $year, a power vacuum led to several independent duchies and petty kingdoms to arise and vie for power. The former Aroman province of $InsertAromanName suffered from extreme instability for decades and suffered one of the few instances in Eurth history of a “reverse colonization” by peoples from Argis.

Around 970 CE the Geltic peoples from Northern Argis started launching a series of raids around the Occidental region and, finding the Anglian province especially vulnerable, focused much of their efforts on it. By 990 CE one especially aggressive Geltic lord by the name Arthfael Bricius ($birth-997) launched an ambitious invasion of the country still too fragmented to fully respond. He gained multiple alliances throughout the peninsula and managed to unify the province under one feudal nation. With him, thousands of Geltic descents followed, settling in the southern peninsula of the $ProvinceName province and establishing a Geltic presence for hundreds of years, each of these tribes claiming separate pieces for themselves.

However, this new kingdom was not to last for long as Arthfael Bricius died in 997 which resulted in a fracture. Now the Geltic minority were on the losing side. The ambitious Anglian Duke Godric Ceolmund (958-1049) launched his own campaign by claiming most of Anglia for himself and putting the southern peninsula under siege. By year 999 peace talks began with the original Geltic invaders, Anglia knowing their resistance would prove in vain, bent the knee to a new ruler. King Godric was crowned the same year and ruled for the next fifty years until dying of old age at 91 years old. The foundation for the kingdom he created held firm and would not collapse after his death, solidifying the Kingdom of Anglia in Europa.

In 1534 Duke Harold of $DukedomName ($birth-$death) in southern Anglia raised protest to a series of laws curtailing not only the powers of the nobility but also the Geltic minorities that very much still existed five hundred years after their initial arrival. The ruling monarch King Albin of Anglia ($birth-$death) reacted harshly by declaring Duke Harold an outlaw for betraying the crown. This declaration initiated the beginning of the Anglian Civil War (1534-1543).

Early in the conflict, Duke Harold achieved a series of startling victories against the Anglian royal soldiers. These early victories prompted dozens of Anglian noble lords and dukes to abandon the royal camp and switch sides by joining Harold's side in the conflict. Not soon after the first attack, the Geltic lands in Anglia also pledged their support to Harold as the true ruler of Anglia. The bloody civil war continued to grind on for another six years.

In 1540 the tide began to turn against the beleaguered rebels. King Albin sensing his new upper hand demanded as a peace offer not only the total submission from his rebelious nobility but also the complete annihilation of the peoples who had dared to rebel against the crown.

The rebels began to discuss amongst themselves on how to best survive their threatened destruction when several cities in their northernmost holdings were put to the sword by the Anglian armies. The decision was made to flee, as they could no longer hold off the overwhelming might of the Anglian forces. Over the next year, in 1541 ships were constructed in haste to begin the mass migration. The Geltic people of Anglia knew of free lands near the Dolch Sea to the southeast of Argis that would be suitable for them to flee to. With their courses set, dozens of ships made the first journey to the island to be known as Seylos. As the Anglians closed in on their remaining port settlements by the end of 1543, the last rebel ships set sail carrying as many people with them to the fabled island as they could. Those that remained were given no quarter by the advancing Anglians.

(WIP. In early 2021 begin a series of wars against its neighbours, a conflict known as the 2021 Anglian War.)

Great Anglia is a unitary state under a constitutional monarchy. King Creighton III of the House of Odell is the monarch and head of state. However, the monarch takes little direct part in governing the country and doesn't make any political decisions. The monarch lacks any formal political power. Legislative power is vested in the bicameral Parliament of Great Anglia, made up of the House of Commons and the House of Lords. The head of government is the prime minister (currently Spencer Green) who selects all the other ministers. During the 21st century, Anglian foreign policy has adopted arevisionist policy of imperialism and militarism. The international 'face' of Great Anglia is the Foreign Minister Sir Algernon Edgeyton.

Anglia is one of the richest countries in Occidental Europa in terms of GDP (gross domestic product) per capita. A high standard of living is expected by its citizens. Anglia is an export-oriented mixed economy, and one of the largest arms exporters in the wurld. The largest trade flows are with Suverina, Adaptus, Tagmatium, Haruspex, and Bashan.

(WIP. What does it make and sell? Who are the trade partners? Currency is the Anglian Nomisma, related to Tagmatine Nomisma.)

Great Anglia shares strong cultural and historic ties with its Occidental neighbours Suverina and Adaptus. The Anglians speak a Peninsular Geltic language known as Anglish. Anglish was spoken throughout the peninsula, as well as islands in Argis, Marenesia and Alharu.

(WIP. Anything in particular to describe?)

Retrieved from "https://iiwiki.us/mediawiki/index.php?title=Great_Anglia&oldid=402533"
Categories:
Hidden categories:
This page was last edited on 18 September 2021, at 18:14.
Privacy policy
About IIWiki
Disclaimers