The Cashar Rally (sometimes the Cashar Challenge; formerly known as the Sao Preste–Cashar Rally) is an annual charity rally raid. The first edition in 1987 drove from Sao Preste, Lusotropia to Pavat, Cashar. Since the 2000s, races have also started from Limonaia, Variota, Fulgistan and Prymont. The rally is open to both amateur and professional participants, with non-professional drivers making up making the bulk of participants.

The race is an off-road endurance event. The terrain that the competitors traverse is much tougher than that used in conventional rallying, and the vehicles used are true off-road vehicles rather than modified on-road vehicles. Most of the competitive special sections are off-road, crossing dunes, mud, camel grass, rocks, and erg among others. The distances of each stage covered vary from short distances up to 800–900 kilometres (500–560 mi) per day.

There are no set routes. Participants have to complete daily stages from the departure to Pavat, Cashar. The race is not timed, but rather points are awarded for completing daily stages within a certain time. However, teams who fail to complete a stage are still in the race. Cars aren't required to pass the finish line, only participants. This means a team can continue their race in another vehicle.

During the first decade of the race (1987-1997), the rally followed a route from Sao Preste to Pavat. By the late 1990s, several teams complained that the route was becoming too easy. The organisation looked into alternative departures and made arrangements with several governments and motorsport associations and federations.

In the 2000s, the routes become more diverse. The distance was doubled by departing from Limonaia. Other deals included East-Alharun nations, turning the rally into a transcontinental race. The 2009 start in Prymont in Argis made the rally into an intercontinental event.

Locals assist a participant with replacing a flat tire.

There are no restrictions on the vehicles or individuals that can enter. In 2020 the Moxie class was added for classic cars and oldtimers, but these don't compete in the races. The race is for both four-wheel vehicles (buggies, cars and trucks) and motorcycles. The main categories are: 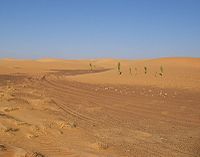 Tire tracks in the Alharun desert.

During the 1994 race, a car killed three Cashari when the vehicle collided with their horse cart. The late-night accident prompted the organisation to shorten distances. This would prevent driving close to sunset or after nightfall. Unfortunately, this didn't prevent vehicles from continuing to hit and kill roaming livestock. The effect on ecology and is also opposed, leaving deep tire tracks, loose parts and rubbish along the route. Several NGOs described the race is: “An obscene, neocolonial show of wealth and waste.” Some Alharun residents along the race's route complained about receiving little compensation. Drivers would remain in their campsite, limiting their support for local economies by spending cash on local goods or services.