Kotowari (Ramil: கோட்டோவரி or Kōṭṭōvari (Kelugu: కోటవారి)), officially the People's Republic of Kotowari is a country in Oriental Europa on Eurth. Bounded by the Jasmine Sea to the north, the Rosario Sea to the west and the Menelassar Bay as well as Muladic Inland Sea to the south, it shares land borders with Tamurin to the south-east and Mahana to the south-west. It is also within the vicinity of San Ba across the Jasmine Sea.

Historically existing in the form of multiple kingdoms - including the powerful Southern Shakyan Principalities, Kotowari united in the late 17th century following the Kotowari War of Unification, The Kingdom of Kotowari was established officially, following the war, in 1677 under the rule of the Aparnan Dynasty. In 1943, Kotowari became the People's Republic of Kotowari after Queen Leyani II handed power to a parliamentary system from the monarchy, with the royal family being completely dissolved by 1983. Since 1943, Kotowari has been a democracy led by a President, managed by a Prime Minister, and governed by a unitary parliamentary constitutional republic based on the Westminster system.

They are a major power in eastern Europa and arguably Orient's biggest power following Orioni. They are a member of a number of international organisations such as the Assembled Nations, Entente of Oriental States and the Oriental Association for Regional Cooperation.

The name Kotowari is of Shakyan origin, it stems from original city of Kadofarikh Puri - one of the original eighteen principality city-states named after the title of a Pre-reformed Juruvanic anthropomorphic diety. "Kadoft-Arikht", means Amorphous Skull. The "Kadofarikh" diety was the shapeshifting frog god of chaos, change, and adaptability. The world evolved over the course of history, and according to multiple reliable sources the name 'Kotowari' first appeared in the days of the Madurai Principality of the 13th century.

Kotowari is located in Oriental Europa,entirely in the Northern Hemisphere at the northern-most point of the Menelassar Bay facing the Jasmine Sea to the north. It borders Tamurin to it's south-west and Mahana to it's south-east, with San Ba just across the Jasmine Sea. Despite being well-known for it's flat fertile lands, mountains run across it's borders with both of it's neighbours, notably the Outer Samripes on the border to Mahana.

The Kaṭaṟkarai (coast) facing west is lush and incredibly fertile, being the sole reason for the large concentration of urban areas along the coast. It also is home to fertile valleys and rivers that run into the Periya Eri (Great Lake) in central Kotowari. There is also areas of large flatlands, suceptible to the Narope Rains which hit the region once per year. The remainder of the wests natural beauty comes from it's lush temperate forests.

Kotowari is predominantly fertile flatlands, however on both of it's southern borders, with Tamurin and Mahana it has a small mountainous area. The highest point is the Mattapunda Peak, part of the Outer Samripes, at 3,844m. The second highest point is on the border between Kotowari and Tamurin, with the Sankarandampalayam Peak at 2,993m. The Kōveṇṭrī Highlands in northern Kotowari also reaches heights up to 2,500m.

A hugely biodiverse country, Kotowari is home to a variety of animal species.

Due to the nation's varied geography and climates, Kotowari is believed to be the home of around 28,398 total animal and plant species, with around 6,190 of those being endemic to the region. It is one of the few megadiverse nations on Eurth.

Kotowari is a habitat for 8.9% of all mammal species, 14.3% of bird species, 8.9% of reptile species, 6.6% of amphibian species, 13% of fish species, and 6.3% of all flowering plant species. Almost three quarters of all the plant species in Kotowari are endemic.

Kotowari also is known for its large area of forest coverage, 68,348 km2 (26,389 sq mi) of the countries total area being forested. The majority of this area is covered by temperate forest, however tropical moist forest can be found in some areas in western Kotowari as well as temperate coniferous forest found in the Outer Samripes in the south.

Kotowari is also home to a wide range of animal species, including 181 IUCN-designated threatened animal species. Some of the most well-known animals include the national animal, the Oriental Elephant, the national aquatic animal the Nupasha river dolphin, the Koto Tiger and the Peacock. Some of Kotowari's critically endangered animals include the gharial, a type of crocodile with a long snout, and the Great Oriental bustard, due to extirpation from its former range by human inhabitants. The pervasive and ecologically devastating human encroachment of recent decades has critically endangered Kotowaran wildlife. Due to this, Kotowari signed the Animal Protection Act in 1957, opening over 50 individual wildlife parks, sanctuaries and marine sites for the protection of species.

A rough early map of the Jasmine Sea City States, 908.

City states along the Jasmine Sea began to flourish after the collapse of the Shakyan Principalities in around the 6th century CE. They achieved great riches and status through the trade of rich spices and natural gold into the Pearl Road, which in return they were given other resources, knowledge and even at points slaves.[1] On top of spices and gold, Kotowari was the main source of exporting silk. This was mostly through the modern day city of Kakarla, on the inner Jamine Sea.

At the height of the Jasmine Sea City State period there was up to 15 city and port states along the Jasmine Sea, who were self-governed and traded separately from each other along the Pearl Road.

The Lushanthan Empire was one of the first major empires in Kotowari, beginning in the town of Lushantha, modern day Yeluru Region. It began to expand quickly and by the late 1000s was a regional power, owning a majority of what is present day Kotowari as well as northern parts of Tamurin as well as some islands in the Jasmine Sea. It was in 1109 that it was pronounced an "Empire" with it's holding of an enclave in the peninsula north of Kotowari. The empire was run in a system called the "Six Tables" which in essence was six councils elected by the Emperor which would make decisions for the empire. All six of the major cities at the time had a table, Kiḻakkin (Kotowari City), Bankra, Kenil, Feni, Jashore and Muladi. Quickly the Lushanthan Empire became a regional power in the Orient, taking over from the Jasmine Sea City States and becoming an important connector in the Pearl Road, along the Menelassar as well as Jasmine Sea.

The "Māperum Parliamentary Building", built in the 1950s, serves as the seat of government in Kotowari.

The government of Kotowari is overseen by the cabinet, which is headed by the Prime-Minister of Kotowari. The tenure of a government in Kotowari is five years. The Civil Service assists the cabinet in running Kotowari's government. Recruitment into the Civil Service is by public examination. The President of Kotowari is the ceremonial Head of State and the powers held by the Head of State include signing bills passed by parliament and making them law. The President is elected by the parliament at the tenure every five years. The President also serves as Supreme Commander of the Kotowari Armed Forces and the chancellor of all universities.

The Supreme Court of Kotowari is the highest form of court in the land, followed by the High Court and Appellate Divisions. The head of judiciary is the Chief Justice of Kotowari.

Kotowari's legal system is based on common law and its principal source of laws are acts of Parliament. The Parliament is made up of 350 members, with tight coalitions. The Kotowari Ramillian Party make up the majority of the seats in most elections, being the most popular party over the last fifty years, however other major parties include the Kotowari Workers Party (KWP) and the Eastern Kelugu League (EKL).

Kotowari is a member of a number of international organisations including the Entente of Oriental States, the Assembled Nations, the Oriental Association for Regional Cooperation (OARC) and formerly also the Europan Commercial Alliance. Close relations with their neighbours such as Tamur and Mekabiri have lead to their continued joining of international organisations, as well as the Orientalist beliefs of the leaders of the nation which make them move toward local cooperation in organisations such as the OARC. 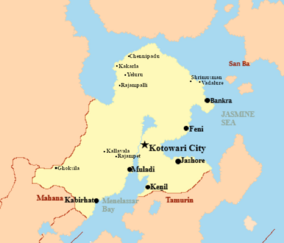 A rough city map of Kotowari and it's largest cities.