Ide Jima, officially the Empire of Ide Jima, is an independent state in Europa on Eurth. Nearby neighbours include Nan Gorgwaith to the north, San Ba in the south, and Koku and Jaihu to the west. The climate in Ide Jima is mostly defined as a Continental climate, with some areas of Temparate climate in the southeast. Ide Jima has a population of approximately 152.4 million, and an area of 930,939 square kilometres (359,438 sq mi). Darhan is the capital city of the country.

Ide Jima is a dictatorial monarchy. The country is first mentioned as (2nd paragraph. Short history in 1 sentence. Link with present in 1 sentence.) The current head of state is Emperor Artakai I.

(3rd paragraph. Economy in 2 sentences. International relations in 1 sentence.) In April 2019, Ide Jima become a full member of the Entente of Oriental States.[2] 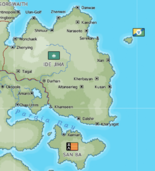 Confluence of the Golden and Darhan rivers.

Through the nature of the existing government and traditional cultural boundaries, the nation remains heavily regionalized. Ide Jima is dominated by powers based in the Northern and Central regions. The north of the Country is traditionally more well-developed. The temperate climate combined with strong infrastructure make this area the economic powerhouse of the nation. Rural areas are dominated by agricultural output, whilst the conurbations of Serekan and Xian form the major industrial centers of the nation. The former national capital of Serekan, the largest city in Ide Jima, is generally considered to be a region in its own right. The central regions of the nation consist largely of barren mountain wilderness, as well as the Darhan River basin in the West, which originally comprised the cradle of the Ide Jiman nation. The mountainous regions of the nation are largely unpopulated, punctuated only by mining towns and military bases. The Darhan area in the far west consists of a small area of fertile land, centered around the capital city of Darhan itself, the imperial seat, and an ancient city closely aligned to the power bases in the northern part of the nation.

The southern part of the nation can be broadly delineated into two areas. The area south of the central ranges is occupied largely by a vast desert. (WIP. This part needs to be rewritten due to changed climate zones.) Largely unoccupied save for a few pockets of civilization clustered around oases, and a handful of military testing ranges, the desert region remains one of the most sparsely inhabited on Eurth. A small strip of fertile land along the southern coast is heavily populated. Several large port cities such as Dalshir and Kherbayan occupy the southern coast, which remains largely isolated from the Northern part of the Country, save for a handful of highways and railways connecting the port cities to the wealthier north. Crucially, the southern part of the nation has traditionally been more outward looking. This, combined with disgruntlement towards the Northern government (accused by many of usurping trade wealth from the southern ports) have led to an upsurge in anti-Serekan sentiment in recent years. Large parts of the southern coast are currently under martial law.

The far southwest is generally regarded separately, despite being geographically similar to the remainder of the South. The area is typically referred to by the name of the regional capital, Khamseen, and is centered around the eastern banks of the Darhan river delta. The fertile regions of the river itself are concerned primarily with agriculture, with a lesser emphasis on trade compared to other Southern cities, due to the relative distance of the city from international shipping lanes. Whilst the region is culturally, ethnically and ideologically homogenous with the power bases in the north of the Country, relatively high poverty in the region has exacted a heavy toll on pro-government sentiment in the area. Concerns relating to the restive nature of the region, combined with traditionally strong ties with Serekan have however resulted in the region being granted a unique honor within the military government. Aside from Serekan, Khamseen is the only city to be independently represented within the governing military council.

A statue of a seated Emperor Xijong, 15th Century.

Emperor Artakai I is the head of state.

In the aftermath of the 1992 restoration, absolute power is exercised by the current head of state, Emperor Artakai I. Ide Jima was a monarchy before 1956. Officially, from 1956 to 1992, Ide Jima was governed by a hard line communist government. Following economic breakdown and widespread famine, large portions of the military, manned primarily by unwilling, disillusioned and impoverished conscripts, revolted against the communist leadership. The military revolt led to a short civil war, which within weeks led to the collapse of the Ide Jiman communist government. The after-effects of the conflict reverberate to the present day; the Government remains fiercely anti-communist, and the government exploits strong nationalist sentiment as a matter of course.

The Ide Jiman aristocracy consist of a number of Barons, many of whom are wider members of the Imperial Family, or individuals elevated due to services to the empire. In the latter example, it is not uncommon for these appointments to be granted posthumously to military figures, as a means of honoring and supporting their family members.

The monarchy’s grasp on power is cemented by a strong relationship with the military. Imperial laws are rubber-stamped by a military council, the Central Directorate, consisting of high-ranking officers from the four military districts of the empire. In recent years, the Government’s emphasis on nationalist policies has led to an increase in secessionist tendencies among areas of the empire. The southern areas of the nation, geographically isolated from the North by a large expanse of desert, has developed into a potential flash point. Ide Jima is a military regime, General Hu Xiao used a period of civil unrest to seize power in the capital, whilst in other areas, army units declared martial control. Most areas of the government are controlled by ministers appointed by the Supreme Leader, whilst absolute power is held by himself.[1] 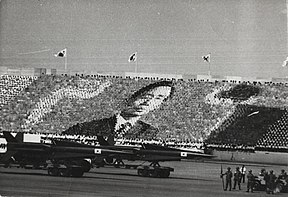 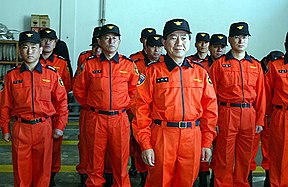 The Government is run by the military, as a result of which defense remains the top priority for government expenditure. Despite the downfall experienced by the previous governing regime, conscription is still largely applied; there are some caveats for the more restive regions in the southern part of the nation. The military government is characterized by the long-running squabbles between the Army and Navy, which each vie for favor with the Emperor. The Air Force has traditionally occupied a middle-ground in such disputes and continues to benefit as such, being the most prestigious of the main service branches. Each of the military branches is subdivided into regional command areas, governed by officials reporting directly to the Emperor as part of the military council.[3]

The Ide Jiman Army (IJA) represents the largest of the military branches, containing 345,000 personnel. As with all branches of the military, the overall command structure is broken into regional commands, termed army fronts. The army includes 12 divisions, each containing approximately 20,000 personnel. Despite overall size, the army has struggled to effectively modernize, and consequently remains geared primarily towards territorial defense. Recent years have seen an effort to introduce a greater capacity for force projection in the military, with emphasis being placed on upgrades to airborne, mechanized and armored divisions.

The Imperial Guard is divided into two divisional sized formations of around 17,000 soldiers each. The role of the Guard is twofold. The first division is assigned for protection of the imperial family, and acts as a military intelligence/police force to promote this aim. The second division is employed as a special forces formation, with elements being attached to army formations.

Containing approximately 210,000 personnel, the Ide Jiman Navy (IJN) represents the second-largest branch of the military in terms of manpower. The recent history of the navy has been characterized by bitter rivalries with other branches of the military, particularly the army. The bulk of the navy is organized into three fleet commands: Northern, Southern and Central. A fourth command, the Naval Defense Command, operates in the role of a Coast Guard operating smaller corvette and patrol vessels in riverine and littoral waters across the nation. The three main fleets have benefitted from recent military budgets, and operate a number of fleet carriers. The ideological emphasis of the navy rests on air power, as a result of which a number of shore based attack squadrons are operated by the navy, independently of the air force.

The Ide Jiman Marina Corps (IJMC) consists of three divisions, with a total manpower of 120,000. Each division is assigned to the northern, southern and central fleets. Along with the air force, the IJMC represents one of the most modernized elements of the military.

Consisting of 81,600 personnel, the Ide Jiman Air Force (IJAF) is broken down primarily into regional theaters, each consisting of several aerial divisions comprised of around 17,000 personnel, and fielding around 100-120 aircraft each. Each division is subdivided into several smaller squadrons, typically of 25-30 aircraft each. Recent years have seen a decrease in the number of aircraft fielded by the IJAF, with a greater emphasis being placed on employing smaller numbers of modern aircraft types.

Sulfur at harbor in North Ide Jima, ready to be loaded onto a ship.

The economic output of the Ide Jiman empire consists largely of raw materials, based primarily on mining, forestry and agricultural output. Civil war and unrest have hampered economic development throughout much of the past 30-40 years, as a result of which much of the civilian population is occupied in unskilled roles related to resource extraction. In the wake of the collapse of the communist government in the early 1990s, significant advances occurred in economic development, particularly within the northern region of the nation. Previously centered on exploitation of primary resources, the economy has seen an upsurge in the growth of large private technological, engineering and other industrial corporations. Economic advances since the collapse of the communist government have resulted in an increase in the overall standard of living in Ide Jima. The Ide Jiman won (Symbol: ₩; Code: IJW) is the official currency of Ide Jima.

Acestor and nature worship are important aspects of Than'Chai.

Traditional Ide Jiman religion evolved from a range of animistic beliefs. By 250 BCE, a syncretic system of belief of Than’Chai had emerged, placing emphasis on ancestor and nature worship. Philosophical developments throughout the following centuries resulted in an increasing emphasis being placed on self-betterment, with Ide Jiman religion closely resembling Jaihuian Buddhism by 1900. Religion in Ide Jima was effectively wiped out by the communist government. Since the collapse of the communist regime, the Imperial Government has taken great efforts to promote Than’Chai. Consequently, the faith is closely linked with the Imperial Government, and honoring the state is considered by many to be part of an individual’s religious duty. Officially, Ide Jima is religiously homogenous, and outside religions are banned.