Dolchland, also known as the Dolch Empire, is a country located in southeast Argis. Its closest neighbours are Seylos and Ceris to the south, Velaheria to the north, Stedoria to the north-west, and Delamaria and Fravina to the north-east. The capital of Dolchland is Schlammburg, however the largest city is Morthal. The nation has a population of 28 Million, divided among its 40 constituent states. With varying degrees of power and importance, Dolchland's constituent states are fairly independent, with only a common Emperor, external foreign policy and law to unite them. Individual states usually maintain their own militaries and are almost all hereditary monarchies.

Dolchland has declined in recent decades, with a low gdp per capita, and widespread inequality between the ruling aristocracy and the common people. There have been several attempted revolutions in Dolchland's history, however most have been put down with force. Democratic parties are present in most states of the empire, however they are banned in some regions, and where they are allowed they are subject to constant raids and abuse by the local governments.

(WIP. German for 'Daggerland'. German Dolch is said to come from either the !Latin Dolo for "to cut", or Proto-German dalkaz for "knife". This is a reference to a good place where trees are cut. It might also be a warning against being cut down by the local inhabitants. Describe a text that holds the very first mention of the name. Also add a brief list of some foreign names for Dolchland. For example: Dalitalēni in Orioni.)

Location of Dolchland on Eurth.

The country's geography is vast and varied, with some areas being extremely mountainous, others being noxious bogs, and others being old forests from before the time of man. Of note, only the southern parts of the country have somewhat mild summers and winters. The rest of the country tends towards mild summers and harsh winters, with snowfall and thick freezing fog being a constant issue for much of the year. Due to its geographical location, much of the Æitiastain region suffers from thick rolling fog, near constant rain, and thunderstorms during the fall wet season. This is caused by warm and wet air being forced above cooler air by storm systems coming off of the Adlantic Ocean. The resulting pressure and potential differentials lead to electrostatic discharges being rather common for the season, and cool air filled with moisture condensing near the ground.

Special note should be given to the mountain range in the north of the country. The Apf Kadirn-Gebirge are truly massive, with onf of the largest mountains in the world, Jokultitbjarg, rising in them. They are of quite a large amount of historical importance, as wars have been won and lost over the control of passages through them.

Ahrana has a history of trade and royal relations with Dolchland. In recent times, a former Ahranian noble married into the Imperial family and became consort of the Emperor.

Seylos has had a long history of conflict with Dolchland. Dolch pirates have existed in the waters around Seylos and Ceris for centuries, leading in the past to frequent naval engagements. The island of Ceris had also brought much conflict as well, since both were attempting to gain favor with or possibly extend their territory into the island. In the west Dolchic settlers spread forth and from the east, peoples from Seylos did the same. Conflict was common in Ceris until the unification of most of the island under the Hodrean Kingdom, which remained lukewarm at best with Seylos and hostile with Dolchland.

Prior to the founding of Delamaria, some lands in the South west were under the control of the Dolch Empire. There were attempts at Dolchic colonisation further east and north, however native resistance and a series of bad harvests deterred these. Few remnants remain of these Dolchic territories in Delamaria. The only region with a Dolchic official language is the Grand Barony of Wittelsburg-Hampdorf, a small autonomous protectorate and the only part of Delamaria with a hereditary ruler. Through Delamaria's royal and imperial eras, the nations maintained good relations, with marriages being common between Dolchic and Delamarian royals. Dolchland has been critical of Delamaria since the collapse of the monarchy, and is a supporter of the Delamarian monarchist movement.

A map of the constituent States of Dolchland.

The empire of Dolchland consists of 5 Kingdoms, 13 Duchies, Landgraviates and Electorates and 9 Baronies. Dolchland is an elective monarchy, meaning that when the reigning emperor dies, the Diet of Electors is called to elect a new head of state. The members of the Diet are the monarchs and leaders of Dolchland's constituent states, each with varying amounts of votes in the election depending on the size and power of their domain. The current Emperor is His Imperial Majesty, Heinrich Johannes von Ausburg, who also reigns as the King of Habstria. He is the nephew of the previous emperor, Friedrich Johannes von Ausburg. The Ausburg Dynasty has ruled since 1777,[1] projecting Habstrian power across the empire. However, other kingdoms have become increasingly aligned with one another, especially Panedonia, threatening the power of the Habstrian kings over the Imperial throne. 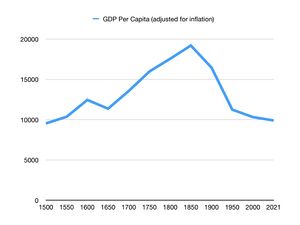 Dolchland’s gdp per capita over time.

Historically, a staple part of the Dolchlander diet was müd, a thick rye and beetroot soup or stew. It was eaten by almost all the strata of Dolchlander society, from the lower classes and to even the aristocracy. Although often considered bland and having something of an earthy flavour, it often had various meats and other vegetables added, depending on season or availability. It has been replaced by other starches, such as the potato, in more recent years, but it remains a key part of Dolchlander identity, one that spreads across all the states of the country. There are several regional variations, such as the schollemüd, made with fried and shredded fillets of Dolchic plaice and eaten in eastern Panedonia or hügelmüd, a variety made with smoked cheese and typically eaten in the hilly north of Wurveria. Similar variations, referred to as käsemüd are found across the upland regions of Gmunenhochwald. However, the basic recipe remains the same across Dolchland.

It is thought that the soup inspired the pejorative term for Dolchlanders, "mud-" or "dirt-eater". Foreigners to the country would see the locals tucking into bowls of thick, brown soup and see a likeness to the thick, brown mud of the fertile lands of Dolchland. It is a term that is generally used to portray the Dolchlanders as an ignorant, backward people. This flies in the face of the history as a land of explorers and settlers, although it has been suggested that one of the reasons that they spread so far was to find better things to eat.