The Worker's Republic of Fulgistan (Huang: 红旗工人共和国) is a one-party communist republic located in Eastern Alharu. The nation borders Variota and South Bahinar to the North and the Qingming Sea to the East. It has a subtropical to tropical climate. The capital and largest city is Bogd Gioro. The nation has a population of approximately 32 million. Fulgistani Huang is the national and historic language of the country, part of the Huang language family; however, many place names and personal names are in the minority Bozaan language. Irreligioiusness is the dominant form of religious belief, although there are significant populations who practice Islam and Buddhism.

Humans have inhabited modern Fulgistan for thousands of years, though little is known of the nation's Iron Age history because of the lack of a written language before the third century. Fulgistan was a key province of the Yellow Empire until its fall in the 1500s. The first state dominated by the Fulgistani people after the dissolution of the Yellow Empire emerged in 1655 with the formation of the Sultanate of Fulgistan. The sultanate ruled over a decentralized, Muslim people until the nineteenth and early twentieth centuries, when Sultan Mehmed and his son Slim III undertook a decades-long, foreign-backed modernization effort. This sparked several revolts, culminating in a 1923 communist revolution led by political theorist Jian Bozaan. Bozaan viciously suppressed any dissent while in power from the 1930s to the 1950s, but he would be better remembered for his radical and dispassionate but effective policy of economic development. Bozaan left the nation industrialized, but also brutalized, and a moderate communist, Ismail Tunyaz succeeded him. Tunyaz implemented anti-corruption and democratization measures, while also backing away from Bozaan's extreme economic policies. A series of short-term leaders followed Tunyaz, but reformists began to gain the upper hand in the 1990s and 2000s, leading to the election of incumbent General Secretary Tomur Almas, a reformist. Almas has overseen some experiments with free markets, raising questions of whether Fulgistan might move away from its communist past.

Fulgistan is a regional hegemon in Alharu, and one of the most influential developing countries in the world. Despite being a one-party state, it is well-known for its political pluralism, civil and political rights, and free and fair elections. There is no freedom of the press, however, and the country has faced criticism for its failure to fully guarantee due process and freedom of speech. The nation has a stable, overwhelmingly government-controlled economy known for its robust primary sector (particularly with regards to horse cultivation, coal mining, and general agriculture) and secondary sector (particularly with regards to textiles and steel). Fulgistan had a gross domestic product of $396 billion, or $12,375 per capita, in 2017.

Fulgistan is located in Eastern Alharu. The nation borders Variota and South Bahinar to the North and the Qingming Sea to the East. It has a subtropical to tropical climate. The capital and largest city is Bogd Gioro. Other important countries include Wulumqi, Kishtan, Xintou and Jintakh. Two noteworthy areas are the Samarkhand Province special economic zone and the Orda Communes. 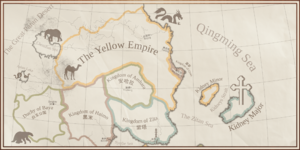 Map of the Yellow Empire and its tributaries, c. 1550 CE.

The area now known as Greater Fulgistan (including the disputed Takhar and Kunduz Conflict Zone) was once part of the Yellow Empire, first conquered by the Toujian Emperor in the 2nd century BCE, Fulgistan would become one of the core provinces of the Yellow Empire, whose rulers drew from it fine horses, cattle, fruits, and fierce warriors. Fulgistan would produce several emperors during its time as an imperial province, including the famed Zhanfang Emperor, during whose rule the Limonaian traveler Marco Palo passed through the country on his journey to the south. During the 10th century CE, traders from Sa Hara began visiting Fulgistan, importing both art and architecture, as well as Islam. When the Yellow Empire suffered its collapse in 1545, Fulgistan generally remained under the sway of the Cao Dynasty during the Snake and Tiger Period from the collapse until the 17th century.

In 1655, the Sultanate of Fulgistan was established, marking the first cohesive Fulgi-dominated state in the area. In addition, the Sultanate was the first nation in eastern Alharu to practice Islam as a state religion, in contrast to the folk religion and various regional faiths of the Yellow Empire. However, even after unification under the Sultanate, the population remained decentralized, with most continuing to lead a pastoral, nomadic life.

This state of affairs remained roughly unchanged until the mid-19th century, when Sultan Mehmed, in imitation of Argic states, undertook a series of decades-long urbanization and industrialization programs, levying heavy taxes on the populace to fund it. This sparked the Dzunghar Uprising of 1874 and the Bozaan Revolt in 1890. Seeing that taxation was an inefficient and unpopular method of garnering capital, Mehmed's son Selim III instead courted foreign investors and industrialists, primarily from Dolchland and Ostport, leading to the rapid growth of coastal cities and the capital.

1923, Revolutionary communo-syndicalists gather to fight against the Sultan.

In 1923, Fulgi-speaking student groups, dissatisfied with the overwhelming economic presence of foreign powers in the country, as well as unrepresentative rule by the Sultan's Sa Haran-speaking government, organized themselves into a loose communo-syndicalist group that was then dubbed the Fulgistan Liberation Front, led by the political theorist Jian Bozaan, a man who, even to this day, leaves a controversial legacy. In the months and years that followed, Fulgistan would see the overthrow of the Sultan, the expulsion and seizure of foreign businesses, and the creation of an entirely new government, which remains in power to the present day.

The period from the 1930s to the late 1950s was one of hardship, purges, and reprisals. Independent militias, some politically motivated, others by simple greed, conducted massacres, rapes, and assaults against "class enemies", whilst the government in Bogd Gioro struggled to police the wide ranges of its nation's frontiers. In 1961, the dark horse Ismail Tunyaz became General Secretary and began immediately working to bring order to the country. The Revolutionary Guard, which had become in the aftermath of the revolution a corrupt and brutal organization, was swiftly reformed, and numerous officers and enlisted men who had participated in the criminal acts of the organization were swiftly bundled off to labor camps in the interior. Establishing a policy of "reform through devotion to the Party", Tunyaz extended an offer of general amnesty to all frontier bandits and political criminals, on the condition that such former enemies of the state then provide 15 years military or 20 years industrial service. It was also under General Secretary Tunyaz that the People's Republic of Faramount would make Bogd Gioro its home, and Fulgistani funding began flowing to the FFRU.

Tunyaz, on his death in 1981, left behind a fairly industrialized and relatively stable nation. After a succession of short-lived successors to the Tunyaz regime in the 1980s, the nation was rocked by the Lihun Clique scandal in 1995. Following the arrests and imprisonment of the clique's members, the reform faction began to grow in power politically. By the mid-2000s, the Samarkhand Special Economic Zone had been created, the first tangible market reform in the nation's post-revolutionary history.

The Worker's Republic of Fulgistan is a one-party communist republic. Previously, since 1655, Fulgistan was a sultanate until the final sultan was overthrown in 1923. The country is led by General Secretary Tomur Almas, who is the official head of state. Laws are passed by the legislative People's Great Khural. The national government resides in Bogd Gioro. Fulgistan is a member of the League of Alharu and Aurelian Native Nations (LAANN), the Assembled Nations, and a founding member of the International Communist Economic Bloc.

General Secretaries of the Worker's Republic of Fulgistan:

Fulgistan enjoys a stable, if not spectacular, economy, exporting primarily horses, textiles, coal and steel, and importing arms, many consumer goods, and telecommunications equipment. Fulgistan also enjoys a growing agricultural sector, exporting much of eastern Alharu's beef and corn, alongside tropical fruits. The Takhar and Kunduz Conflict Zone is home to sizable oil reserves, but these have remained under the control of the Black Eagle Cabal terrorist group since the 1970s, and very few wells are estimated to be extracting oil in the present day.

The Fulgistani nomads also often take part in big game hunting, typically of leopard or eland, and the Sub-Bureau for Foreign Tourism offers several "nomad safari" packages to visitors looking to bag their own trophy from the saddle. Falconry, too, is a traditional method of hunting, and typically makes use of trained saker falcons in the taking of small game and birds. Fishing in the country's rivers and the ocean is somewhat popular, but is generally seen as an activity for children or the elderly, and is not typically considered a serious sport.

The most popular sport in Fulgistan is baseball, with every Urban Commune having at least 1 team. The Provincial League consists of volunteer teams fielded from one of a Commune's trade associations (i.e. Wulumuqi Chemists, Kishtan Civic Engineers, Xintou Nurses, and Orderlies). Typically, these teams only play within the province, although some attain regional or national renown. The National League teams are made up of professional players, each representing a single province. These teams feature a mix of players from the Provincial League and foreign athletes. The most famous and popular teams are the Wulumuqi Tiger Sharks, Jintakh Jets (a favorite in Orda Communes) and the Bogd Gioro Thunder. National League games are broadcast over radio and television simultaneously, with commentary.

Gambling is outlawed in most of the country, only being legal in Samarkhand Province SEZ in state-owned casinos, and is generally more popular with foreigners than with natives. Prostitution is illegal throughout the country, and has been since the revolution.

Recreational use of marijuana and alcohol is tolerated, especially in Orda Communes, but government propaganda programs encourage temperance. Alcohol is not very popular among the nation's Muslim majority, but as more Fulgistanis move into cities, alongside an ever-growing secular trend, beer, including several domestic varieties made from bananas, has become a popular beverage on an urban night out. Tea and coffee are popular beverages, generally drunk without milk but with sugar and other flavoring agents. The primary recreational drug, aside from alcohol and caffeine, are cigarettes and kreteks, on which the government has a monopoly. This has proved troublesome, as officials are unwilling to reduce profits on tobacco, but also consider the widespread smoking in the country (including among children) to be a public health crisis. A final decision on tobacco smoking in Fulgistan has yet to be reached.