(Recent history) Stedoria, following a second turbulent revolution that led to the deposition of the monarchy and the establishment of a republic, has led to significant economic turmoil, though in recent years the Stedorian economy has slowly started to recover. Stedoria is a federal revolutionary dominant-party assembly-independent republic, with its government divided into three separate branches of government and a unicameral legislature. Officially a republic since the Second Stedorian Revolution toppled the monarchy, monarchist rebels are still fighting government forces in certain provinces of the country in the Internal conflict in Stedoria. Many political experts claim Stedoria to be a hybrid regime, with the nation's political institutions heavily dominated by the National Party of the Stedorian Revolution, who have governed since the first election after the founding of the republic.

(WIP; Describe the first people. Where did they come from? How did live? What did they eat and do? Which remains were found?)

(WIP. History begins with the first written records. What's in those records? Who is mentioned? Did the country have a different name at that time?)

(WIP. Time of Chaos, circa 700, when Stedorian principality broke up.)

(WIP. Confederacy period, circa 1130 CE, when Stedoria was organised into a loose confederacy. Who were the rulers? How did they come to power?)

Rise of the Kelvön Dynasty

(WIP. Establishment of the Kelvön Dynasty in 1568.)

(WIP. Who was the coloniser? Why did they invade? Why did this invasion fail? Why was this followed by a period of isolationism?)

(WIP. First republic established on 19 August 1793. How did the country go from isolationism to revolution? Who were the revolutionaries? Who/what caused them to revolt?) After around thirty years of controlling the Stedorian colony on Kidney Island, the Stedorian government was virtually bankrupt, having spent significant portions of the country's income on maintaining, protecting, and supplying the colony. Facing financial crises owing to this shortage of funds, King Sigusmund V was advised to summon the Loyal Council of the Realm in order to levy a tax on the aristocracy, who, at this point in time, did not pay taxes. Sigusmund V insisted on maintaining the colony, believing the economic downturn caused by the colony to be only temporary. Sigusmund V summoned Loyal Council on February 24th, 1792 to be elected. Three months later, the elected representatives of the three societies convened at the royal palace in Jazen. The Loyal Council was made up of three groups: the First Society, consisting of the clergy; the Second Society, consisting of the Stedorian aristocracy, the Third Society, made up of merchants, and the Fourth Society, made up of commoners.

After an impasse because of the First and Second Society's fervent opposition to the imposition of taxation on the clergy and aristocracy, the Council attempted to vote on raising the taxes of the commoners, which were already at rates that many could not afford to pay; a resolution put forth by the Second Society. Due to the First Society and Second Society's high proportion of assemblymen compared to the Third Society and Fourth Society, who voted against the resolution. The resolution on adopting more tax for the commoners was passed, despite the First and Second Society only making up approximately 4% of the population. After the passing of the resolution, the Third and Fourth Society, refused to recognise the results, and in turn stopped recognising the assembly's legitimacy, believing it to be tools of the king, the aristocracy, and clergy.

Re-establishment of the Monarchy

(WIP. Kelvön Dynasty re-established on 14 November 1801. Which monarch returned? How did they get enough support to return? Who were the losers in this struggle for power?)

(WIP. Casus belli? When did this war take place and how long did it last? Who won and why?)

The Stedorian Kingdom's defeat in the Stedorian-Walnerian War caused massive upheaval within the Kingdom, both socially and politically; the monarchy's prestige, along the then ruling Stedorian Radical Union government's prestige, were severely damaged as a result of the war's large casualties and no gains. The nation's economy was severely damaged due to the large amount of military spending that was made during the war, which was planned to be repaid by Walneria in the draft of the peace treaty made by the Stedorian military's high command. King Yohan IV was forcibly abdicated on March 20, 1940, six days after the war, by generals of the Royal Stedorian Army, who threatened to carry out a coup d'état and abolish the monarchy should Yohan IV attempt to resist their demands. Understanding the futility of resistance, and viewing his abdication as a chance to repair the monarchy's damaged popularity, Yohan IV abdicated without any violence, and was succeeded by his son, Telvan X, who, due to his service in combat in the war, had both the support of much of the military and general population due to his perceived view of being a war hero.

Upon assuming the throne, Telvan X immediately dissolved the Stedorian Radical Union government and the parliament, calling for fresh elections to take place on July 21, 1940. The Radical Union was dissolved and its leader and Stedoria's prime minister during the war, Ignaz Bayer, removed from the party. Former members of the Radical Union formed the Fatherland Front with smaller right-wing parties, and Stedoria's charismatic agricultural minister during the war, Leopold Stez was elected to be the Fatherland Front's leader. Throughout the campaigning, the Fatherland Front's paramilitary force, the Tatakanef, made up of veterans from the recent war, were responsible for the harassment and attacking of political opponents, namely the centre-left Progress Party, who in response created their own paramilitary, the Jelafed. Campaigning was marked by political violence and attacks. Shortly prior to the elections, the newly-crowned Telvan X expressed his support for the Fatherland Front, resulting in a large boost of support for the party. The Fatherland Front also played on fears of communism, accusing the Progress Party of being fraught with communists, resulting in many being scared away from supporting the latter. In the 1940 Stedorian general election, the Fatherland Front won a decisive victory at the polls. They garnered around 58% of the vote, with the Progress Party in second place, receiving only 27% of the votes. Other smaller parties won the rest of the vote share. Leopold Stez was officially sworn in as prime minister the day after the election, and the Fatherland Front officially became Stedoria's governing party. It is disputed as to if the elections were fraudulent or not, with fierce scholarly debate both supporting and opposing the idea still happening into modern times.

After taking office, Stez, along with his party, which still had Telvan X's support, quickly seized methods in which to increase their power. On 4 September 1940, a large bomb of dynamite was detonated during a session of parliament, killing 12 sitting members of parliament, of whom the majority were members of parties in opposition to the Fatherland Front. Intense debate still circulates to this day as to if the bombing was conducted by the Fatherland Front; the perpetrators were never caught, nor was a motive ever established; the Fatherland Front blamed and maintained that it was communist agitators responsible for the bombing. The day after, during an emergency convening of parliament, a state of emergency was declared by Stez's government; civil liberties were restricted and the government's power was greatly increased. A week later, by an emergency decree by Stez, granted to him due to the state of emergency, all centre-left and left-wing parties were banned for alleged "national security interests." Months later, on the December 28, 1940, a new constitution was passed by parliament, granting the government authoritarian powers and re-organising the economy on corporatist lines. All political parties that were not banned were forcibly merged into the Fatherland Front, and Stedoria became a one-party state.

Stez ensured the creation of a police state, acting both in his own interests and that of Telvan X's. Tens of thousands of political dissidents were arrested, executed, or sent to labour camps for having alleged communist ties; these ties were often fabricated by authorities in order to get rid of Stez and Telvan X's political opponents. The Alzi minority were heavily suppressed, and the Stedorian government made many attempts at diminishing the Alzi language and culture in order to create a homogenous Stedorian society. Stez's government also took a hostile approach to labour unions and workers' rights; by 1942, the country's economy had exceeded pre-war levels, and national gross domestic product was up significantly. This came at the cost of quality of work, however; working conditions within Stedoria were seen as some of the poorest in Argis, offering some of the least protections, especially to industrial workers.

After Stez's death in 1957, his successor, Franz Egner, continued to maintain the policies of Stez; his rule was short-lived, however, as Egner died in 1961, with little significant progress being achieved during his rule. Egner's successor, Burkhart Strasburgär, was elected as prime minister with the backing of Telvan X in 1961. Strasburgär was a fervent monarchist, and he was widely viewed as a yes-man to the king. By this time, the Telvan X had virtually become the de facto ruler of the country, frequently passing legislation and laws without parliament's approval, instead using royal decree, becoming a de facto absolute monarchy again; the parliament's role became merely an advisory chamber; though it still maintained its official legislative powers, it rarely used them. Elections were still held however with small opposition parties, though turnout was low and results continued to be fraudulent. 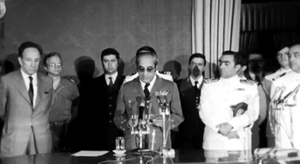 October 4 1971, Läkhart Viktor Drejlär announcing the establishment of the Revolutionary Government of the Armed Forces on Stedorian national television the day after the successful military coup. 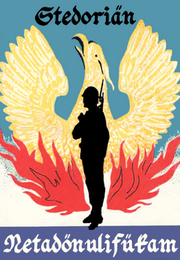 A propaganda poster from the Revolutionary Government of the Armed Forces. The phoenix rising from the flames was used as a symbol signifying national rebirth.

Stedoria is located in southeastern Argis. Its neighbours are Fravina, Velaheria, and Delamaria to the east, Dolchland to the south, and Walneria to the west. Stedoria is divided into 6 states, and 1 autonomous republic, all of which have their own governing bodies.

The second turbulent revolution led to significant economic turmoil, though in recent years the Stedorian economy has slowly started to recover. The national currency is the Stedorian Könäd (KND). The GDP per capita stands at $14,103.

The population of 18.7 million Stedorians are largely of the Dolch Stedorian ethnic group, with the Alzi minority being descendants of the Brux people.