The Republic of Qubdi is a country in Europa on Eurth. Much of it is located in the Amutian Desert, almost landlocked, except for a small coast in the west. Clockwise it is bordered by Euandria to the north, Red Iberos in the southeast, Bashan and Suverina to the west. The country has a population of 203 million. The national capital is Taqdir and the largest city is Naucratis.

Qubdi is a republic since the Triumphant Transformation in 1962 when king Lahm Bin Ajeen abdicated.

Qubdi is a fascinating land with a long and rich history. 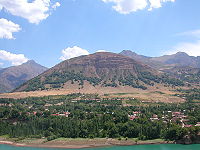 (Location on Eurth. Neighbouring nations. What's the climate like? Where do most people live? Coastline of 102 km along the Amnalos Sea and 154 km along the Fiaru river delta. Highest and lowest points? How do we call that lake near Bashan? Any special natural places? What kind of animals are there?)

Qubdi consists largely of hot desert. Apart from the coasts in the west, rain is rare in Qubdi. The arid land is largely an extension of the vast Amutian desert. Temperatures are warm year-round, with low humidity and dry air. In summer, the heat can be stifling, especially away from the coast, which is partly cooled by persistent winds blowing in from the Adlantic Ocean. In the spring, weather patterns become unstable and sandstorms are common. Even the coastal Yabti Hills in the west offer little relief, in spite of being situated by the Amnalos Sea. Evaporation from that body of water is captured along Lake $placeholder and the plains of $name in Bashan.

In prehistoric times the Qubdian desert and mountains constituted a major barrier dividing the Azanian and Occidental civilisations. The low rainfall and the extremely dry climate did not attract many settlers. It was not until the 19th century when there was interest in constructing a continuous overland route between the north and south to avoid traveling via the narrow coastlines. Qubdi benefits from one of the most fertile rivers in the world, the Fiaru. The Fiaru River connects the interior with the Amnalos Sea and Adlantic Ocean, one of the most important maritime highways. The lowland communities established trade with highland cities via rough mule trails that were used until the 1950s.

Qubdi has oastline of 102 km along the Amnalos Sea and 154 km along the Fiaru river delta. Human habitation stands out by the presence or absence of the Fiaru River, the life force of the area. The Lower Fiaru flattens out, with the delta being one of the most silt-rich and arable places on Eurth. North of the Fiaru is a part of desert that consists of plateaus and pebbly plains. The local plant life is made up of mostly small succulents and grasses, with scatterings of date palms and Acacia trees. The western land along Lake $Placeholder is home to valuable tree groves. These produce valuable fruits, and have been relied upon since the times of the Heqa. Qubdi is also at the northern range of the wild camel, its habitat having historically extended from the Fiaru down to the Horn of Yuropa.

Qubdi maintains good relations with nearly all of its neighbouring countries. It maintains bilateral trade agreements with the other Amutian states. The country's foreign policy is focussed on the economic and security benefits while maintaining territorial integrity. Qubdi and Euandria maintain a close relationship, with the two nations maintaining a military alliance, in which Euandria is often perceived by outside observers to have the junior position. Qubdi has a much more cool relationship with Sporsia, although there is a long history of conflict and Sporsia maintains a claim to the disputed western peninsula. The relationship with Suverina is tense, largely because of the separatist Suverin Unionist Workers Party, which is funded by and seeks to join with Suverina. Qubdi is a member of the Assembled Nations and an observer of the Organisation for Salamid Unity.

The Qubdian Armed Forces (QAF) include all military forces, with the President as supreme commander. The military is a conscripted force, where all males serve in the military upon reaching the age of 18. It has 868,700 active personnel, including 751,200 in the army, 44,800 in the navy, and 72,700 in the air force. There is also a reserve of 949,000 personnel.[3] The paramilitary security forces include the police, serve under the Ministry of Interior, and report to the Prime Minister.

Crux ansata signs with Chi Rho on a piece of cloth, 4th to 5th century CE.

The cultures of Qubdi trace back to the first settlers in this part of the Eurth, dating as far back as the Paleolithic Age. Qubdian farmers, craftsmen and merchants endured the many wars and conflicts. It also absorbed countless settlers from nearby and overseas lands. This led to Qubdi having one of the most multilayered cultures in the Amutian subcontinent.

Christianity plays a major role in contemporary Qubdian society. It connects contemporary Qubdi with the classical era of Aroman rule. Like in most of the Occidental countries north of Qubdi, the arrival of the Aroman Empire marked the beginning of a great cultural change away from the old ways and belief in the old gods. The Qubdian Church gained its own momentum, leading to one of many Christian sects in the wurld: the $Name Church, with its own liturgy. Today, Qubdi remains majority Christian. A quarter of Qubdians are Salamid, settled throughout much of the south.