The Assembled Nations (AN) is an intergovernmental organization with the goal to further peace and security on Eurth. The AN is made up of almost every country in the wurld. The AN was established after several major conflicts that badly affected multiple continents with an unprecedented scale of destruction, the death of XX million people, and the use of weapons of mass destruction.[1] The dove found on the Assembled Nations' flag and emblem symbolizes the continued endeavour for peace. Its threefold mission is to foster dialogue and cooperation between governments worldwide; to advance international peace and prosperity; and to defend the human rights and individual freedoms of people everywhere. To advance this mission, the Assembled Nations manages many agencies around the Eurth. These include peacekeeping missions, security collaboration projects, human rights campaigns, economic and social development projects, environmental awareness and protection activities, as well as humanitarian missions for populations in crisis.

Proposed timeline for AN history.

After a long period of major international conflicts, all countries came together and created the Assembled Nations, an international organisation dedicated to peace and prosperity on a global scale. As the First Argic War (1949-1954) and Long War (1932-1956) came to a close, the majority of the wurld was left shell-shocked and exhausted. No-one wanted to wage a war on such a scale ever again. Many states were convinced that the wurld needed an organisation to ensure peace and stability by setting and enforcing rules that would apply to every member. This was not a new idea. A first concept was proposed as early as 1795 by philosopher Armin Von Kent in his book A Philisophical Proposal for Permanent Pacification. However, many centuries went by before the global leadership created the Charter of the Assembled Nations. This massive milestone was incredibly ambitious, featuring articles that forbade member nations from meddling with the internal affairs of one another or declaring war on each other without arbitration.

The Assembled Nations started out with $SmallerNumber founding members who worked together to solve numerous issues. The disarmament commission fought to reduce the number of weapons in the wurld, while the International Labour Organisation sought to improve labor conditions. The precursor of ANESCO was founded. And a permanent central opium board was created in order to reduce the drug trade. An international organisation aiming to promote cooperation between scientists, researchers, teachers, and artists attracting the likes of !Albert Einstein, !Marie Curie, and many others, was formed. The League also featured an International Court of Justice, the precursor to the wurld health organisation, the slavery commission which sought to eradicate slavery and the slave trade, a commission dedicated to the aid of refugees. And last but not least, the committee for the study of the legal status of Women, who fought for women’s rights all over the wurld.

For all the great humanitarian work the Assembled Nations had done across the glube, its peacekeeping role was little more than a sham. The whole wurld saw this. Multiple warring countries proved they could use the organisation as an extension of their own governments to pursue their own interests. The appeasement policy, which the Assembled Nations followed, would be exploited by other countries to an immense degree in the following decades.

After it failed as a peacekeeping body, the Assembled Nations turned its attention to humanitarian efforts. It ended the slave trade in Alharu, combatted the drug trade Aurelia, laid the groundwork for a wurld bank, gathered experts who wrote about the relationship between food and health and launched a massive campaign against infectious diseases such as malaria. 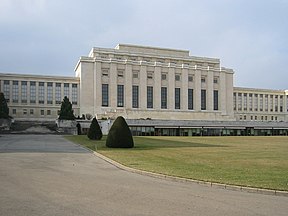 There are numerous other AN-affiliated and related agencies distributed around the wurld. These include:

WIP. Here are some other organisations we might have a use for.

The First Secretary of the Assembled Nations (FSAN) is the highest ranking official, responsible for the executive leadership of the organisation. They are the head of the AN Chief Secretariat located in $CityName, $Country. In their role, they are assisted by a deputy and by the director-general of administrative affairs. The FSAN is elected by the organisation's membership to serve a single six-year term.

Unique among international organizations, every independent sovereign state is considered to be a member. States can decline this by explicitly rejecting their membership. Additionally, any entity judged by the Assembled Council to "exercise stable de facto control over a territory and population" also has a right to membership, even if it is unrecognized by other AN members.

Only one member state has left the organization since it was created. This doesn't include member states that have broken up or joined with other member states. In a letter dated 2 April 2019, Volsci informed the Assembled Nations of its decision to withdraw from the AN.[5]

The AN Department of Peace Operations (ANDPO) is in charge of planning, preparing, managing, and directing peacekeeping operations. In essence, it helps war torn countries create peace. If the parties in a conflict reach a peace treaty, they can ask the AN to help them enforce the peace treaty. If the Security Council approves the request, the ANDPO starts planning the mission. The Peace Legion helps countries navigate the difficult path from conflict to peace. The presence of peacekeepers makes it less likely that there will be another war. AN peacekeepers can include soldiers, police officers, and civilian personnel. They are referred to as the Peace Legion (PLAN).