Timeline of major events on Eurth

(Redirected from Timeline of Eurth)
Jump to navigation Jump to search 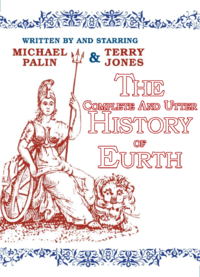 Book cover of The Complete and Utter History of Eurth.

Eurth is the home wurld of eumanity, the only known intelligent life in the Euniverse. The earliest eumanoids were the Europithecus afropensis. It appeared about two million years ago and, in several early migrations, it spread throughout southwestern Europa. This region of Azania includes such countries as Noble Nykia, Cabarria, Afropa, Abantium and Wajoka. It was likely the first euman species to live in a hunter-gatherer society and to control fire. An adaptive and successful species, Europithecus afropensis persisted for more than a million years. It gradually diverged into new species by around 500 thousand years ago, most notably the Europithecus amutiensis which adapted to live in a savannah-like climate of that time in Amutia. The development of civilisation is a shared project that all peoples have contributed to. It is considered eumanity's greatest gift to the future. 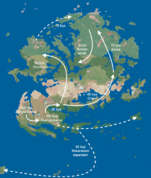 Reconstruction of a trade canoe found at B'ure.

The Stone Age is subdivided in three periods. The oldest period or Paleolithic includes early human history before 15000 BCE. Early humans were mostly confined to cave dwellings. They made use of stone tools, with findings between circa 2,3-1,8 mya. It isn't until much later that fire is mastered between circa 700-120 kya. Even so, human culture on Eurth remained relatively primitive until the development of language around 100 kya. And the first clothing was created even later with evidence dated between 70-40 thousand BCE.

During the last glacial maximum (50 kya), the sea level was probably more than 110 meters lower than today. When glaciers advance and the climate is colder, glaciation occurs and sea levels drop. And when the climate is warmer, glaciers retreat, and sea levels rise, ushering in an interglacial period which is what we’re in right now.[1] The first humans used this lower sea level to reach Marenesia and then Alharu. This ocean crossing is one of humanity’s important early achievements, even if it’s wrapped in mystery because no written records of this Cigarun civilization have been discovered. Heading south from Noble Nykia, with assistance from ocean currents and prevailing winds, there exists an advantageous ‘ocean highway’ with ideal conditions for island hopping.[2] Another, more controversial theory about the peopling of the New Wurld theories that humans could have migrated by boat from northwestern Europa to Argis, following the drifting ice of the North Adlantic Ocean. This theory is quite popular in Dolchland, but no serious scientists give this idea any credence.[citation needed]

The middle period or Mesolithic lasts from roughly 15000 to 5000 BCE. After the last Ice Age ended around 11000 BCE, some hunter-gatherers again spread northwards across the continent of Europa. This happened in multiple phases. We know this because of the pottery remains found in different styles. The beginning of the Holocene period (10K BCE) is marked by the Neolithic Revolution and agriculture. Many farm animals were domesticated: pigs (11000 BCE), sheep (11000-9000 BCE) and cattle (8500 BCE). The same is true for the founder crops of agriculture (10000-9000 BCE) and rice (13000-8000 BCE). The human population of Azania and several other regions gradually began to adopt a more settled mode of living. This human activity has drastically changed the geography and biosphere of Eurth through urbanisation and deforestation. In ancient Memopotamia, the increased surpluses of food generated by agricultural production would soon lead to the blossoming of civilisation's first seeds.

The newest period or Neolithic lasts from 5000 until 2000 BCE. Technological innovations help to improve transportation. Rowing oars come into use (4500 BCE) and the wheel is invented (3500 BCE). The domestication of the horse (3200 BCE) and camels (3000 BCE) further advance this. The earliest seaworthy boats are around 2500 BCE, enabling the re-exploration of the Marenesian islands by early sailors occurs between 3000-1000 BCE. Around 3000 BCE, the first writing system is developed, greatly improving the exchange and preservation of information.

Eurth during the Bronze Age.

The increasing food surplus allowed the maintenance of full-time specialised workers who were not engaged in agriculture, such as merchants, weavers, metallurgists, and craftsmen. City-states appear as urban centres surrounded by politically attached communities. The taxation and redistribution of food supplies lead to the formation of governments. Other major inventions and changes for this period include: copper and bronze metallurgy, the potter's wheel, ethnic gods and state religion.

Around the 4th millennium BCE, the complexity of trade and administration outgrew human memory, and writing became a more dependable method of recording and presenting transactions in a permanent form. The invention of writing coincides in some areas with the early beginnings of the Bronze Age. These characteristics traits are the important traits that make a civilisation. Notably: the existence of differing cities, a clear governing body, often times a shared religion, a distinct social structure, written language and art.[3] Some of the earliest writings contain mentions of seven “mother-peoples” on Eurth.[citation needed] These cradles of civilisation inhabited roughly the same time period, and can be distinguished by their unique pottery and trade craft. These cradles of civilisation appear to have included: the Tribes of Yuropa and Land of Shinar in Azania; the seafaring confederation of Mari Teutā (Proto-Europan: Sea People) on the islands; the Golden River civilisation and Houses of Amari in the Orient; the two other remaining civilisations are unknown.[citation needed] The most ancient records also tell of an era when the wurld was shepherded under the careful direction of the Old Ones. They were thought to travel the oceans the way men might drive a cart across the land.

The main difference between this age and the previous is the replacement of copper and bronze tools with the much stronger iron. This has a distinct technological advantage when it comes to making iron tools and weapons. Locations that previously held an important position in the non-iron trade lose importance, while strategic iron suppliers are on the rise. The change also impacts the economic relations, requiring more trade and much specialisation. The increased trade often comes with additional taxes.

On a political level, the strongest city-states turn into small local Kingdoms. Culturally, one or more religions become sanctioned by the state. The most well-known examples of early kingdoms are Hakkad in Memopotamia, Proto-Nykian in Azania, and the Shakyan principalities on the west-coast of the Jasmine Sea in the Orient. The rise of one state leads to the decline, fall and sometimes resurgence of another.

The Classical Age lasts from approximately 1000 BCE to 500 CE. 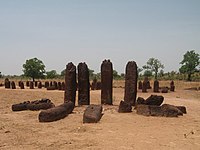 Smaller local kingdoms turn into regional Empires. Northern Europa was occupied by Buranian tribes, from pre-Thelarike and early Volsci in the north, to steppe people such as Akiiryu near Amutia. Oriental nations developed along the eastern shores, later forming the Three Kingdoms of Jaihu, Koku to Ide Jima. Island nations such as Miiros and Orioni developed on the fringes.

This period is characterised by the presence of hereditary monarchs. The elites receive their power from landowning and military dominance. Trade remains dominated by guilds to keep production low. Small-scale economic production occurs in the home. The bottom of society is made up of serfs with limited rights and freedoms. The faith in God is universally accepted, with reverence for the past and shapes all intellectual life.

Early trans-Adlantic voyages resulted in a two-way exchange of deadly epidemics, causing a global catastrophe of extreme proportions. At the same time as diseases like Smallpox wiped out much of the population of the Alharu, a ‘Marenesian Plague’ ravaged the population of Europa, spreading from its arrival in Azania to the furthest corners of the Old Wurld. This old world pandemic saw multiple waves of resurgence throughout the 6th and 8th centuries. This resulted in a roughly 30% fall in the glubal population, alongside its new world counterparts. It had a profound effect on almost all the wurld's cultures and societies. The population reduction also had climatic effects. With a significant reduction in cultivated land, forests recovered to such an extent as to cause significant cooling in the global climate. As a result, 'Little Ice Age' began in the 10th century. 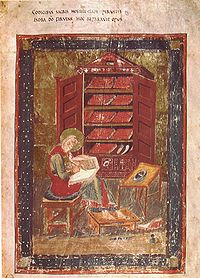 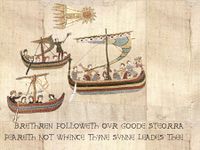 Olrik Naddoddson and his men follow the San. Early wurld maps display south at the top. 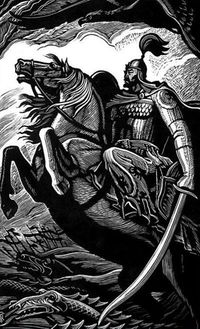 One of the first complete maps of Eurth. 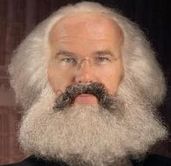 Drive the searching storm of time. Keep a sigh so far away. Fall in strait and leaden rhymes. Slow, the path is bound for them, Drive the tribes and build a State. Maids and beauty of a gem,

Formed to close the lines of fate.

This age lasts approximately from 1750-1900. Marked by strong political and industrial revolutions. This was a transitory period for much of the wurld. In many ways, the wurld was moving from the pre-modern into the modern era. Many of the geopolitical events that occurred in the 20th and 21st centuries find their original in this period.

Transition from a world of empire to a global international system organised around the sovereign state. By this time all the viable colonies were claimed, that route was closed, and future expansion would involve land conflicts.

Major wars of the 20th century