The Aroman Empire was an ancient state located in the geographical Occidental region of Epirus in western Europa on Eurth. The homeland of the ancient Aromans was bordered by Burania to the east, and Azania to the south. For several centuries, the Aromans were most powerful state in the ancient world with their armies marching to the east and south.

This name actually comes from a misunderstanding. Aroma began as a small settlement in the Occident. The city of Aroma grew into an empire which ruled over a wide area of western Europa. The administrative region of Aroma was mistaken for the name of the entire empire.

In the earliest mentions, the Arhomanoi called themselves Armân or Arumâni, depending on which of the two dialectal groups they belong to. The initial a- is a regular epenthetic vowel, occurring when certain consonant clusters are formed. The name Aroma (and other variants such as Arhoma, Arhomaneia, Eremen, Uramu, etc.)[1] is etymologically derived from the ethnonym of an early Bronze Age Occidental tribe. The name has traditionally been derived from Aram, the legendary grandson of Noah.[2] Further origin of the name is debated. The Table of Nations describes Aram as the son of Shem, mentioned in the Book of Genesis: "And from Aram there came forth the fourth tribe, inhabiting the land of the Occident between the seas of Raegea [[[Raga Sea|Raga]]] and Orankhoi [[[Ranke Sea|Ranke]]], and the lands to the north of Memopotamia." In Suverina this old form still persists, especially in folk songs, pronounced as Arămăńi or Armâni.

Elsewhere in Europa, in Sahrabic sources of southern Azania the area is referred to as ʿArūmmiye, as a Sahrabised version of its original Arhoman name. The Qur'an and older sources mention Iram as a lost city, region or tribe.[3]

The ancient Shakyans of Oriental Europa used the name Yarama. In Oharic the name Ahriman (pronunciation: /ˈɑːrɪmən/) is used to indicate a "bad/evil spirit". This originates from Aroma being an ancient contemporary of the first Orioni Empire. After the axial age of polytheism and before the post-classical era of monotheism, there existed a period of dichotomy between good and evil. While the Orient, where the sun rises, represented light and purity, the Occidental rival came to symbolise darkness and destruction. This idea was reinforced by the periods of chaos after the split of the Aroman Empire and its resulting collapse. 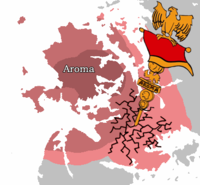 The Aroman Empire was one of the biggest in written history. At its greatest extend it included territories in much of Europa.

Dimensions of the core empire in the Occident:

330 BCE — In Occidental Europa, the boy-king Alexander of Adthens dreamed of conquering the known world. Starting in his home city of Adthens, he led his army under the $animal banner to conquer the four known corners of the Occident. His Empire would come to stretch all the way from the Great Adlantic Ocean in the west to the eastern coast of Tagmatium. 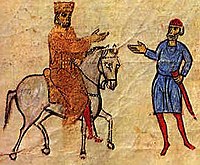 250 BCE — The Aroman Empire emerged in northwestern Europa. Built on top of the Alexandrian empire, they expanded into a much larger territory by conquering central Europa. The Empire had a policy of keeping the border tribes in a state of disarray: creating clients and allies in the Amutian tribes and reducing the power of any ambitious nomadic king through bribes and assassinations. Despite this, the Aroman Empire still experienced its share of conflict with these foreign states, sending imperial legions and hiring Azanian mercenaries from overseas to continue its expansion and protect their borders.

200 BCE — Under the rule of $Emperor, most Aroman expansion was focussed eastward. But as General $Name led his troops past the Amutian desert, another feared general, Hortensius Clarus, led his legions south through the $Mountains until he got to the outpost known to the Aromans as 'terra Azania - populus insanissimus'. His advance was stopped when, upon taking the city of Dungro in Yuropa, he demanded the king’s daughter as a concubine. She bravely slit his throat after he insisted she shave her armpits. When the retreating army brought back the general’s decapitated body and a description of Azanian women, the Aromans vowed never to set foot in Azania again.

150 BCE — (Build some boats. Conquer some islands. Meet the coastal Buran.) The Empire even at its height preferred not to send its legions across the seas into savage Burania. The Buran were, however, invited by the Aroman Empire to crew their galleys, and were given land on the coast as payment for this service. In $Year the Aromans conquered Vanarambaium, a land of Buran colonists who lived across the Ranke Sea. They evolved into a well-organised client state. The Aroman can be seen in many inscribed runestones. Society was led by a caste of warlike nobles who preferred to settle their differences by fighting. These and other Buran were employed by the Aroman Empire and paid in land grants and titles, predominately located along the rugged northern Occidental coast. They took the Empire's silver to guard the frontiers against their unsubdued kinsmen. But the empire never had as much silver as it needed. Treasury officials soon realised they could pay their mercenaries with land grants and titles. And so some Buran settled, married, planted farms, and built fortresses. This is how later Haruspex would develop.

100 BCE — The Empire projected its power into the Megálos Europa by cultivating clients and allies, who competed in an endless dance of power. Europan monarchs recognised the might of the Aroman emperor and called him their "brother". Trade across the Amutian desert was going well. Tribes that secured a hold on oases won an imperial subsidy to protect passing caravans and grew rich. The tribal warrior lifestyle that made the nomads such fierce foes, also allowed them to integrate seamlessly into the new Aroman world. Those who couldn't or wouldn't integrate were pushed into the desert, left to raise goats and camels, and raided caravans until they could plot a comeback.

0 CE — (Good: something good happens. People get rich. So rich, in fact, that it creates new problems. Potentially link this to the early development of Christianity.)

25 CE — (Bad: something bad happens. Wall built along the $Place isthmus to keep baddies out. It should be about 60 km (37 mi) long from sea to sea. We can tie this into repression of early Christians.) After decisively defeating the Amutian tribes, the Aroman Empire turned its war machine inward to stop a slave uprising. Although officially no new war was declared for nearly three decades, conflict continued to brew for years along the unstable Occidental-Oriental border. Both sides kept looking for pretexts to launch frequent, sometimes large-scale raids into each other's territory.

50 CE — The apostle Ágios Pétros (Αγίου Πέτρος) lived a life of hardship and simplicity in the Amutian desert. During his life he established monastic communities on the fringes of Aroman territory. Local tribes converted en masse, but for the most part, this conversion was nominal at best. And despite professing a new faith, they kept many aspects of their languages, social structure, and traditional practices. The fame of Pétros spread and reached Emperor $Name, who wrote to him requesting his prayers.

100 CE — Early missionaries came to Suverina. Lack of written sources suggest that it was mostly individual initiatives rather than organized missions by secular rulers, such as those going into Vanarambaium. Their influence can be detected in many areas, such as liturgical traditions, church architecture, Christian terminology, and inscribed crosses.

The Aroman Empire split into northern and southern halves

150 CE — The Aroman Empire became too large to be governed from a single location. It is split into two self-governing halves. Internal mismanagement and external threats caused the Empire to split. Its Occidental core remained, while other areas are lost. The Aroman influences can still be felt by the language ties extending as far south as the Byzantine Sea, from Byzantium Nova (west) to Mantella (east).

191 CE — The Azanian mercenaries that settled within the Empire's southern borders declared their independence, seizing control of the city of $Name and the rest of the Southern Coast. By 191 CE, clashes intensified along the southern borders. With the Aroman weakness apparent, the desert tribes united to take advantage of these new opportunities. Meanwhile, the Buran steppe tribes united, pushing west into the Empire and taking its eastern provinces. 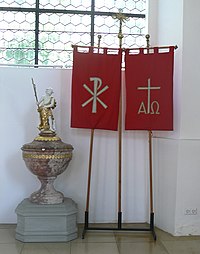 Legions used the Chi-Rho standard in their war against the Buran. One of the oldest symbols on Eurth, it lives on in several present-day flags.

250 CE — Loss of Ilisia (present-day Akiiryu), the breadbasket of the Empire, to Buranian horse raiders creates considerable problems for food security and tax income. A crisis this close to home pushed the remaining empire into a slow tumble of squabbles and anarchy.

281 CE — The sequence of events started with a further subdivision of the empire into four quarters, the Octarchy, in order to make organisation more manageable. For roughly a decade, this quickly soured as the divisions between the now four separate administrations solidified into armed camps. Added to this atmosphere of tension was the increasing friction between the polytheistic religions that were long-established in Arome and the rising monotheistic religions, inspired by the ancient peoples on the desert fringes of southern Occident. These took many forms, from mystery cults drawing on gods from older civilisations, to energetic faiths preaching about a messiah having risen but been put to death by the Aroman authorities.

296 CE — A brief but bloody civil war ended with the burning of Arhoma/Aroma/Arome. This represents to many: albeit usually in historiographical perspective: the end of the “classical” Aroman Empire.

350 CE — After the Aroman Empire fell however, a Buran leader named Sjämø landed on the northern coast to claim a supposed birthright. Historical sources remember him as a prosecutor of Christians. More Buran continued to come under the idea of claiming Aroman remnants by force. The Bishop Nidaros of Glevokastron travelled to Burania and received permission from Sjämø's son, Stan Forkbeard, to proselytize in Thelarike and beyond.