Kirvina, an exarchate straddling the southwest of the continent of Aurelia, is a decentralized elective monarchy that claims political hegemony over the the Várcheia peninsula, and cultural hegemony over all land west of the Sagraphas (Anglish: Sarthus). Surrounded on all sides by the Aurelian Steppe, its nearest neighbors are Mito to the north-west, Zaxar to the east, and Rhodellia to the north, bounded on its west side by the Gulf of Auriel. Kirvina is 561,043 square kilometres (216,620 sq mi) in size, and possesses a population of approximately 37 million. It is divided into 39 provinces, 13 of which comprise the historical Dekatrapoleis (Anglish: 13 Cities) or historical urban centers, 6 of which comprise the Stratikai or border-garrison provinces, and the rest of which are administered without special status. Its capital is the city of Akhileia (Αχιλεια), nestled in the Bay of Lernaea to the nation's eastern half, while its largest city is Taurapetra, commanding a dominant position to the western jut of the peninsula. The official language is Ilene (Ιλενε), sometimes referred to by other Aroman cultures as Kirvíneiká (Κιρυíνεικά) or Kirvinian Laimiaic (Κιρí-Λαιμιεικά), as it is a relative of that language which has diverged over many centuries of colonial separation. The primary religion is the Following of the Unconquered Sun, or Ílios Aníkitas (Ήλιος Ανίκητας), also called the Aroman Old Faith by the Anglish.

The history of Kirvina begins not in Aurelia, as one would expect, but in Europa. During the later periods of the Aroman Empire, it came under attack on all sides by encroaching powers. Faith in the government waned, and unstable Imperial lines begot regimes held fast by the generals, rather than any civilian authority. Under this backdrop, ethnic and religious tensions also loomed, especially the nascent Christianity. A number of non-Christian noble families in the Empire's southern provinces fell under the leadership of Lysandros Tagaris, the contemporary magister navis or commander of the navies, who had led the defense of the frontiers for quite some time. Repeatedly snubbed by the Imperial court and perceiving blocks against his influence, Lysandros attempted to revolt in 288 CE by seizing the Aroman navy, garrisons, and much of the southern civilian population. He did so in the name of reviving Arome's Laimiaic influences, and to restore the classical image of the Empire. This Lysandrian Coup (undertaken in the year 288 AD) went catastrophically poorly: its disjointed pieces often failed to link up, and were destroyed by government elements before they could join the main body. Without enough siege equipment to storm Proculmea, and without time to prepare more, Lysandros authorized a journey west, chasing rumors of islands that could be settled there. Once again, Lysandros failed, not making the necessary calculation adjustments to convert his informants' distance units to his own, and drastically overshooting the islands they were referring to. However, fate would intercede and save Lysandros, turning him from a failure into the founding father of a continent. Favorable currents and good wind brought the Lysandrian Fleet in sight of Aurelia within weeks, sweeping it around the Cape before winter set in and landing it near the modern city of Coeaneia. The phenomenon of large groups of people traveling overseas which began with Lysandros was later observed in Seylos, Iverica, and others; this led to the name Journeyism being coined for it.

What followed was the mass disembarking and colonization of the region, spanning the period from the 4th to 7th centuries. Cultural exchange between Aroman and native cultures occurred heavily in this period, transforming the language, cuisine, and architecture of the colonists from an ailing shadow of old glory to something new and entirely distinct. It is debatable whether this colonization was beneficial to Aurelia's people: while the proliferation of Europan disease destroyed the cultures and peoples in the regions they directly colonized, their imports of cattle, pigs, horses, metalworking, mathematics, and architecture drastically reshaped the Aurelian continent, and the immunity the Kirvinans conferred would severely blunt later Europan colonial efforts and ensure some degree of native sovereignty survived. Aroman civilization gave Aurelia its name, Tagaris' descendants having betrayed his original vision of the nation as an Exarchate by elevating themselves to the purple and declaring an Aurelian Empire. The extent of Aroman settlement was far wider than remains today, comprising the so-called Southern Provinces (Κιρυíναcτíρια), Island Provinces (Íοcτα), Western Provinces (Μινολα), Eastern Provinces (Νεροντάρια), and Middle Provinces (βουνóντάς). The following centuries saw the Empire's expansion, but also its slow decline, and the increasing transfer of power to semi-democratic institutions such as the Senate. A series of disastrous economic decisions compromising lucrative Europan trade networks, an inept monarch, and the loss of the essential navy against the Mitonese led to the Empire's collapse in the early 1500s. Over the course of the next century, revolts, invasions, and other issues led to the destruction of all Aroman states outside the Southern Provinces, which were reunified after much struggle by the senatorial Damoras family.

Most of Kirvina's modern political situation revolves around its role as the gateway to Aurelia for Europan and other foreign powers. It has a strong relationship with both Tagmatium, as a friendly heir to the same legacy, and Iverica, as longtime economic partners and co-combatants in the Aurelian and Thallassan regions. Since the turbulent times of the distant past, Kirvina has enjoyed a slow and steady growth even as the world around it has crumbled. Its strong sense of loyalty to the monarchy and openness to democratic reform has enabled it to persist through the last few centuries without a mainland invasion of any kind. Kirvina is considered an Aroman nation in its own right and a center of music, calligraphy, architecture, and tourism, being the safest place to visit in Aurelia. Its relatively decentralized population enjoys high individual land ownership and well-developed rural infrastructure, benefitting from an economic system that encourages the prosperity of the citizen, while its industrial sector is highly automated. Considered a regional power due to its wealth, power projection over the Aurelian Steppe, and robust navy, it is an observer in the EOS and founding member of the Aurelian League, which has long sought to bring the nations of the continent together in the hopes that one day they will march on the ground rather than merely on paper. 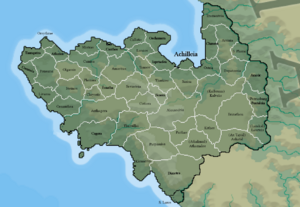