Esonice is an island nation situated in the Esonian archipelago, surrounded by the Tiauhai Sea, which Esonians call 'the Sea of the Moon' (Esonian: Motsu no Koshin) and the Sea of the Rising Sun (Esonian: Motsu no ---) in the North Oriental Ocean, compromising of an archipelago of 4 major islands, 3 minor islands and --- smaller islands. The major island Esonice occupies is the island of Hirosho, which is the biggest island in the archipelago, and two smaller but noticeable islands in the south that are the islands of Mibiveshi and Lisharishi. All together, Esonice holds 254 in its possession; but only 20 of those are inhabited permanently. There are 234 remote islands with no inhabitants, 48 of those were turned into protected wildlife reserves.

Esonice has historically been divided into 8 regions, those regions being: 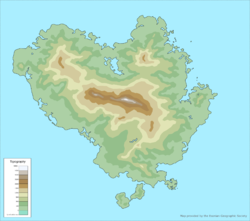 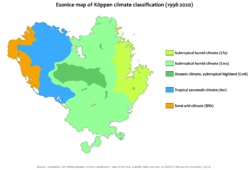 Eastern & southern Esonice, unlike the north-west portion of the country, have 4 distinct seasonal variations. Those seasons are winter which characteristics consist of temperatures are colder than most of the year and less amounts of rain. Spring or what in Esonice it is known as the 'floral bloom' season were flowers across the nation start blooming. Summer which characteristics consist of warm to hot temperatures and mass amounts of rainfall, this is were the Esonian psuedo monsoons take place in the year.

Aloe Vera plantation in ---, important in medicine and Esonian cuisine