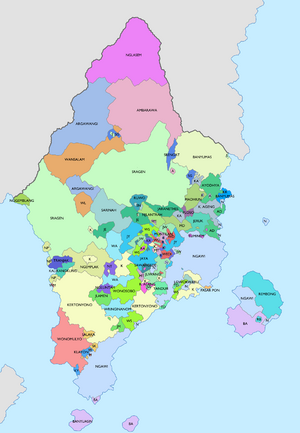 Kertosono is divided into 42 first-level administrative divisions (more commonly known as "constituent states") falling under seven different categories of subdivision based on each division's status before the treaties of unification were signed in 1901. As per the 1927 constitutional amendment, each administrative division posseses nearly the same powers and delegation of duty as the others, with the exception of the constituent kingdoms of Kertosono which have much more power over their own internal affairs, and the abolishing of administrative divisions was made lengthier to avoid smaller constituent states from being absorbed into their larger counterparts. As per the 1927 constitution, the seven categories of administrative subdivisions in Kertosono in order from highest to lowest status are the karajan "kingdoms", kabupaten "regencies", kadipaten "grand duchy", kapaten "duchy", kapangeren "principality", Siti "land", and Kuthoroyo "province-level city".

The internal borders of the constituent states have remained unchanged since 1927, although much of the borders which existed prior to 1927 mimicked the current borders except for a few border changes and some constituent states merging with other constituent states. With a unified Kertic state being a very new concept in the timeline of the Kertic peoples, and along with a compromise made to achieve Kertic unity, the once-independent small and fractured Kertic states were guaranteed territorial and governmental integrity within the framework of Kertosono, and the fractured and messy borders from the warring and small-states period of the nation was inherited, and could still be seen today. Efforts to tidy and make new divisions based on geographic and cultural factors in the past have failed.

Under 1901 treaties of unification and compromise, the previously independent and sovereign Kertic entities forwent their individual sovereignties in order to form the Empire of Kertosono, a federation originally comprised of 52 states and political entities. These once sovereign entities were allowed to retain their pre-unification borders and boundaries, including all exclaves and enclaves outside the core realm of each entity's possessions. The status of government within each respective entity was respected, and the status of the new constituent states of the Kertic Empire were retained, giving birth to six classifications of first-level adminsitrative divisions of the empire. While in theory the 1901 constitution guarantees equal rights and delegation of powers from the central government to all the constituent states, the stronger and more-prestigious subdivision types, namely the kingdoms and regencies, were given the most leeway and recognition, while the lower types of subdivisions were subject to greater interference from larger powers such as neighboring states and the central government, thus creating an informal hierarchy of subdivision categories within the new Empire.

As a result, many larger entities absorbed smaller entities under the pretext of cooperation and the strengthening of mutual ties, thus slowly reducing the number of individual entities the Kertic empire possesses. By 1925, the number of 52 states had been reduced to 41, with many smaller entities joining their larger neighbors. A special case was observed in 1921, when the Duchy of Blora and the Duchy of Aryoseno merged to form the Grand Duchy of Wringinanom, rather than getting absorbed into one of their larger neighbors. In an effort to stop and retain a balance of power between the smaller and larger constituent states, a new constitution was passed into law by Parliament in 1927 forbidding the absorption of smaller entities into larger states, thus protecting the powers reserved for the smaller states. Another stipulation of the new 1927 constitution was the creation of urban-localities and subdivisions ranging from the first to the third level. 1st level urban localities were equal in power to the constituent states of the empire (named Kuthoroyo), while in the 2nd level, the term 'Kuthamadya' was created, having equal powers with divisions of a constituent state, with varying powers given to the Kuthamadya depending on the constituent state.

Until the present day, there has only been one creation of a Kuthoroyo, the City of Banyumas, which also happened to be the capital of the regency, separated from the Regency of Banyumas in 1931. Voters in the City of Banyumas overwhelmingly voted to split from the regency, as it was itself an exclave from the bulk of Banyumas's territory. The regent of Banyumas at the time protested such decision and act, citing concerns over political and economic stability of his regency, and nullified the separation of its own capital. In a compromise led by the Kertic Emperor, Banyumas was to be its own constituent state of the Kertic Empire, although in doing so must annually give rebates towards the regency of Banyumas equal to 8.79% of the annual profit of the city, as well as several services being coordinated between the two, such as education, healthcare, and police. Various Kuthamadya have been formed after the creation of such categories, most notably the Kuthamadya of Ngawi. Voters in the City of Ngawi narrowly rejected to become a Kuthoroyo similar to Banyumas prior in 1931 in the 1956 referendum, thus staying within the helm of the Kingdom of Ngawi. Similar propositions were also held in Kertonyono and Sragen, although they too were rejected with even larger margins.