The Kingdom of Ateenia is a nation in Argis on Eurth. Its freezing lands consist of large forests, thousands of lakes and rivers, mountains and volcanos, waterfalls and hills, valleys and rocky beaches. There are over 4 million people living in Ateenia, out of which 14% live in the capital Atha and its surrounding areas. Ateenia's total area is 316,570 square kilometres (122,230 sq mi). The Kingdom of Ateenia shares a border with the United States of Prymont that lies just west of Ateenia and Mokhavic Federation, which lies south-east of Ateenia.

Ateenia is ruled by the divine queen Ena Kalinka of House Kalinka, a dynasty which has ruled Ateenia for almost 2 thousand years. The queen is advised and assisted by Konráðið, composed of 23 Jarls, all of whom rule their own Jarlodoms that fall under the queen's absolute rule. Under the Jarls of Ateenia. The Kingdom of Ateenia was founded in the year 46 AJB (After Jorlings birth)(118 CE) when the legendary king Jorling Kalinka united the jarldoms, tribes, and clans under his dynasty. The governing system that was in place since the foundation of Ateenia, remains in place to this day, with only a few added additions. Because Ateenia was founded under the guidance of the gods of Vjöld, it remains true to Vjoldinism to this day and because of it, is considered sacred ground by the followers of Vjoldinisim.

The economy of Ateenia is a developing/emerging, middle/high income mixed economy with a high Human Development Index and a skilled labour force and a decent welfare system with free healthcare and cheap education. In the past 6 years, the Ateenian economy has suffered stagnation, with occasional increases in growths and occasional downfalls in the growth. In 1944 (2016 AD) the economy growth was -5.2% and in 1947 (2019 AD) it was 1.2% of economic growth. The unemployment remains strong at 17% compared to 1943 (2015 AD) when it was only 7.6%. The main sectors of Ateenian economy are mining, industry, fishing, and services. Ateenian volcanically active areas are also rich in minerals that have kept the Ateenian economy on its feet for millenias. Ateenian free market also relies heavily on import and export, so foreign relations are crucial for the survival of Ateenian economy. 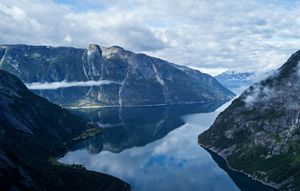 The Kingdom of Ateenia is located on the Canamo peninsula and sits on Arcton plate. Ateenia borders 2 other nations, United States of Prymont to the west, with whom Ateenia shares the Midgor mountains (officially Kongshaug Peaks) that have the tallest mountains in the Argis continent like Vrjolnfjall reaching 8281 m and Estridfjall reaching 8191 m, in south Ateenia borders the Nation of Mokhavia which shares the Konalla lake (Nanay lake officially) with Ateenia. To the north of Ateenia lies the Norðursjó, commonly known as Argic Ocean, which is the northernmost ocean of Eurth. The nation is mostly inside the subarctic climate zone, where summers are short but warm and winters are long and cold. Huge part of the land is covered by boreal forests, which makes up around 61% of Ateenia. The Western regions of the kingdom are mountainous and volcanically active, with large river valleys.

Most of the Ateenian people live in the southern areas of Ateenia because of the warmer climate and fertile land suitable for farming. Today the southern regions are covered by rural and urban settlements, most of which run alongside the Midvun river.

The first signs of human activity on the modern Ateenian lands date back to more than 10,000 years ago, when the southern lands of Ateenia were inhabited by hunters, fishers, and gatherers. The most well-preserved evidence of such people are stone tools and carved standing stones.

Signs of the first people in more inland and northern parts of Ateenia, date back to around 6000 BBJ (around the same time in BC) as proven by paintings and rock carvings in caves and more advanced stone tools in that region. There are also frozen mummies of a tribe that got buried in snow and ice that date back to that time period, which were found in 1910 ABJ (1982 CE), nicknamed "Ísfjölskylda" or "Ice Family". It is thought that people in that area lived mostly in or near the caves, ridge valleys and mountain passes to avoid the cold wind of the north but took the risk of getting killed by avalanches.

The first farming started around 3000 BBJ in the southern parts of Ateenia and became common between 2400-2000 BBJ.

The Kingdom of Ateenia is ruled by House Kalinka, which rules over all the kingdom with complete power. The heir to the throne is elected by the council of jarls, known as Konráðið, that govern their piece of land under the guidance of the Queen or King. The ruling monarch has the ability to revoke the title of any jarl, if he/she so pleases. The monarch appoints 13 ministers (Ráðherrar), each of who is in charge of their ministry. Anyone can become a minister if their deeds and skill catch the monarch's eyes. Villages, towns, and cities are governed by the elected Chief (Shöfðingi) who is elected by the citizens of his settlement. There are usually two candidates for the spot and are hand-picked by the jarls of the land. Shöfðingi can only govern his/her settlement.

There are 13 ministries that govern under the monarch's guidance.