Rosenstadt, or the Free City of Rosenstadt, is a small region within the greater nation of Dolchland. The city was founded in 891 by Otto Konig, who decided to settle the area due to its bountiful rose fields, which is also what inspired the now flag and coat of arms of Rosenstadt. The region is physically land-locked by the states of Sohenburg to the North and Almstadtloc to the south. Despite being one of the smallest states within Dolchland, it has a very large population of 195,000 people, which is quite impressive.[citation needed] The city of Rosenstadt itself, is located on a minor river that runs through the Rosenstadt valley, known as the river Nukis, and the small city state is composed of 13 minor "counties" whilst also being split into two regions, this being the Northern Highlands "Hochland" and the Southern Lowlands ``Tiefland".

Flag and coat of arms

Rosenstadt's Coat of Arms, comes from its plentiful rose valleys that for centuries were a common symbol of the city and its surrounding region. The Cities founder, Otto Konig, would incorporate the red of the roses, as well as the image of the rose itself and combine it with his house's color of gold yellow, to create the city's now signature coat of arms. The flag of Rosenstadt was designed after the city transitioned into a republic, it incorporates the red from the roses and the gold from the Konig family, and white to represent the city's peaceful and hopeful future. The Coat of Arms was added to the flag after the citizens complained that the current flag was not "patriotic" enough. 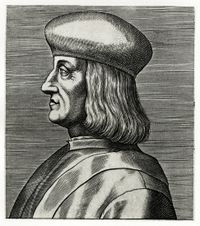 Otto Kunig the First. Founder of the city of Rosenstadt.

Rosenstadt (The city) was first founded by Otto Konig in 891. The city was established as a trading outpost along the River Nukis, with a nearby fort (Rosenstadt Castle) to protect it from neighboring states. Soon, the city would come to be known as Rosenstadt, as nearby travelers and traders would often remark at the bountiful and beautiful rose fields of the valley. Initially, the city relied heavily on its fertile plains and its profitable agricultural sector to boost its growth. This would attract many people who would travel to the city in search for work. This is what sparked the first population boom of the region, and the city would soon grow into a large settlement. By the death of Otto Konig in 923, the city became a large economic powerhouse in the region, and through a series of purchases, would expand beyond a city and into a City State.

Following the death of Otto I, and the subsequent induction of Otto II, Rosenstadt would undergo a rapid expansion. Otto II would come to use the great wealth gathered by his father in order to purchase the entirety of the valley surrounding the city in 926, and would officially go from a lord, to a Prince and head of the newly established City State of Rosenstadt. The purchase provided more land for the growing state, and soon the people of Rosenstadt would begin to move outwards, as the city became inhabited by nobles, and as the less well off farmers and peasants would move to the small towns and villages that would spring up across the valley. This would also mark the destruction of the old Rosenstadt castle, which would be transformed into a palace for the growing nobility.

As the City State expanded, the northern territories would provide Rosenstadt would rare Iron deposits, subsequently helping create Rosenstadt's second-largest city, Schwarzfel, which began as a mining town, but would eventually come to possess one of the best forges in Dolchland. By 951, and the death of Otto II, the state was on its way to becoming a real power within Dolchland, and Rosenstadt City would become renowned for its wealth and rapid growth.

After the death of Otto II, his son Fritz would take up the responsibilities of the state, becoming Fritz I of Rosenstadt. Not long after, Rosenstadt itself would begin to stagnate. This was partly due to the Nobility beginning to buy up fertile land in southern Rosenstadt, and removing the previous farms and estates for rose fields, which heavily damaged the economy of the nation. Furthermore, their habit of not paying taxes to the state, effectively left a large portion of the nation's economy trapped, and unable to circulate. The excessive spending by Fritz I, did not help, as he gradually used up all the wealth his father and grandfather had accumulated. By 967, the state had inertly run out of money, and Fritz reluctantly had to borrow from the nobility to prevent his nation from collapsing. Fritz would even have to give up his family's held lands in the North, just to make enough money for the treasury. Most cities in Rosenstadt became entirely owned by a select few of the nobility, and they would continue to leach more and more power from Fritz until he died in 983 (Some believe he was assassinated, although this may not be entirely true), and his youngest and only living son, Lukas would take up the mantle of prince. Being only 9 years old, he became a puppet of the elite, who would form a "council" composed of the biggest landowners within Rosenstadt, to manage the nation.

Surprisingly, the council would agree to "sell" (Although it was more like renting) their land to the lower class in the hopes that their previous mistake of transforming the land would be "fixed". Although it helped some areas return to agriculture, many land plots were so expensive that only other council members could afford them, which over time would lead to them stopping this "selling" of land, as fellow council members would begin to buy up each other's plots. Much investment was put into the North, hoping that the Iron mines and forges would be able to help replace the previously large agricultural sector, which did help, but only short term as eventually there wasn't enough demand for iron tools or goods throughout Dolchland to satisfy this intensive mining.